More than holes, poles, and trenches

Joe Lanni and Alex Agius, co-founders and co-CEOs of Distinct Infrastructure Group, each bring a special set of skills, strength, and experience to the table; a symbiosis and synergy that’s served them well since starting the company in 2007. What began as a start-up in Joe’s garage is now a publicly traded firm on the Profit 500 Fastest Growing Company in Canada list, servicing telecommunication companies, utilities, and governments across North America from ever-expanding facilities in Ontario, Manitoba, and Alberta, Canada.

Lanni shares the back-story: “I grew up in construction and went to university to study finance. But I dropped out because I’d started a business to pay for tuition and that business became so big I couldn’t do both. So, I decided to continue with the company, instead. Alex comes from the industry, as well. He started at 18 on the technical side of the business and worked his way up through different management and executive positions.”

The two met in 1999 when Lanni was running a small family business and sub-contracting at the company where Agius was VP of Construction. Fast forward to 2007 – they were both looking for the next thing to do and saw an opportunity developing in the infrastructure space, particularly with the communications sector. So, they decided to start Distinct Infrastructure. Lanni recalls, “Fiber to the home was becoming a very real thing and a lot of people we’d dealt with over several years in the business were looking for capable, reliable partners or vendors. It proved to be a good opportunity for Alex and me.”

The company began as a niche service provider, working on specific types of projects, and evolved into a full-service, turnkey solutions provider to anyone who owns a network. Full-service means they can handle any size of project from conception to completion, or any aspect along the way. That includes all related services, such as survey, design, engineering, construction, as well as maintaining and servicing those networks after the fact.

“We’re not a get into town, do a build, and then get out of town type of company,” says Lanni.  “Our business model revolves around establishing multi-year, master service agreements with our clients that allow us to continue servicing that customer on their projects as a whole, not individual projects. We’re there as a long-term partner for future construction needs along with the service and maintenance aspects their network demands.”

Distinct Infrastructure is expanding its footprint across Canada through an acquisition strategy that represents the next evolution in the company. Rapid growth has been achieved organically over the last decade; acquisitions will now be an integral part of that growth going forwards. Continued diversification of the customer base as they expand customer concentration is key to the goal of servicing the majority of Canada’s largest blue-chip companies. There are currently about 540 employees on the firm’s payroll, operating out of the Toronto headquarters and offices in Edmonton, Alberta and a recent acquisition based in Winnipeg, Manitoba.

“We’re currently involved in Toronto with Bell’s fiber-to-the-home initiative,” Lanni explains. “Back in 2015, George Cope – the CEO of Bell Canada – made a huge media announcement that they would spend $20 billion to enhance their network capacity across Canada. Roughly about $1.2 billion was to be spent in Toronto, alone, and Distinct was named as one of the key service providers to help them execute on that requirement.”

The competitive landscape in the infrastructure industry is very fragmented. A lot of regional service providers are typically mom-and-pop or family-type businesses that stick to their specific towns or cities. In some of those cases, a larger contractor may have 100 employees. Distinct Infrastructure is one of only a handful of national service providers that can take on large-scale projects in a full service turnkey scenario in multiple regions.

Lanni attributes the company’s ten years of success to “our people, our systems, and our ability to execute on our customers’ behalf. Our people have a wide range of skill sets – everybody from technicians in the field that dig trenches, to hydro-vac operators and directional drill equipment specialists, to guys that go on the bucket trucks and climb poles, fiber splicers and cable TV technicians, gas fitters and pipe welders, all the way to our engineering staff.”

Add to that a fleet of over 700 pieces of equipment and vehicles, and the importance of having that amount of resources can’t be understated. More than 80 percent of the company’s work is completed by Distinct’s own employees. Less than 20 percent involves sub-contractors, mostly during peaks in demand when additional resources or specialized services are needed that aren’t economical to offer internally. Sub-contractors are never allowed to work on a jobsite without management supervision.

Safety is paramount. “We do thousands of hours of staff 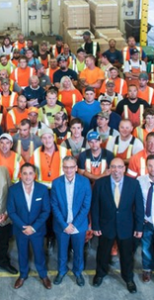 training,” says Lanni. “Both health and safety, and technically related. Continually reinvesting in our team is an important part of our culture. As we’ve continued to grow almost 50 percent a year for the last seven years, our health and safety record has actually improved. We’re very proud of that, it’s a clear indication that we’re growing responsibly. Two years in a row we’ve scored 100 percent on Bell Canada’s annual health and safety audit. When you realize that we go in and out of confined spaces more than 10,000 times a year, that’s a pretty good track record.”

The nucleus of the company is the “control center” – a process-driven, software-supported group that handles the flow of projects and information. From the minute a project is issued by a customer, through the various steps of completion, until it’s ready to be invoiced, the control center knows the status of that project in real time. The information can then be relayed back to the customer to make a decision. A definite value-added proposition for clients. For the company, as operators, it ensures assets are never sitting idle; they’re always used in the most effective way possible.

“That customized software has taken us six years and thousands of man hours, and hundreds of thousands of dollars have been invested,” Lanni notes. “It continues to evolve and become more robust with every revision. At any given time, we can have between 2,000 and 3,000 projects valued between $500 and $500,000 being managed by our control center. And the technology is all done in-house. We just recently launched tablets that eliminate paperwork for staff in the field. It’s all wireless, supported by the cloud, so information can be entered on the jobsite and immediately input into the control center.” Health and safety paperwork is a daunting requirement for field staff, often taking 30 minutes every morning. Using the tablet cuts that time in half, improves the quality of information, and eliminates human error.

What’s really driving Distinct Infrastructure is the race to get fiber to the home and increase bandwidth on existing networks. That’s its bread and butter; where it excels every day. Lanni adds, “We also work for hydros – there’s ten-to-twenty-billion dollars being spent on the electrical side of the industry and a five-to-ten-billion-dollar telecom opportunity in Canada. On the carrier side, we expect the new 5G cellular platform will be as big an opportunity as fiber to the home, if not bigger. It requires micro-cell sites, so instead of seeing big towers across the city, you’ll see devices the size of a laptop strapped to a hydro pole or the corners of buildings.

“In 1 sq. km. you’ll need 37 micro-cell sites per carrier. So, times that by four in Toronto. Plus, 12 km. of new fiber for every km. of micro-cell sites, because they’re all linked by fiber. Based on industry numbers, Toronto would need a multi-billion dollar investment between the four carriers to deploy 5G. That’s just one Canadian city. Eventually, everything from drone control, virtual and augmented reality, self-driving cars, even the increase in bandwidth consumption on our cell phones will rely on 5G. It’s the future – and another 10-year opportunity for us.”

There is no shortage of opportunities ahead for Distinct Infrastructure. The challenge lies in having the resources in place and effectively deploying them to maximize revenue and margins. Something this innovative company looks forward to tackling.

Check out this handpicked feature on milliCare – A company on the move.

WHAT: Infrastructure and environmental services provider

WHERE: Headquarters in Toronto, Ontario 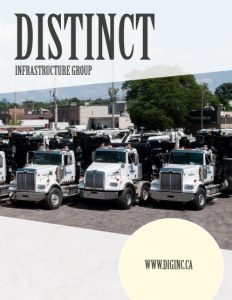