Queen city of the Coosa

Business View Magazine interviews representatives from Gadsden, Alabama, as part of our focus on best practices of American cities.

Gadsden, Alabama, with a population of approximately 36,000, is the economic, medical, and cultural focal point of the northeast part of the state. It is the county seat of Etowah County, but its assets and amenities draw people from five surrounding counties with a combined population of about half a million. 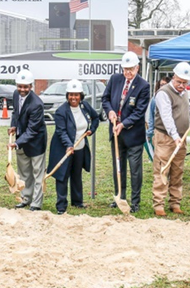 Named after General James Gadsden, the city was founded in 1846. It is located on the Coosa River about 56 miles northeast of Birmingham, 90 miles southwest of Chattanooga, Tennessee, and 118 west of Atlanta, Georgia. Gadsden was, at one time in the 19th century, Alabama’s second most important center of commerce and industry, trailing only the seaport of Mobile. The two cities were important shipping centers: Gadsden for riverboats and Mobile for international trade. For most of the 20th century, Gadsden was a center of heavy industry, home to the Goodyear Tire and Rubber Company and Republic Steel.

After many of Gadsden’s major industries, including its major steel plant, closed in the 1970s and 1980s, the city began to decline, but today, the city government, which owns a good deal of developable land along both sides of the Coosa River, is embarking upon a comprehensive process of revitalization that seeks to protect, enhance, and promote the city’s stature as “Queen City of the Coosa.”

One of Gadsden’s major renewal projects is the conversion of a former K-Mart building and grocery store into a new convention space called The Venue at Coosa Landing. “The construction started in January and is scheduled to be completed by late July,” reports Shane Ellison, Assistant to Mayor Sherman Guyton. “It was about a $12.5 million project. The K-Mart, itself, comprises 90,000 square feet. We demolished about 40,000 square feet of that in order to provide for more parking. We retained 50,000, which is being converted into the convention facility and then there’s an additional 20,0000 square feet attached to it, that was formerly a grocery store, that is being retained and spruced up for future commercial development or future public use.”

“The beautiful thing about that property is it’s almost immediately adjacent to the Coosa River, which flows through the heart of our town,” Ellison continues. “There is a four-acre green space that the City of Gadsden owns and then just east of that is the new convention site. So, we are hopeful that the convention space will be the catalyst to develop the four acres on the river.”

The city also recently reconstructed Airport Road which connects the city to the airport. “We went from a two-lane, tar and gravel road to a four-lane, major highway,” Ellison notes. “And that also included major water and sewer upgrades to service the several hundred acres that we have available at our airport industrial park. So, we are ready to go. “While our Goodyear plant is closer to the downtown core, a lot of the Tier Two and Tier Three auto suppliers are at the airport industrial complex,” adds Eric Wright, Public Affairs Coordinator for the city. “So, they’re all connected to that upgraded infrastructure and road. It’s a corridor that we can use to attract more industry.”

Meanwhile, Ellison says that downtown Gadsden, an area about three blocks wide and seven blocks long, is almost fully developed, with a business occupancy rate of over 90 percent. “We have one of the nicest and most prosperous downtowns in the state,” he declares. “Downtown Gadsden, Inc. (a nonprofit community partnership dedicated to fostering the economic development of downtown) is often cited as the highest functioning organization in the state as far as the Main Street Alabama program goes. In addition, there are probably upwards of 20 lofts downtown, and 75 percent of them have been developed in the last three years, so there’s not a whole lot of opportunity for redevelopment there, other than to support the existing businesses.”

Nonetheless, Ellison reports that, just this past year, the city took an old auto parts warehouse and converted it into a farmers market, which has now “morphed into something far beyond that,” he states. “While we still hold the farmers market a couple of days a week, it’s now rented, frequently, for parties and special events. So, that investment has caused others along that same route to reinvest in their properties, as well.” Finally most of downtown Gadsden has now been designated as an official Entertainment District, allowing for the consumption of alcoholic beverages between 4PM and 10PM under certain conditions.

Wright adds that another city initiative calls for the completion of a 13-mile trail system that will join and extend the Black Creek Trail that runs from the city-owned Noccalula Falls Park, along the Black Creek Gorge. “The river is a big driver for us,” he explains. “We have bass tournaments at the Coosa Landing Marina every weekend, so we’re trying to connect to the ecotourism and outdoor sports community.”

Once a thriving industrial city, today’s Gadsden, Alabama is working hard to reinvent itself. And its city leaders are optimistic – especially in their plans and programs to revitalize the riverfront. “We have a river running right through the heart of our city and so, we have opportunities that other folks would kill to have,” Ellison avers. “We own quite a bit of property either immediately on the river or overlooking the river. So, we are in the unique position to own a great percentage of the developable riverfront property.”

Going forward, it looks as if the “Queen City of the Coosa” is primed to retain its title.

Check out this handpicked feature on Goodyear, Arizona – Geared for growth.

WHERE: Northeast Alabama on the Coosa River 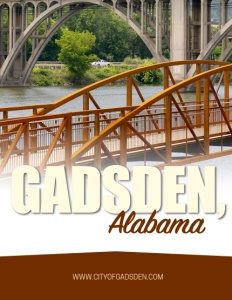