Business View Magazine interviews Cris Burnham, President of StorageMart, as part of our series on Innovations in the Self-Storage Industry.

Self-storage leader, StorageMart makes its mission clear to customers right up front: “We know there are a lot of places you could store. Our goal is to be the place that brings you peace of mind and keeps you happy, no matter what your storage need or moving circumstance. We aim to provide the cleanest storage space with the friendliest service. If we fail to live up to your expectations, your next month of storage is 100 percent free. No strings or fine print – we want you to be completely satisfied with your storage experience.”

Cris Burnam, President of StorageMart, has been working in the self-storage industry since 1987, as part of his family’s storage business. Today, Burnam oversees all aspects of the organization, with a strong focus on long-term planning and goal setting. Soft spoken, knowledgeable, and forward-thinking, Burnam’s passion for the family biz knows no bounds – a successful foray into the U.K. realm of self-storage is proof positive of that.

StorageMart is headquartered in Columbia, Missouri, two hours from Kansas City and St. Louis in “the heart of fly-over country.” According to Burnam, the company began with a rainy holiday in Texas. “Back in the early ‘70s, my father was a home builder in the mid-west. When I was 10, we went on a holiday to Brownsville, Texas and it rained the entire time. What do you do with a bunch of kids when you’re on vacation and it’s raining? Well, in my family, you went out and looked at real estate. Dad kept going to this self-storage complex (the first he’d ever seen) and visiting with the owner. Finally, the man said, ‘Look I can tell you’re thinking about getting into the business. So, give me ten bucks and I’ll tell you how I did it.’ Dad agreed, came back to Missouri, and in 1973 built one of the first self-storage complexes in the mid-west.”

That company was sold in the mid-1980s, and Burnam and his brothers joined their father in a new venture. In 1994, they created a Real Estate Investment Trust (REIT), did an IPO on the New York Stock Exchange, and took the family business public. It grew rapidly, from about 60 locations to 250 in five years. Burnam recalls, “It attracted the attention of our biggest competitor, Public Storage, and they launched a hostile takeover of our company. It ultimately became friendly but, end result, we had 500 employees on a Friday and only 10 on Monday. And I was related to three of them.” What to do next?

Armed with a bit of money and a lot of contacts in the storage business, Burnam and his brothers went to Wall Street, eventually forming a partnership with Warburg Pincus. Thanks to an influx of investment dollars, they rolled out a line of self-storage facilities that were bigger, better, easier to use, nicer locations – a whole new generation of product in major American cities, including New York, Chicago, and Miami. The business continued to grow and do well, but the problem with raising Wall Street money is at some point, they want it back. When that time came, StorageMart bought Warburg Pincus out by partnering with a high-net-worth individual who continues to sponsor them, today.

Burnam explains, “Our partner did a lot of business in Canada and suggested we expand north of the border. But every time we got close to a deal, Toronto-based, InStorage Real Estate Investment would swoop in, overpay, and buy the location. The numbers just didn’t make sense to us. So, we did our homework and realized these folks knew how to spend money, but they didn’t operate properties very well. As a result, we started slowly buying their stock and, in 2009, bought the company, and became the largest operators of self-storage in Canada with 70 locations.”

Fast forward to 2016, StorageMart bought the sixth largest storage firm in the U.K.; today they have 16 locations in London and southeast England – over 200 locations in total, with over 13 million sq. ft. of real estate. Annual revenue is about $200 million U.S. – 65 percent American, 30 percent Canadian, and 5 percent U.K. On a net operating income basis (NOI), StorageMart is a $125 million company.

Implementing state-of-the-art systems, such as the StorageMart website, sets the company apart from others in the industry. Customers can go on the site, find the unit they need, pay for it, and be done in just a few moments. Whereas, many competitors still don’t put their prices online. Seventy percent of StorageMart customers are residential. Business clients make up the other 30 percent – mainly small companies and entrepreneurs that have run out of space in their basement or garage for service vehicles and inventory. Self-storage is often more flexible and cheaper than renting a warehouse – and a great place to incubate a business.

Storage units range from a 5 ft by 5 ft space, up to the size of a two-car garage, and climate-controlled heating and cooling is an option. Competition in the U.S. self-storage market is diverse, with thousands of companies in operation, everything from sole entrepreneurs with one facility, to large companies that own dozens or hundreds of facilities. In Burnam’s eyes “Canada only has two main competitors – Public Storage and Access Storage – both good companies, we just think we’re a little better. All our properties have strictly controlled access with a gate, key pads, and video surveillance cameras. They are brilliantly lit, so you feel completely comfortable accessing your storage unit, any time.”

StorageMart is also a champion of community service. To that end, it operates a program called “Store It Forward.” Burnam explains, “We believe that each of our properties is here to serve the local neighborhood. If you have a charitable initiative and you want to partner with us, or if you need storage space for a toy drive, for example, just contact us and we’ll rent your charity storage for one dollar per month. We work with thousands of organizations in North America and the U.K. on that, donating over $400,000 per year in rent to charitable groups. In Canada we have a sponsorship with Skate to Great, providing skating equipment to underprivileged kids. Combined with our American Red Cross sponsorship and Cancer Research UK, we contribute in excess of $150,000 annually to support these efforts.”

On the green front, StorageMart partners with various groups to harvest solar power. They’ve installed several thousand square feet of solar panels on the roofs of their buildings in Ontario, Canada, alone. They also have a property in the U.K., powered almost exclusively from solar panels. “One thing about the storage business, we have a lot of underutilized rooftops,” Burnam quips, adding, “Solar power is an important part of our energy stacks.”

Over the next five years, StorageMart anticipates 33 percent growth – increasing to 300 properties from the current 200, at a cost of several hundred million investment dollars. Burnam says, “Because of our size and unique operating strategies, we can bring value to locations that other companies haven’t been able to figure out. From a practical standpoint, two-thirds of growth will come from the U.S., as well as some in Canada, and also the U.K., but we need to gain more experience and operating knowledge before that region grows too much more.”

Succession planning is also in the works. Burnam notes, “My two brothers and my sister and I work together as part of what we call ‘G2’. The next gen, ‘G3,’ includes my nephew, three nieces, and my son, all working for the company – each having their own strengths. We have a talented group of family and non-family members. When you get to a certain size in business, you simply cannot grow without good people. That’s the real strength of StorageMart – we have great people!”

Check out this handpicked feature on Platinum Storage Group – Self-storage success is all in the family.

WHERE: Headquarters in Columbia, Missouri

Based in California, Veritec Solutions specializes in revenue management, pricing analytics, and price optimization solutions. As a consulting company and software systems provider, our assignments include diagnostic initiative as well as subscription-based and custom software. our experience across many industries has resulted in our being considered one of the world’s leading firms to help companies facing unique and nontraditional pricing opportunities. We provide complete solutions that appropriately integrate the processes, policies, systems, and metrics needed for successful implementation. 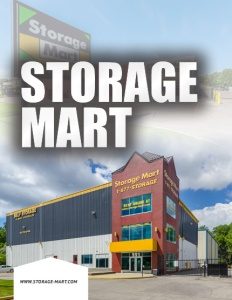