Business View Magazine interviews Brian Clemens, GM of the Dynamax Corporation as part of our series on American RV manufacturers.

The Dynamax Corporation, which operates out of a 200,000-square-foot plant on 27 acres on the north side of Elkhart, Indiana, is a manufacturer of luxury RVs and Super Class C motorhomes. The company was originally founded in 1997 by Dewayne Creighton, and was subsequently acquired by Forest River, Inc., a division of Berkshire Hathaway, in 2011.

In the competitive RV sector, Dynamax differentiates itself in several ways. “We’re different by design,” says General Manager, Brian Clemens. “We specialize in what people call a Super C. If you look at traditional Class Cs on the road, it’s going to be a van with a cab-over bed. We go steps beyond that. While we build on the E450 Ford and Mercedes Sprinter van body, we are most recognized for our models built on the Freightliner M2 commercial truck chassis. The M2 is a vehicle rated for 33,000 pounds with a gross combined weight of 55,000 pounds. It’s not your everyday, run-of-the-mill, mom and dad chassis. And what seems to be getting the most buzz is the Isata 5, which is built on the RAM 5500 truck chassis, which we offer in a 4X2 and a 4X4, with a Cummins engine. It’s been a very successful product.”

Clemens adds that Dynamax is also one of the few manufacturers that paints its own vehicles, in-house. “Most other manufacturers send them out,” he says. “We’ve got three, 60-foot, downdraft bake booths. And our paint jobs are more contemporary and cutting edge. We use automotive-inspired colors. Most RV manufacturers are traditionally neutral beiges, browns, and tans. Ours stand out for being more ‘out there,’ and a little trendier.”

Last year, the company’s 175 employees turned out just over 800 units of Class C vehicles – everything from 20 to 42 feet models priced between $120,000 and $340,000. Clemens says a lot of first-time buyers go for the 11,000-pound Sprinter because “they want to buy something a little bit better than what they traditionally see on the market. They don’t just want entry level – they want something a little nicer,” he avers. “And we get a lot of buyers who are looking for something that they feel safer in. In a Class A, you have a big windshield and you’re sitting up front. In a Class C, with a truck body, you have that engine out in front of you. It’s a more familiar feel – it’s like driving a huge SUV. So, we get people coming from Class As. Then we get retirees; we get families who want to tow something.”

Once a consumer becomes a Dynamax customer, the interaction between buyer and seller does not end. In a never-ending quest to stay ahead of the curve, Clemens reports that while it sells its vehicles through dealers, it solicits product feedback directly from the vehicles’ owners. “There’s not a single day that goes by that we’re not interacting with our customers, directly,” he maintains. “So, we have focused heavily on that. And it’s allowed us to react – we’re not waiting for model change to change product. If I can put a better product out tomorrow, we’ll make that change, instantly, because there’s no use in putting out products that we know are inferior. That quick turnaround and recovery time has allowed us to stay ahead of anyone simply reacting to what their competitors are doing. We respond based on the retail customer’s direct information.”

This past January, Clemens reports that Dynamax made a major investment in its facilities by upgrading its lamination equipment. “What we make the walls, the floor, and the roof with,” he explains. “There are only two manufacturers that build this particular product – that laminate or adhere walls using pressure. It vastly improves our efficiency in construction and the quality of the walls that we build.” He adds that one of the company’s current challenges is production capacity. “In Indiana, especially in Elkhart County, it’s not having enough manpower to feed the resurgence that we’ve seen in the RV industry.”

Nonetheless, going forward, Clemens believes that Dynamax will continue to prosper by simply continuing to produce quality Super Cs at various price points, while introducing new lines or features based on ever-changing consumer demand. “For us, it’s measured growth,” he declares. “We’re not out to become a high-volume builder. Our goal is to try and meet the demand that we have. Can we grow and maintain the quality that we’re known for? Let’s make sure that we do it at the right pace, in the right way, with the right people.”

Check out this handpicked feature on UEC Electronics is Engineering a Powerful Future.

WHO: The Dynamax Corporation

WHAT:  A manufacturer of Class C motorhomes

Toys R Us Out Of Business Due... 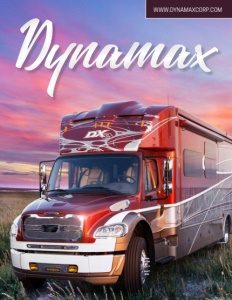