April 2018Past IssuesSupply Chain and Logistics

Business View Magazine interviews representatives of the Stark Area Regional Transit Authority, as part of our focus on best practices in transportation.

The Stark Area Regional Transit Authority (SARTA) is a public sector transit agency servicing Stark County, Ohio, which contains the cities of Canton, Alliance, and Massillon, among others. Its mission is to provide a quality transportation system with reliable services and programs to individuals, seniors, veterans, commuters, students, and the disabled, providing access to work, school, medical appointments, shopping, and more. SARTA was formerly known as the Canton Regional Transit Authority, which was established in 1971. It changed its name in 1997, when it expanded its service to include the entire county. 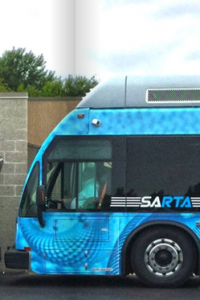 Stark Area Regional Transit Authority transports approximately 2.7 million riders a year on fixed routes, as well as its para-transit, or demand-response transportation system. It has about a hundred buses in its fleet and about 210 employees. Its annual budget is approximately $21 million, funded by a combination of a 0.25 percent dedicated county sales tax, rider fees, and state and federal grants. It is governed by a nine-member Board of Trustees who are appointed by the Stark County Council of Government, Stark County Commissioners, and the cities of Canton, Massillon, and Alliance, to three-year terms.

SARTA starts its weekday operations at 5AM, ending around 9:40 at night; evening operations continue to about 1:45 AM. A separate schedule operates on Saturdays and there is no Sunday service. In addition to its regular line service within Stark County, Stark Area Regional Transit Authority runs one bus route (with multiple times) between Canton and downtown Akron, Ohio, connecting to Akron’s METRO RTA bus system and also serving the Akron-Canton Regional Airport from both cities, and one route to Cleveland. Its administrative office and bus garage is located in Canton, and there are four transfer stations in the system: its main Cornerstone Transit Center, the Alliance Transfer Center, The Massillon Transfer Center, and the Belden Village Transfer Center.

In 2012, Stark Area Regional Transit Authority opened a public/private Compressed Natural Gas (CNG) fueling station at the company headquarters in Canton, and today, about half of its fleet runs on CNG. These vehicles are quieter, require fewer oil changes, and reduce emissions by over 80 percent when compared to traditional diesel fuel buses. In addition, SARTA saves over 40 percent a year on fuel costs for its CNG vehicles. “We also have the largest hydrogen fuel cell fleet outside of California,” adds SARTA’s President, Kirt Conrad.  “We have six on property and will have 13, by next year. They’re electric fuel cell buses that use hydrogen and have zero emissions.” In 2016, in recognition of its implementation of alternative fuel technologies, SARTA received an Honorable Mention Award for operating the Best Green Fleet in America at the Green Fleet Conference in Washington, D.C.

In addition to taking advantage of the latest in 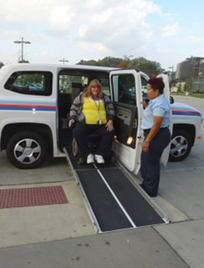 transportation technologies, Stark Area Regional Transit Authority has also applied the latest in communications technology throughout its entire system. “For fixed-route riders, we have an app called PinPoint for your phone or computer,” says IT Director, Craig Smith. “It allows you to see exactly where your bus is while you’re at a bus stop, or at home trying to plan a trip. Inside of PinPoint, all of our bus signs have a four-digit stop ID. It allows you to text the stop code to 321123 and it automatically will send you the next three times that a bus is coming to that stop. Or you can look at the map on your phone and hit your stop, and it will show you the same information. At all of our transit centers, we have real-time information signs that will know when the next bus is departing. So, we really have tried to make our system advantageous for our riders. You can also, if you have a stop near your home or a stop near your job, can set up an account where you can get alerts – a text message or an email at so many minutes before the bus is arriving at your stop. So, if you take the bus to work, and the stop is down the street, you can put that code in and it will send you a message, say ten minutes or five minutes or two minutes – however long it takes you to get to the stop – when the bus will arrive. You no longer have to stand there, waiting for the bus. You actually know when it will be there.”

Stark Area Regional Transit Authority’s employment of the latest technologies in the transportation sector extends to its para-transit service for persons with disabilities who are unable to use the fixed-route system. “What we tried to do through the use of technology and scheduling software is to continually optimize our schedules,” explains Nick Davidson, Transportation Planning Manager. “Prior to this shift, drivers would have a piece of paper that had their entire schedule for the day, on it – all their pickups and drop-offs. We’ve moved to dynamic scheduling. We have mobile data terminals (MDTs) on all of our buses, now, to communicate to them through the network, so we can actually push the driver’s manifest directly to their interface on the bus. If we receive cancellations or additional trips, we can optimize trips around. We’ve seen a dramatic increase in on-time performance, a decrease in onboard time, and a decrease in miles, which all contribute to cost savings.”

“As part of that we have our IVR system – our interactive voice response,” adds Smith. “We actually provide reminder calls, much like if you were to go to the doctor or dentist and receive a reminder call the night before. We provide that and we also provide schedule arrival calls; we’ll call you roughly 15 minutes before, saying your bus will be arriving shortly and if you need to cancel, there’ll be an option to cancel that trip. You can schedule online, on the phone, or you can speak with a live reservationist. We try to use technology to enhance and maximize the experience our customers have.”

Regardless of these innovations, Conrad recognizes that the most important task of Stark Area Regional Transit Authority is simply to get people moving in the most efficient way possible, for their own purposes. “You need to understand what people are using your system for in order to build that transportation system. Instead of looking at a road or the infrastructure, we’re looking at the individual’s mobility needs,” he relates. “One of the things we’re seeing here in our community is a shift in population from the city of Canton to the outlying areas. So, we’re having to respond to those changes. And some of our routes run hourly or on a two-hour basis and it’s hard to plan your day around that. Most planning efforts try to get their mainline routes down to about 30 minutes, so that’s one thing we’d like to do – increase our route frequency and then try to get some of our routes started earlier in the morning. We try to build our system around the motivators in riding transit: information, safety, and dependability. Everything we do works around these motivators. You have to build service around the mobility needs of your community and region – or no one is going to ride.”

Check out this handpicked feature on Holiday Tours – Taking care of everything.

WHAT:  A public sector transit agency 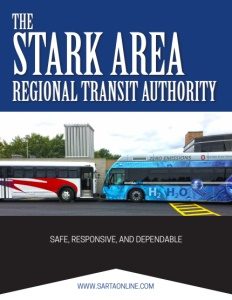