Taking care of everything

Holiday Tours, a family-owned and operated motor coach company in Randleman, North Carolina, was founded in1978, by Nancy and Dwight Thompson. “It was an accident, to be honest,” says Jonathan Moody, General Manager of the company founded by his grandmother almost 40 years ago. “She went on a bus tour to Pigeon Forge, Tennessee, and fell in love with the idea of 40-plus people, who didn’t know each other, going together on vacation to somewhere they had never been. This idea of going into the mountains of Tennessee with 40 people you didn’t know felt comfortable, but also felt exciting.”

“So, as soon as she got back,” Moody continues, “she made the phone call to the coach company and asked, ‘How do I do this? What do I have to do to get my own bus together?’ They said, ‘If you get us 20 people, you get to go for free.’ And, when they said the word ‘free,’ she was hooked. She hung up the phone with them and immediately pulled out the phone book and started calling every local number she could, saying, ‘I’m doing this trip to Tennessee. Would you like to go with me?’ She filled a bus and they went. And that’s how it started.”

Nancy soon realized that she needed someone to manage operations while she was on the road, so she tapped her daughter, Rhonda, who was in college, at the time. “My mom stepped in and became the first reservation agent that we had,” says Moody. “She was in the office every day taking phone calls, taking reservations, and making sure that when Nancy returned from a tour, there was another sold-out tour ready to go right back out.”

For the next year or so, Nancy acted as a tour operator, growing a group of people who wanted to travel with her wherever she went. “Then the situation turned,” Moody recounts. “What happened was, people started calling the bus company, asking for Nancy’s tours. And instead of being excited that the company had a tour operator that was growing their business, they got a little jealous. So, they started sending her equipment that had failures, equipment that was missing seats, equipment that wasn’t working properly, or didn’t have AC in the middle of summer. 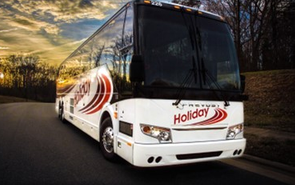 “The straw that broke the camel’s back came when she was scheduling a cruise out of Miami and they sent her a bus that was missing two rows of seats. When the bus arrived, her bus driver, said, ‘If you can find some wood, we’ll plank some seats together.’ And they had four people ride on a two by ten all the way to Miami, Florida. Once that tour returned, Nancy said she was done. She put her house up as collateral and bought her first bus – a used Trailways bus to operate her own tours. The bus driver, who had driven all of her tours, told her, ‘If you can buy a bus, I’ll drive it.’ He came on board with her and that’s how Holiday Tours really got started.”

“Today, we’re still operating tours like we did in 1978,” Moody states. “The difference is we’ve got 70 buses and our primary business isn’t tours, anymore. The tours are still a part of what we do, but what we found over the last fifteen to twenty years, is that the charter side of business could ramp and scale up a lot quicker than the tour side could. The difference is it takes 30 to 40 individuals calling in to book a bus tour; it takes one person on the charter side of the business to book four buses for their band to go to a competition, or one person to book 20 buses for the military to move troops from Ft. Bragg to Quantico, or one person to book ten buses for a football game with cheerleaders and a band going to the state playoffs.”

Moody says that the company will have 74 buses in the fleet by January. All of Holiday Tours’ coaches are equipped with DVD players, a PA system, reclining seats, and a restroom. Added amenities can include WiFI, electrical outlets, satellite TV, and a presenter system that allows the passengers to control the TV monitors, or audio, via tablet or computer. “We also have ADA buses available to meet passengers’ needs,” he adds. “And we go just about anywhere and everywhere. In 2016, we actually travelled 3.6 million miles up and down the east coast, as far west as California, and as far north as Nova Scotia and beyond. We also estimate about 14 to 16 thousand passenger-days on the road with us.”

Moody believes there are several factors that differentiate Holiday Tours from the competition: “Number one is branding,” he declares. “We make sure that all of our buses display our name proudly and boldly, making it a recognizable vehicle as it’s driving down the road. A lot of other bus companies do not, or they have no name on the vehicle. We’ve always said that if they’re not proud of their name, there’s a reason.

“The other is customer service and 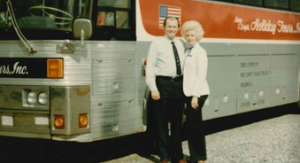 treating everybody like family. Time and time again, I hear somebody say, ‘So and so just booked a bus with us because we were the only one who called back to see if they wanted to book it or if they had any questions.’ It seems like that customer service aspect in the marketplace is not as prominent as it once was and we’re doing our best to maintain and hold fast to those values.

“Another thing that separates us from our competitors is the consistency of our vehicles. Since the mid- ‘80s, we have purchased one type and manufacturer of vehicles, which is a Prevost bus. They are a luxury bus line company under the Volvo name. And, for the past 20 or 30 years, we’ve been buying these Prevost h3-45s. We’ve got 60 of them. So, our mechanics only have to work on one or two styles of vehicle. They’re looking at the same type of vehicle day in and day out, which gives them a more focused knowledge base and a narrower field of things they have to know in order to fix a bus.”

Moody reports that Holiday Tour buses are maintained for up to 20 years. “And we do several renovations on the bus during that time to make sure it stays up to our standards,” he says. “And that’s really the thing. You take a bus, maintain it, clean it every single time it goes out on the road, and maintain it with pride. I have people who get on a bus of mine that’s 10 to 15 years old, and they’re talking about how new it looks in comparison to a competitor that doesn’t do those things, like waxing the outside of the vehicle every six months to maintain that gloss, or doesn’t switch out seats every few years to make sure the fabric still smells new. We’ve got buses that we could park beside some of our competitors that are only a couple of years old, and you would still think that ours is a newer vehicle.”

What actually is new in the motor coach market, Moody explains, is a recent federal mandate requiring the installation of an ELD, an electronic logging device, on every single vehicle in the fleet. “Instead of the drivers recording on paper what they do each day, the miles, the hours, how long each trip took, it is all going to be digitized and linked with the GPS tracking unit on the vehicle. So, if a customer ever questions where a bus is at, or what time it will arrive, we’ll have better details to answer the questions, as well as to respond if there ever is an issue on the road. We do every step in preventative maintenance that we can to make sure they keep rolling, but hearts just fail, occasionally. So, when that happens, and we do have a situation on the road, by that electronic logging device, we will actually know it as it’s occurring, rather than waiting on the driver to call us and alert us of the issue.”

In addition, when responding to on-road issues, Moody says the company also relies on its partnerships with other motor coach companies, via its participation in the UMA (United Motorcoach Association), the ABA (American Bus Association), the North Carolina Motor Coach Association, as well as other groups. “So, if we’re in the middle of nowhere, I don’t have to look for a bus company to help. I know exactly who to call and I know what their number is.”

Moody reveals that he is frustrated with the growth of sham, or third-party companies, that don’t actually own their own vehicles, but advertise themselves as booking operators. “You call them for a quote, they quote you a price, and they will find the absolute cheapest vehicle, regardless of safety, regardless of any factors that you would use to choose which company in whose hands you’re going to put your life. We’re constantly battling with these companies that don’t own or operate any buses. They’re just looking to make a dollar any way they can.

“We have retained the focus on being the best at customer service,” Moody says, in comparison. “We have 160-plus, full-time and part-time drivers who treat their groups the best they can. We have 20 to 30 people in our mechanic and cleaning teams that keep the vehicles maintained. We also have a ten-member operations team that directly handles the details for the drivers. And we’re going to maintain a focus on safety to make sure that when you’re out with us, you don’t have to worry about the vehicle or the details or the driving. You can sit back and relax, and we’ll take care of everything.”

Check out this handpicked feature on The Alexandria Transit Company – Welcome aboard.

WHAT: A family-owned and operated motor coach company 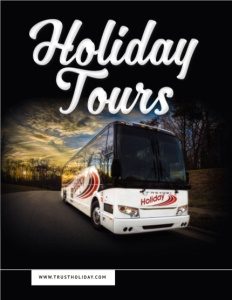