Green Relief – A difference maker in the industry

A difference maker in the industry

Business View Magazine interviews Steve LeBlanc of Green Relief, as part of our focus on best practices of Canadian businesses.

Based in Hamilton, Ontario, Green Relief is a licensed producer (LP) of dried cannabis and extracted cannabis oils, under Health Canada’s Access to Cannabis for Medical Purposes Regulations. The company was founded by Warren Bravo, Lyn Bravo, and Steve LeBlanc in 2013, with the mission to help patients improve the quality of their lives, while furthering the science of medical cannabis research, and the sustainable growth of marijuana and other agricultural crops. 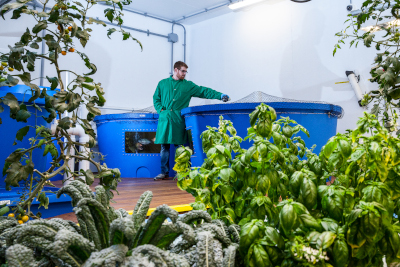 Unlike many cannabis cultivators, today, LeBlanc says that from the beginning, the partners knew they wanted to produce their crops via aquaponics – a system of aquaculture in which waste produced by farmed fish or other aquatic animals supplies nutrients for plants grown hydroponically, which, in turn, purify the water. In combining both hydroponic and aquaculture systems, aquaponics capitalizes on their benefits and eliminates the drawbacks of each.

“Aquaponics is the most sustainable form of agriculture known; it’s been around for quite a long time,” says LeBlanc. “We liked the sustainable agriculture aspect of it; also the no cost for fertilizers was very attractive. So we did a beta test and tested a small system. When we saw the results, and knowing that we weren’t in a really well-controlled environment, and could do a lot better, we thought this was the way we were going to go. We started doing a ton of research on what would be the best facility for a controlled environment. We toured, roughly, 70 different grows, right across North America, and wanted to find out from the growers, themselves, what their biggest issues were. Then we took that information and sat down with our engineers and said, ‘This is what we have to construct.’ So, we designed a state-of-the-art, earth-sheltered building – basically a concrete bunker – with incredible HVAC components, and we built what is known as Green Relief, today.”

“In our system, everything is 100 percent controlled,” Le Blanc continues. “We created an ecosystem that is virtually the same as what you’d see in a pond, where you see lily pads, bulrushes – it’s all being fed by the aquaculture within that pond. The fish are in a tank, they poop and they pee in the tank –nitrifying bacteria convert the ammonia and the nitrites from the waste into usable plant food – nitrates for the plants. The plants then clean the water which comes back into the fish tanks, perfectly clean. We’ve just taken that and scaled it and scientifically balanced it so we’re getting the exact amount of nutrients our plants need on a day-to-day basis, and as the water flows through those beds, it’s cleaned by the plants and then flows right back into our aquaponics tanks, and the entire cycle starts over again. 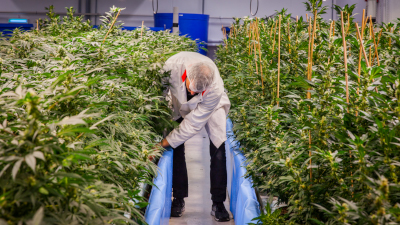 “Every day is the same day within our grow rooms, no matter what the weather is outside. We have 40 air changes an hour which eliminates a lot of mold and mildew issues, which a lot of other licensed producers are having on indoor grows. There are a lot of byproducts with this type of system that we didn’t realize we were going to achieve. One: because it’s a completely organic system – there are no additives into the system, except for the fish food, which is organic.

“Two: Our product has a customer acceptance second to none. The product is clean, it’s smooth, and it doesn’t have a lot of mineral salt buildups, or nitrate buildups within the product. Even if you’re growing in a field, and you’re growing organically, it’s almost impossible to achieve organic status due to the fact that you have so many environmental conditions that play in the system: runoff from other properties, acid rain, etc.; there are a lot of things that play into trying to achieve an organic product.

“Three: We did a comparison on square footage growth on what we can grow in one square foot and compared that to a friend of ours who is growing cannabis on a 65-acre field in Seattle. Our yield on two acres of aquaponics equals what he can grow on his 65-acre field, and we use one tenth the amount of water.”

Today, Green Relief sells only to patients with valid, medical prescriptions, and approximately 60 percent of its product is cannabis oil extract, “because we’re selling to medical patients, and most of them don’t want to smoke product; they want to consume it for its medical benefits,” LeBlanc explains. But the landscape in Canada is about to change significantly this coming October, when recreational marijuana becomes legal, countrywide. And Green Relief is getting ready, constructing a 240,000-square-foot expansion next door to its existing facility.

“The market will explode,” LeBlanc declares. “Right now, all the producers in Canada cannot produce enough product to, theoretically, supply the recreation market. There have been a lot of licensed producers that have been stockpiling product for this legalization, so there’s going to be enough product to start. We think there will be a shortfall, moving forward, but most of the licensed producers are already involved in expansions and we should be able to take up the slack. I’ve got another facility in Grimsby that we’re building out, and we just bought another 100,000-square-foot building that will be operational within four months to produce another 50,000 pounds per year. We’re not the only ones going through an expansion phase to accommodate that market.” 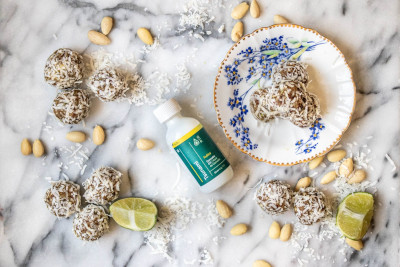 “But the lowest-cost producer, producing the best product, is going to be the producer that remains standing when it’s all said and done,” he adds. “And right now, we boast some of the lowest production costs of any LP in Canada. We have no cost for fertilizers; we run a hundred percent LED lighting throughout all of our facilities; we’re consuming 35 to 45 percent less power than our competitors; and it’s done using one tenth the amount of water. We’re also moving towards some other green initiatives that will lower our power costs, moving forward. We will be one of the lowest-cost producers in Canada, bar none, and producing the best organic product there is. We will be one of those dominating the industry.”

While LeBlanc expects to make a lot of money in the recreational market, he insists that Green Relief will use some of those profits to continue to fund its research in the medical and scientific fields. “We’re doing some stuff regarding our oil separations,” he notes. “We want to create specific medicines for specific ailments. Also, we want to be able to supply under a GMP protocol to pharmaceutical companies because they are going to be jumping into this game soon, for sure. And when that happens, we want to be the one that they come to because that product going to pharmaceutical companies will be sold at an extremely high rate because it’s GMP-certified. (GMP, which stands for Good Manufacturing Practice, is a system for ensuring that products are consistently produced and controlled according to quality standards.) “It’s a very hard certificate to achieve. The protocols are extraordinarily high, but it allows us to sell our products at a significantly higher number, because with that comes a significantly higher cost. So, we’re going to be playing in that.”

“We do see a lot of changes coming in the industry,” LeBlanc concludes. “How it ends up, we’re not a hundred percent sure. But, we do have a constant line of communication with Health Canada and the aspects of what they’re doing, moving forward. And the system that we’re using – we own the cannabis rights for North America, so it would be very hard for people to duplicate what we’re doing. The bottom line is we’re doing it green, it’s cost-effective, it’s better than organic, and we’re growing it cheaper than all our competitors. When you put all of that together, that makes me a difference maker in the industry.”

Check out this handpicked feature on GNC – Around the World in (almost) 80 Years.

The Ausabis Group, soon to be known as the Cannenta Clinic, is invested in the ongoing development of Medical Cannabis products available to patients, globally. It backs research into further developing these products for its patients and health professionals. Ausabis Group works with medical professionals, including doctors, nurse practitioners, and pharmaceutical representatives in order to educate the Medical Cannabis public to ensure safe and effective methods of prescription are conducted when administrating the Medical Cannabis globally. Its commitment to its patients goes beyond securing them a medical cannabis supplier but also extends to providing cannabis education and consumption guidance. This includes alerting patients as to whether they already qualify for medical cannabis coverage under their current health plans. 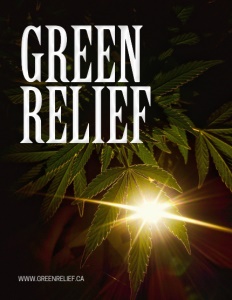