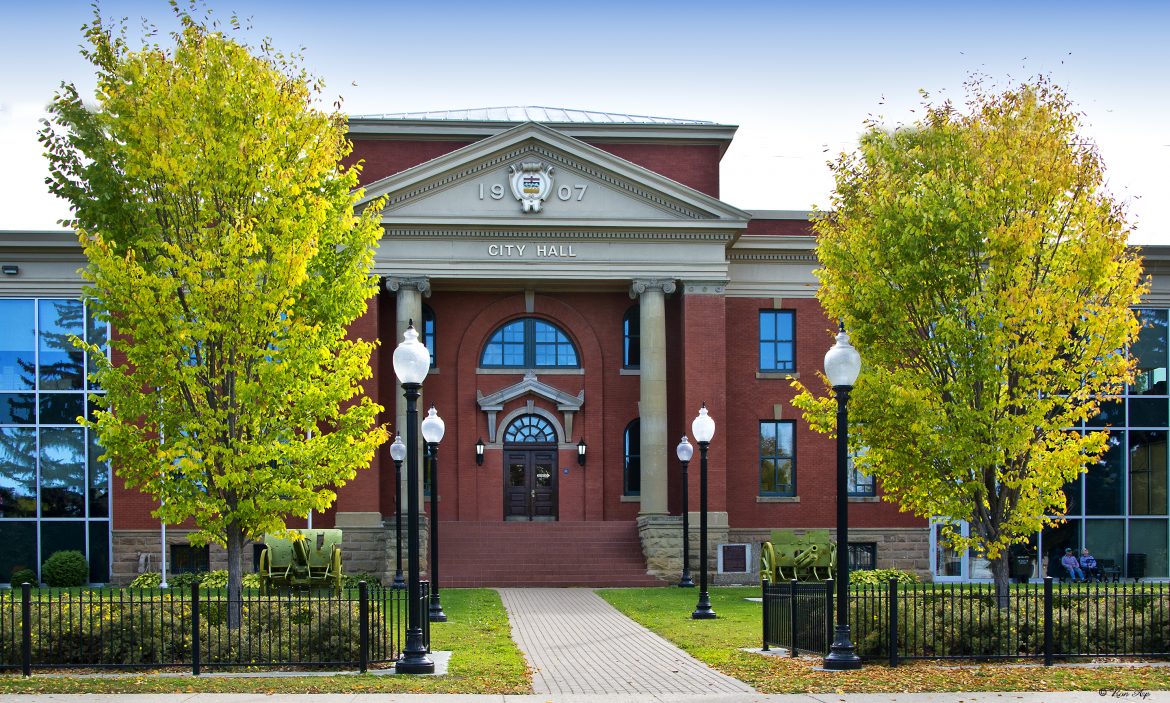 Hundreds of years before settlers arrived, the land now known as the City of Wetaskiwin was home to the Plains Cree peoples. Legend has it, the peace pipe was smoked ‘accidentally’ there, by two young Chiefs whose tribes were at war. The name “Wetaskiwin” is Cree for “the hills where peace was made.” Indeed, the community today is a peaceful, welcoming haven in the midst of western Canada.

Founded in 1892, Wetaskiwin is one of Alberta’s oldest cities. The community grew quickly to become a town in 1902 and a city in 1906. While treasuring its past through restoration of historic landmarks and development of its museums, the city has a keen focus on progressive growth and sustainability.

Dave Burgess relocated in 2016 from Manitoba to take on the role of Wetaskiwin City Manager, and since then has been heavily involved in addressing improvements to efficiencies, and developing a strategic master plan, going forward. His affable manner highlights his pleasure with the job and the city he’s come to adore. He jokes, “I came here a year and a half ago and, I tell you, the first six months were a busy three years.”

Many impressive initiatives have taken place on the green sustainability front. Wetaskiwin’s new City Hall, a former provincial courthouse built in 1907, was renovated in 2005 with a geothermal energy system for heating and cooling. The Drill Hall building is powered by 108 solar photovoltaic (PV) panels from NuEnergy, a leading Alberta supplier of renewable energy products. Excess energy is fed back into the grid. An additional 30 solar panels on the Manluk Aquatic Centre help heat the training pool. All city street lights are LED, city council activities are paperless, there is an electric vehicle charging station, and fiber optic cable is available to 90 percent of homes and businesses.

A three-component Environmental Sustainability Program promotes development while encouraging environmental stewardship. The program includes a Low Flow Toilet Rebate; a Solar Panel Rebate; and a Green Building Rebate that offers builders or homeowners who build to a Built Green, R2000, or LEED standard a full rebate of the development fee.

Burgess notes, “We’ve got a very interesting recycling program. Our diversion rate from the landfill is sitting at 60 percent, and, if you can believe it, that’s with no curbside service. We have a convenient drive-through distribution center that’s second to none. When I first came here, I was shocked, then when I saw how successful it was, it’s almost like you don’t want to foul that up by changing where we’re at. It’s amazing how well the public have bought into this. We’re still exploring ways to increase recycling even more. But we have a very superior drop-off depot that’s so well utilized we don’t want to mess that up. Residents can drop off at any time. Staff is on hand, and bins are well marked for separating. Best of all – no separation costs associated with curbside pickup.”

Wetaskiwin investment in infrastructure upgrades, as part of the ambitious Main Street Revitalization Project, includes a roundabout and Jubilee Park, with an amphitheatre for community events. There is also a state-of-the-art recreation facility, the Manluk Centre: Wetaskiwin Regional Aquatics and Fitness, and the Regional Fire Training Facility. The City Hall revamp was beautifully done to respect its heritage, while adding functionality to the whole building. Original jail cells in the basement are popular with visitors who come through on sightseeing tours. Even the old caretaker’s suite has been kept as a mini-museum.

Burgess adds, “City Hall is on our main street, 50th Avenue. Just to the west is downtown, where restored historic buildings and hand-painted murals portray the city’s past. One block east are our arenas and recreational facility, with a phenomenal indoor pool. So, we have new and old. We’re on the last phase of the four-part main street rebuild. Our downtown has been refurbished nicely, as far as aesthetics and functionality; reconfiguring of the roadway is working well to slow people down through the core. Four new retail businesses opened downtown in the last five weeks, and more are coming. And City Council is supporting our plan to have a business incubator set up in the downtown area, not only to fill vacant space, but to encourage others to expand their businesses as they grow.”

Walkability and bikeability are today’s buzz words, yet, something Wetaskiwin has focused on for years. Burgess relates, “We have a tremendous amount of paved walking paths. A gem of our city is By the Lake Park that has walkways around the lake and through the bush. It’s a 2.2 km path that’s easily accessible from downtown on walkways leading to that park.”

The city’s population hovers around 13,000. Many residents commute to jobs in Edmonton, Sherwood Park, Leduc – while other people travel into Wetaskiwin to work. Burgess shares, “One of the nicer parts of moving here was having a three-minute commute to work, but also having the Edmonton International Airport nearby, just north of Leduc. We’re actually closer to the airport than many people who live in Edmonton.”

One of the city’s largest employers is the Wetaskiwin Hospital and Care Centre – an 83-bed facility with a plethora of amenities, including dialysis treatments, and a STARS helipad for emergency service.

Existing manufacturing businesses have expanded in Wetaskiwin’s industrial parks, and the city has also expanded its offering of industrial land. Land costs are about fifty percent less per acre than areas closer to Edmonton (a 45 minutes’ drive away) or the airport, Wetaskiwin doesn’t charge tax on business equipment or machinery, and has no offset levees for industries moving to town. Burgess says, “That gives us a great competitive edge. Lands are all serviced and ready to go. We just finished an annexation, last year, for another industrial park. And we have a lot of land within the city that can be developed for residential, as well.”

Transportation-wise, a very active CP Rail freight line runs directly through the city. And Highway 2, the second busiest highway in Canada, is only 9 miles away. Running between Calgary and Edmonton, it’s a beneficial supply line connecting Wetaskiwin to major centres and services, as well as bringing tourists into the city to visit the renowned Reynolds Alberta Museum. The museum houses antique aircraft, automobiles, equipment, motorcycles, and recently received approval from the province for a $40 million expansion. Just ‘over the field’, the Canadian Aviation Hall of Fame draws people from across Canada and beyond.

Burgess shares, “We have the Home Hardware Distribution Centre for western Canada located here because of the access for transportation. Also, we’re at the centre point for the western reaches of the country and, of course, the Vancouver area. As far as long-term businesses go, one of the longest standing companies here is AC Dandy Products Ltd. – a supplier of electrical components and systems right across North America. Also, Manluk Global Manufacturing Solutions ships internationally and has been a major employer here for many years. They sponsored our fabulous community recreation facility. We do have a very generous business sector.”

Wetaskiwin has new master plans in the works for industrial and residential development, as well as downtown expansion/enhancement. However, a municipal election, less than three months away, could determine the course taken with those strategic plans.

Burgess stresses the affordability of the city as a place to live and conduct business. “We have a survey done by another city, where we are almost tied with the lowest affordable city in Alberta, as far as combined costs of housing, taxation, and utilities. We had a slight reduction in taxes last year and are looking at holding the line this year. The cost of housing is probably the biggest contributor – ours is quite low compared to most centres.”

Wetaskiwin is a very progressive city that cares equally about providing excellent quality of life for its community. Walkability is a strong component. Environmental responsibility is at the forefront. Burgess sums it up, “There are many steps you can take that make sense financially, but environmentally you’re paid off as well. Infrastructure improvements to roadways, water systems, etc. are part of our ten-year master plan. We’re preparing for growth, and attraction of businesses; we have the infrastructure set up for industrial and residential expansion. How we see that going over the next ten years depends on the success over the next five.”

NorQuest College- Wetaskiwin Campus – Founded 50 years ago, NorQuest College serves approximately 15,850 full-time, part-time, and continuing education students each year, 60 percent of whom are born outside of Canada. As a regional steward, the school also provides access to adult education in Edmonton and the surrounding region. – www.norquest.ca 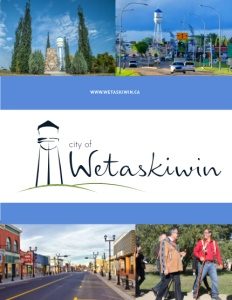