Business View Magazine interviews representatives from Russell County, Kentucky, as part of our focus on best practices of town, cities, and counties.

Russell County, Kentucky is located in the south central portion of the Bluegrass State, with a population of approximately, 17,800. Its two major cities are Jamestown, the county seat, founded in 1825, and Russell Springs, which was incorporated in 1936. Russell County is known as the Gateway to Lake Cumberland, one of the largest man-made lakes east of the Mississippi, created by the impoundment of the Cumberland River by Wolf Creek Dam by the U.S Army Corps of Engineers in 1952.

Lake Cumberland is of great economic importance to Russell County and its tourism industry. Each year, millions of visitors enjoy recreational fishing and boating along its 1,317 miles of shoreline and five major marinas, while pumping $57 million into the local coffers. Also important to the County’s economy is the Wolf Creek National Fish Hatchery. Constructed in 1975, the Hatchery produces approximately one million brown, brook, cutthroat, and rainbow trout, annually, which are then stocked into over 100 different public fishing waters in Kentucky and Indiana. 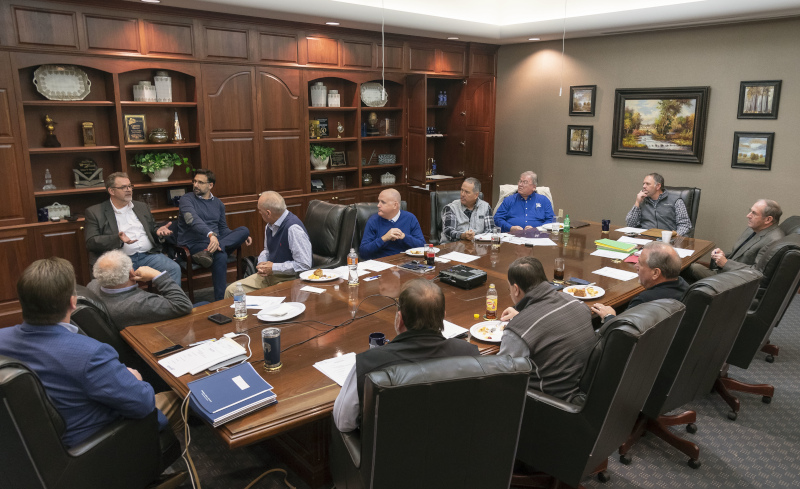 Gary D. Robertson, Russell County’s Judge/Executive, adds that Russell County is also home to a thriving manufacturing sector. “We’ve got seven different manufacturing industries here in the County,” he notes, “with 1,700 jobs.”  Bennie Garland, Executive Director of the Russell County Industrial Development Authority (RCIDA) adds, “We’ve got two automotive manufacturing plants: Bruss North America and Dr. Schneider Automotive Systems, which are German companies. We have Superior Battery, which manufactures batteries and distributes them to 26 countries around the world. And we’ve got the largest manufacturer of fencing in the United States, Stephens Pipe & Steel. So, we’re diversified in our economy, which is a tremendous thing because several years ago, the textile industry in our region was the dominant sector and we lost 10,000 textile jobs over a period of five years. Russell County lost 3,000 jobs, alone. So, Russell County now, is not putting all its eggs in one basket.”

And Russell County is always on the lookout for more industrial newcomers. Its Lake Cumberland Regional Industrial Complex, supported by the RCIDA, contains over 100 acres of available property in a Federal Opportunity Zone, a 43,750-sq.-ft. spec building, and a 150,000-sq.-ft. build-ready pad. In touting the County’s many advantages, Garland adds that, “We are in the position here of having the only certified, shovel-ready food and beverage industrial site in the State of Kentucky, due to the Cities of Jamestown and Russell Springs having an unlimited supply of water and wastewater capacity.”

Nicholas Shearer, the mayor of Jamestown, elaborates on the water situation: “The City is in the process of replacing its 70-year-old water and sewer lines and upgrading its state-of-the-art water treatment plant. That will give us even better water quality; it will be better than the bottled water in the stores, and it will provide the higher capacity of water that our region needs. And the City of Jamestown’s wastewater treatment plant became green about three years ago. We treat our wastewater with peracetic acid, which is more environmentally-friendly dilution to treat wastewater. We’re growing by leaps and bounds. In the northern end of the County, we’ve had almost 60 percent more water taps and sewer taps in that area. In south Russell County, we have almost 65 percent more water taps and sewer taps. When we do a water or sewer tap, that means we’re growing in residential properties.”

According to Garland, some of that growth can be attributed to new retirees moving into communities near Lake Cumberland, after having visited the region as tourists over the years. “So, our tax base has increased from that aspect,” he notes. “We do have a dire need for more construction of single family residential housing, though. The existing contractors in our area are about two or three years ahead of schedule right now and cannot take on any more demand at this time. And when you look at the population projections for Russell County, it is projected to increase dramatically over the years.” 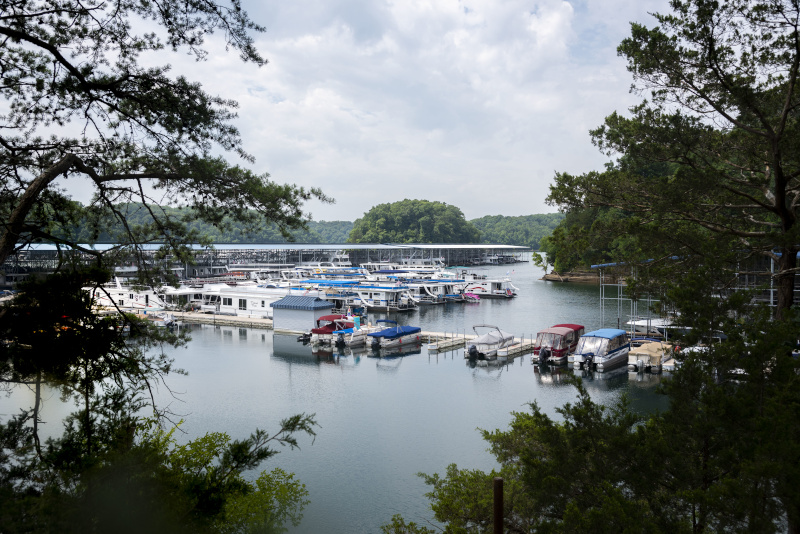 One way in which the County hopes to meet the need for new housing is to develop the next generation of tradesmen and builders, locally. It’s one of the aims of the new Lake Cumberland Regional College & Workforce Center, now under construction on the grounds of Russell County High School. When complete, the Center will be a resource for the entire region in all five primary Kentucky Workforce Investment Board sectors: advanced manufacturing, healthcare, technology, transportation, and the construction trades. “We’re hoping that this new vocational center will help us develop more carpenters, more welders, and more electricians that will ease up that dire need,” says Shearer.

“We were able, with the Board of Education, to get a $5.6 million workforce initiative grant, matched with industrial revenue bond funds, to build the regional high school/technical/vocation school, which will teach the new state-of-the-art technologies that kids need today in order to enter into the labor force,” Garland adds. “And we’re hoping to initiate a new agribusiness training facility in this location, which will teach hydroponics. We’re agriculture-oriented in our region, so this will give an opportunity for our young people to be on top with skills to enter the agribusiness community, as well.”

Already in place within Russell County are several other advantages that make it an ideal place for new business and residents. In 2015, the cities of Jamestown and Russell Springs became two of the first gigabit Internet communities in Kentucky with the completion of a state-of-the-art, optical fiber network by the local telephone cooperative, Duo County Telephone.  “We’ve got about 65 percent coverage,” says Robertson. “We’re way ahead of a lot of the neighboring counties on that.” Today, the cooperative is a full-service communications company, providing state-of-the-art, quality telephone service over computerized digital switching offices and fiber optic transmission facilities. It also provides high-speed internet service and high-quality digital video services over both a coax and telephone network. The cooperative provides wireless telephone/data services, as well, through a regional partnership, doing business as Bluegrass Cellular Inc.

In addition, a brand new library opened in Jamestown last November. “We were very fortunate to obtain a grant from the state to pay about $120,000 a year toward the debt service on that over a 20-year period,” says Garland. “So, it’s essentially going to take care of about half the cost of that library. It’s a state-of-the-art library and we’re very proud of it.” Russell County also is home to the Russell County Airport, a general aviation facility with a 5010 X 78 foot, asphalt runway, 24-hour fuel service, and available hangar space, tie-downs, and repair facilities.

Shearer notes that Jamestown has been designated as one of only nine “Trail Towns” in the state. The Kentucky Trail Town Program is designed to help connect communities to trail systems and develop them as tourist destinations, while guiding travelers to trails, food, lodging, campgrounds, museums, entertainment, and other services. “We got that designation about five years ago,” he recounts. “We are connected and developed for biking, hiking, and kayaking.”

Eddie Thomas, the mayor of Russell Springs, touts that city’s efforts to revitalize its downtown. It has seen the opening of several new businesses, and it is getting ready to build a new police station as well as a new ABC building for the administration of liquor sales within the city limits. For almost a century, Russell County has been “dry,” meaning that alcohol was prohibited. But in a referendum in 2016, the county voted to go “wet.” “We should break ground on it within months,” he reports.

This past February, Russell Springs invited HGTV to come and be part of the change already happening on downtown, and applied for inclusion in the network’s Home Town Takeover series, wherein Home Town hosts, Ben and Erin Napier, take on the task of revitalizing not just individual homes, but an entire downtown. It submitted an application video – one of a half-million photo and video submissions representing more than 2,600 towns across the U.S. – highlighting several inhabitants of Main Street, including the Star Theater and Xtreme Detailing Auto Spa. Unfortunately, the winner just chosen for a takeover was not Russell Springs, but Wetumpka, Alabama.

Thomas remains undaunted. “In five years, I hope to see Russell Springs’ downtown revived and moving forward,” he enthuses. “When you’re looking to move somewhere, you look at parks, hospitals – ours is growing – and the school system. I think we’ve got the best of all of them. Infrastructure: we’ve got grants in for sewer lines. They’ve been in since the ‘40s and 50s, and we want to replace them. If Russell Springs grows, Russell County grows. So we’re committed to make it better.”

“I hope to have not only expanded our water and sewer, but have a big industrial manufacturer that will use our high water capacity, i.e. a food and beverage site,” says Shearer, musing about the next several years in Jamestown’s future. “I hope to grow our infrastructure to second-to-none. Also, I want to grow our quality of life. There’s nothing I want to do more than to tell my kids they can come back and get a good job here in our community. Our focus should be a better today for a brighter future.  Our future is our children.”

Garland is bullish on the future, as well, but points out some, as yet, unmeet needs in Russell County as it looks to develop its potential. “One of the things that we’ve found in both cities: we do have a dire need, now, for more modern lodging and dining facilities in Russell County,” he states. “People that come into Russell County are spending the night in other counties. We need A Holiday Inn Express or a Hampton Inn here. We need an Appleby’s or an Outback. That will stabilize our economy more and I think it would enhance the quality of life for the citizens. In any case, we’ve had, in the last two years, several companies looking to relocate here, and I feel fairly confident that in the next five years, we’re going to have more attractive industries here. So, we’re very excited about things that are going on in Russell County; it’s a great place to live, a great place to play, and a great place to work.”

State Dock Marina is located in the heart of Kentucky. Nestled along the 1200 miles of shoreline on Lake Cumberland, the houseboat capital of the world. Astounding waterfalls and countless secret coves awaiting you. Spend your vacation cruising, skiing, fishing, or onboard a custom houseboat from State Dock.