Schaumburg, Illinois – The good life in the golden corridor

The good life in the golden corridor

Schaumburg, Illinois, is a village in the northeastern part of the state, approximately 28 miles northwest of Chicago. Once inhabited by Native American tribes including the Sauk, Fox, Potawatomi, and Kickapoo, by the late 19th century, Schaumburg had become a small farming community settled by some “Yankee” settlers from the eastern United States, but mostly by immigrants from Germany. In fact, until the 1950s, German was the first language of the majority of its households. The Village incorporated in 1956, at a time when Schaumburg was just beginning to transform itself from a rural community into a thriving residential and business suburb.

Between 1970 and 1990, Schaumburg, Illinois’s population grew from 18,700 to 68,500. Its close proximity to O’Hare International Airport and area expressways helped fuel its rapid growth, as more and more farm fields were being turned into residential subdivisions, office parks, and manufacturing plants. According to Matt Frank, Schaumburg’s Economic Development Manager, today, the town of 75,000 is “the second largest economic generator in the State of Illinois, behind Chicago, because of the amount of business and retail sales and hospitality. We’re a community that was planned for business and corporate growth and we’ve lived up to that over the past 60 years,” he said.

In fact, Schaumburg, Illinois is one of the many villages and towns of Chicago’s northwest suburbs that is considered part of the “Golden Corridor” – so named for the Fortune 500 company headquarters, office and industrial parks, exhibition and entertainment centers, medical facilities, hotels, shopping centers, and restaurants located along its length; all generating a “gold” mine of economic profit for the various communities within its sphere of influence.

Frank notes that Schaumburg, Illinois is the world headquarters of Motorola Solutions and recently added Sunstar Americas this past year. “We’re heavy into financial and insurance services,” he says. “Zurich Insurance has their Midwest headquarters here in Schaumburg, and they’re building a brand new facility – over a $300 million investment. Roughly 700,000 square feet of new office space is going to open up in September and they will be relocating 2,200 employees into this brand new facility. GE Capital has a large presence here. We’ve got Verizon Wireless, A.C. Nielsen, IBM, and Comcast,” he adds.

According to Frank, within the Village’s 20 square miles, there are: 13 million square feet of manufacturing space, 12 million square feet of office, and roughly 9 million square feet of retail. “Woodfield Mall, one of the largest malls in the U.S. opened in 1971 and just underwent a major renovation,” he says. “It attracts 27 million people a year. So it’s an incredible economic generator for us.” Schaumburg, Illinois is also home to 26 hotels, with four more under construction, and over 200 restaurants. These enterprises serve more than 100,000 business travelers who attend 100 plus events per year at the Village’s state-of-the-art convention center—the Renaissance Schaumburg Convention Center and Hotel—which boasts 100,000 square feet of exhibition space.
Also helping to market Schaumburg, Illinois as a place to do business, is its local Chamber of Commerce, the Schaumburg Business Association – a 650-member organization that partners with the Village to coordinate and promote events. “They host four manufacturing summits a year; they host two commercial real estate summits, plus a variety of other events and programs,” Frank says. “We have a great relationship with them and they have a broad reach throughout the Chicago land area. That’s a benefit to a local municipality – that strong tie into the business community.”
And yet, it is one thing to create business success – and another thing, altogether, to sustain it – which is why the Village of Schaumburg, in cooperation with the nearby Village of Hoffman Estates, established the Golden Corridor Advanced Manufacturing Partnership (GCAMP) in 2009. “We had been out making visits to our local manufacturers,” Frank relates, “and talking to them about what their issues are, and how the Village can help. And the resounding answer was, ‘workforce shortage.’ All their employees were close to retirement age, and they couldn’t get young people engaged or excited about the careers in manufacturing.

“So, over the last seven or so years, we created this non-profit to help assist manufacturers and employers in the area to work with the local school districts, parents, students, and guidance counselors, to educate them about the opportunities for internships and careers in manufacturing. It’s been a success story and manufacturing has stepped up and taken the lead to assist in that effort.

“Just last year, we held over 20 manufacturing events and attracted over 2,100 students and other participants to help match students with local internships and educate them about careers in engineering and CAD (Computer Assisted Design) and all the other curriculums,” Frank says. In addition, the Village also worked with the local Harper Community College to help it re-start a dormant manufacturing certificate program so that high school students could work their internships while also getting the necessary college certificates that would help further their careers.
While the Village is investing in the area’s next generation of skilled factory and manufacturing workers, it is also continuing to invest in its infrastructure – sometimes using its own funds, sometimes leveraging other public monies, and sometimes partnering with the private sector. “Right now, we’ve got some major infrastructure projects in partnership with the State of Illinois,” says Frank. “Schaumburg is conveniently located near three expressways so we’ve got two toll-way interchange projects going on to the tune of roughly $50 million of local investment to make that happen on the Village’s behalf. That will open up access for employers and residents. It’s a huge boost to our community to have these new access points into Schaumburg.”

The Village, itself, is investing $5 million into the expressway to O’Hare International Airport, and Frank reports that, this year, it will set aside nearly $40 million from its capital improvement funds for its streets, bike paths, green initiatives, and other municipal projects. “We go after grants to help pay for a lot of these through the Surface Transportation Act, but generally, we fund them through our capital improvement program. We are fortunate that Schaumburg’s a diverse community,” he explains. “We relied on our budget and reserves and now we’re going at a healthy pace so that we can rebuild those reserves. And we have a healthy budget to address our infrastructure needs.”

Frank doesn’t think that Schaumburg is likely to grow much larger in population because the Village is pretty much built out. “We’re at 75,000 people and there’s not a whole lot of farmland or greenspace for further development,” he says. “We’re surrounded by other suburban communities, so I think we’ll stabilize somewhere from 75 to 80 thousand. We have some small housing projects going on now that will add some residents; we’ve got an apartment complex being built that will add 220 units; we’ve got a couple of developments which will add 150 row homes. Some spot infill, here and there, but for the most part Schaumburg’s an established, mature community.”

And Frank adds that Schaumburg, Illinois serves its residents very well. “Schaumburg’s a very progressive community; it’s not your typical suburban city,” he says, proudly. “We’re unique in that we have our own airport; we have a minor league baseball team; we’ve got a performing arts center; and a 442-seat theater next to the Village Hall that offers different programs – the local symphony orchestra, plays, and dance. We partner with our park and library districts to hold events and concerts throughout the year. We have 90 miles of bike paths, gold-ribbon, award-winning parks, and all sorts of facilities to serve our great schools and the families in the area.”

Once a rural, farming community, today, modern Schaumburg is, indeed, a robust and thriving center of life and commerce. And it seems that life in the “Golden Corridor” has never been better.

Check out this handpicked feature on Tidewater Homes – A boutique builder.

WHERE: :In Cook County, Illinois, northwest of Chicago 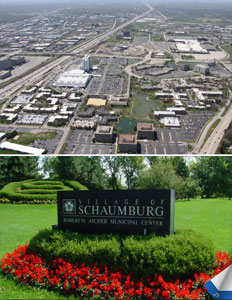