East Lansing, Michigan – A community energized for the future

A community energized for the future

Established back in 1907, today the City of East Lansing, Michigan is a Big 10 college town that thrives off of continued community support. Home to Michigan State University (MSU) – a renowned U.S. research institution – East Lansing has a population nearing 49,000 that includes a diverse and inviting community of talented intellectuals from around the world.

Tom Fehrenbach, the city’s Director of Planning, Building, and Development, states, “Our fate is intertwined with the university. Having MSU here has helped to boost population growth, strengthen the housing market, and coordinate efforts to protect the community during the COVID-19 pandemic.”

Enrollment and employment hikes at MSU have been catalysts for population growth, particularly through one of East Lansing’s major businesses, MSU Federal Credit Union (MSUFCU). A top employer and an aid in revenue generation, MSUFCU has expanded significantly with continued growth in the pipeline, including the construction of a 7-story office building in the downtown area. Although the city has limited industrial land, East Lansing hosts many small-to-mid-size enterprises focused on research and development that also supplement population and business growth. 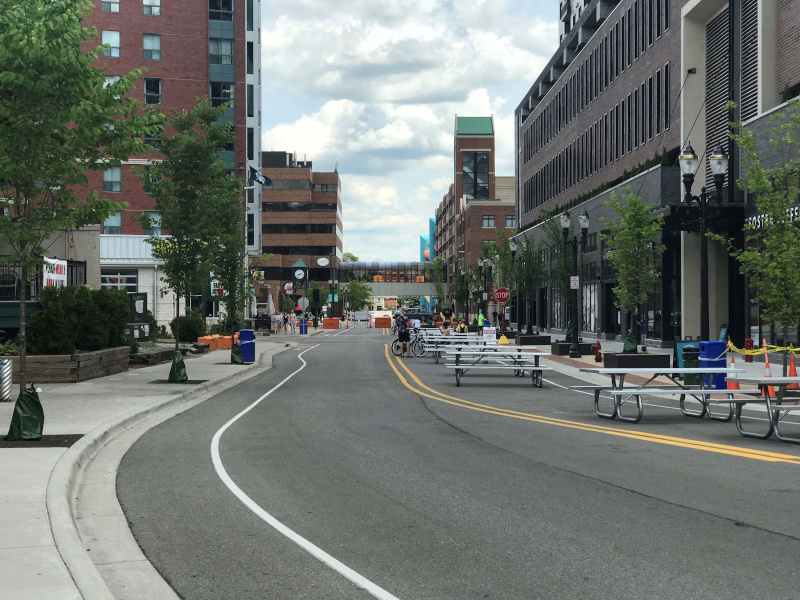 East Lansing’s workforce development does not solely rely on MSU and its extensions. The city can direct individuals to training and programming opportunities in skilled trades through the local Capital Area Michigan Works Program office, in partnership with Lansing Community College. With the help of regional organizations, like Lansing Economic Area Partnership, the city has additional resources to build its workforce on a regional basis.

Fehrenbach explains, “That’s the way we leverage the limited city staffing resources that we have. We’re working to improve the entrepreneurship pipeline partnership with MSU so that more companies can develop from it. We have made significant strides in the past 10 years, especially after MSU moved their entrepreneurship activities into a building outside of campus to strengthen their focus on the program. We’re trying to build on that momentum, get more companies to spin out and find locations right in downtown East Lansing; be part of the culture and the community here as our amenity mix has strengthened. The downtown is a cooler place to be.”

From a residential standpoint, MSU shapes the look of the housing market, with rental housing and multifamily developments all situated around the campus. The market increased significantly in the last five years thanks to new rental housing. The city has also partnered with private investors to develop mixed-use properties, including housing opportunities for those 55 years of age  and older and low-to-moderate-income earners. These developments offer several amenities, including new restaurants, service providers, a new hotel, and the region’s first urban Target with a small-format grocery store.

The city’s strong network of neighborhoods features what Fehrenbach calls “interesting architecture,” some historic districts, multi-family medium-density communities, and a high-density downtown. These areas will include several new housing developments for seniors, which are currently underway. For example, Burcham Hills Senior Housing Community has a major addition to the property in the works, while Provision Living, a three-phase project, will add around 220 units to the city. Like any thriving housing market, East Lansing’s comes with its own downsides, particularly that the city has a limited inventory, with a lot of demand, but not enough supply. Fehrenbach notes, “Those are some of the things we will be grappling with, as we’re just kicking off a housing study for the future planning effort around housing.”

Additional city developments include large projects such as mixed-use apartments, retail establishments, and restaurants. Meanwhile, East Lansing is boosting its hotel offerings. Spring Hill Suites redeveloped an old Howard Johnson, which has about 88 units, and a new 4-star Graduate Hotel with about 194 units is set to open downtown.

In the areas surrounding these new developments, many improvements are being made as part of East Lansing City Council’s commitment to infrastructure renewal. The city has worked closely with developers to service their facilities and provide safe and reliable access to sewers and water. The city invested $80 million in the past five years to upgrade the  Water Resource Recovery Facility (WRRF), the Woodingham Pump Station, major sewer systems, and water mains. These projects include replacing over 2.5 miles of water mains each year and first-generation water lines, relining and replacing sewer systems, reconstructing five to six miles of streets per year, and extending the service life of roads with crack sealant and paving. The city has also improves sidewalk accessibility  like the ones on Michigan Avenue, as well as other non-motorized transportation improvements, with the addition of bike lanes and pathways.

According to the city’s Department of Public Works Director Scott House, “Our services at the city are the best in the region for winter maintenance. In the spring and summer, we ensure that the streets are clean, including the bike lanes.” East Lansing also works closely with private vendors to install fiber and boost their technology infrastructure as part of the Michigan Metro Act passed in 2002. They keep vendors informed of upcoming building and infrastructure projects to coordinate with them and create a minimal impact to residents. 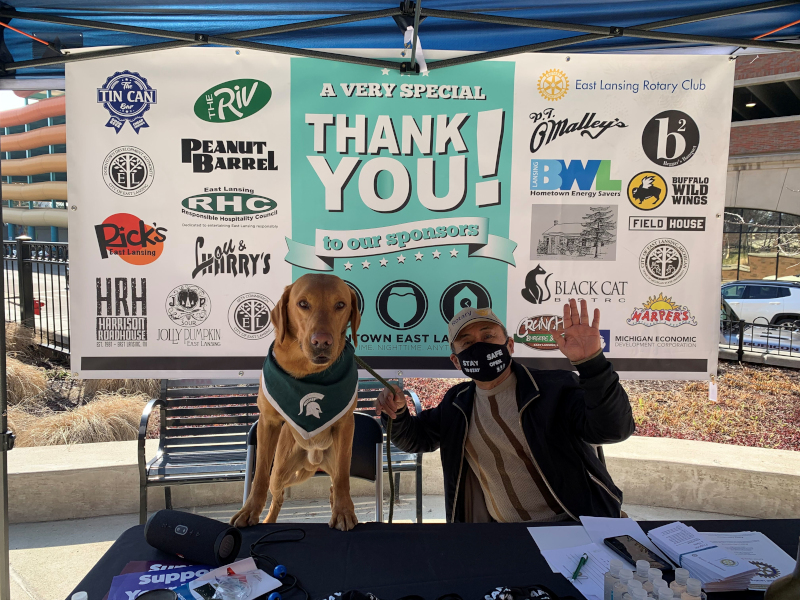 Weekend Warrior with Zeke the Wonderdog

To operate the city on limited environmental impact, the city continues to implement several green initiatives. They installed a solar field  at a capped landfill, established a Green Fleet Policy with the first hydraulic hybrid recycling truck in the state and an environment commission, and opened recycling and waste diversion/reduction facilities, including a  Styrofoam recycling drop-off site , and a regional Material Recovery Facility, which opened on April 20. “Every week, we prevent the equivalent of an elephant  of Styrofoam, volumetrically, from being disposed of in the landfill,” says House. Further initiatives include banning coal tar used in driveway and road sealant that can be toxic to aquatic animals and the local watershed. The city’s street team also calibrates their snowplows to limit the salt amount usage, thereby preventing contamination of the wetlands.

Finally, the city updated East Lansing’s WRRF that services the city, Meridian Township, and MSU. The upgraded wastewater treatment technology reduces energy usage, and generates methane to power the plant through digestion, using a combined heat and power unit. It also reduces byproducts sent to landfill to comply with the Clean Water Act.

While East Lansing diligently works to protect the environment, it has shifted its focus to COVID-19 pandemic support. The Ingham County Health Department and two major hospital systems, Sparrow Healthcare and McLaren Health Care, are the area’s primary healthcare providers managing the  services for fighting to control the coronavirus, including vaccine distribution. McLaren, in particular, recently expanded by developing a new hospital in Lansing following a $50-60 million investment. MSU’s College of Human Medicine not only has a strong partnership with both systems, but MSU, as a higher learning institution, has also partnered with e the City to assist in developing marketing and outreach campaigns that have helped to inform the community on how to stay safe during the pandemic.

Adam Cummins, East Lansing’s Community & Economic Development Administrator, and his team have had to get creative in developing business support programs and strategies and going after grant opportunities to help local businesses survive during the pandemic and recover afterward. The team used federal, state and local funds through the Downtown Development Authority and community crowdfunding to encourage customers to safely return to local businesses Programming for patrons included the six-week trial run of the Weekend Warrior program, which encouraged downtown customers to eat at  newly established outdoor dining locations set up in the city’s public spaces in the winter and early spring, with the help of the East Lansing Rotary Club managing outdoor heaters.

Meanwhile, the crowdfunded Place Project financed the outdoor dining offerings and other downtown programming. Additional incentives for businesses and restaurants to recover have and will soon include the implementation of a Downtown Underground Market in an under-utilized parking garage, the installation of parklet systems and the Curbside Pickup-Only Program, with designated parking spaces near businesses for picking up take-out food and online orders.

Despite the COVID crisis, the community has come together to support each other and local businesses during a challenging and disheartening time. Fehrenbach attributes this to the humanity of the community, calling it “energizing.” He shares, “I think that, hopefully, some of these efforts will bear fruit, as we get past this pandemic and into brighter days ahead.”

Where: Just east of the state capital of Lansing, Michigan