Known as the gateway to the Kawarthas “cottage country,” a large recreational region of the Province of Ontario, Peterborough is a city of approximately 83,000 people, located on the Otonabee River, some 78 miles northeast of Toronto and about 167 miles southwest of Ottawa. The seat of Peterborough County, and incorporated as a city in 1905, it is named in honor of Peter Robinson, an early Canadian politician who oversaw the first major immigration to the area, which was originally the home of the Iroquois and Mississaugas peoples.

At one time in the past, Peterborough’s nickname was “The Electric City,” because it was the first town in Canada to use electric streetlights with power generated from the Otonabee River. That spirit of innovation and invention is what helped Peterborough attract such large, multi-national companies over the years, including Siemens, Rolls Royce, General Electric, and Pepsico’s Quaker Oats division, which established its first plant in the city in 1902, when it was known as the America Cereal Company, specifically because of Peterborough’s early utilization of hydro-electrical power. 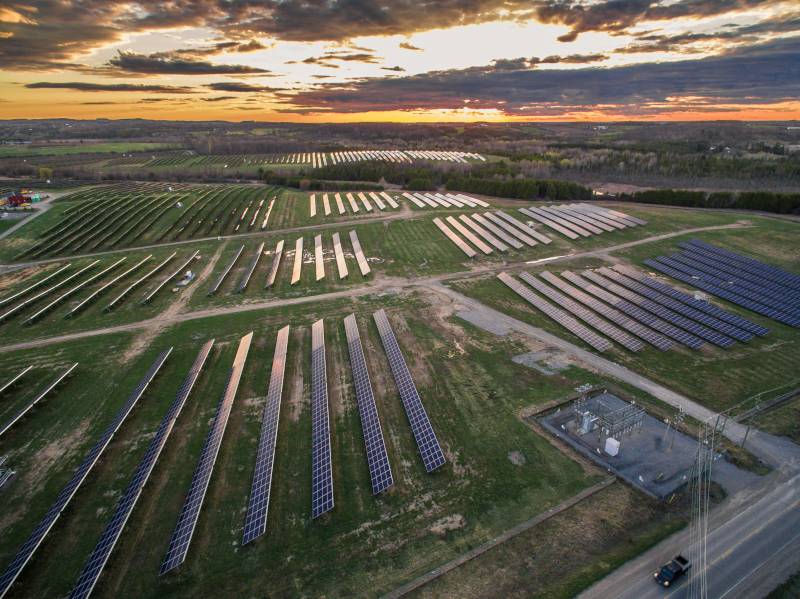 Today, even though there has been somewhat of a decline in the city’s manufacturing sector over the past several years (General Electric closed its last remaining facility in 2018), Rolls Royce still operates two facilities in town, Quaker Oats still has downtown Peterborough smelling like chocolate chip cookies, and Coca-Cola’s Minute Maid division is constructing an $85-million milk production facility for its Fairlife brand, which is due to open this year, adding about 35 new jobs.

“We also have had a number of companies growing in the aerospace sector,” says Rhonda Keenan, President & CEO for Peterborough and the Kawarthas Economic Development organization, which works to promote, facilitate, and develop a strong and unified economic development presence within the region. “We have the Peterborough Airport, which has been rapidly growing and expanding due to investment in infrastructure from the municipal, provincial, and federal levels.  A number of companies in the maintenance and overhaul business have been expanding, as well.” Flying Colours Corp. is one such company, providing maintenance, repair and overhaul services, completions, refurbishments, special mission modifications, avionics upgrades and installations, exterior paintwork, and aircraft transaction support.

Most important, however, in regards to Peterborough’s future economic development, is the city’s desire to position itself as Canada’s premier destination for clean tech companies, with a major focus on entrepreneurship and innovation in the field of water technology. “Water is something that a lot of our entrepreneurs are focused on,” Keenan explains. “We have a number of companies that have started here, with water technologies that are applicable to many different sectors, such as food production and even the mining industry – any type of industry that is using water that is going to go back into a new cycle. Making sure that they are able to remove contaminants is a specialty that we have here.”

A key player in the realm of advanced water technology is Fleming College’s Centre for Advancement of Water and Wastewater Technologies (CAWT). CAWT is an internationally-recognized research institute in Peterborough that conducts research in the areas of water and wastewater treatment. It is comprised of a core group of scientists, faculty researchers, and technologists, as well as a community of associates from the academic, industrial, and private sectors, whose goal is to turn innovative ideas into a market advantage for a cleaner world. “We are a good pilot testing ground for new products and that’s really where a lot of the companies have started from,” Keenan adds. “We test and validate a lot of new products coming on the market.”

Another key player is Trent University, which is currently partnering with the city to create Cleantech Commons, a nascent industrial park near the university with a focus on clean technology. “There are specific criteria for businesses that want to locate in that space,” says Peterborough’s Mayor, Diane Therrien. “There’s such a demand, these days, for these new technologies around food and water and how we build a more sustainable and green future. So, we’re trying to position Peterborough as a leader and cutting edge community on that front.”

For its part, the city is installing trails, roads, sewers, and water services to support the creation of Cleantech Commons. Also, in partnership with Trent University, the city has hired Martin Yuill as Executive Director for the enterprise. “He’s responsible for spearheading a lot of the recruitment initiatives, going out and finding the companies that would be a good fit,” says Therrien. “So, as we combine the expertise of CAWT with the researchers at Trent University, Yuill can make a really strong case when talking to those companies,” Keenan adds. “We also leverage our business community. Because we have so many startups and long-standing experts in the field, we pool them together in an advisory committee concept to say where we should be going and how we should be arming those companies to go with the supply chain, here.” 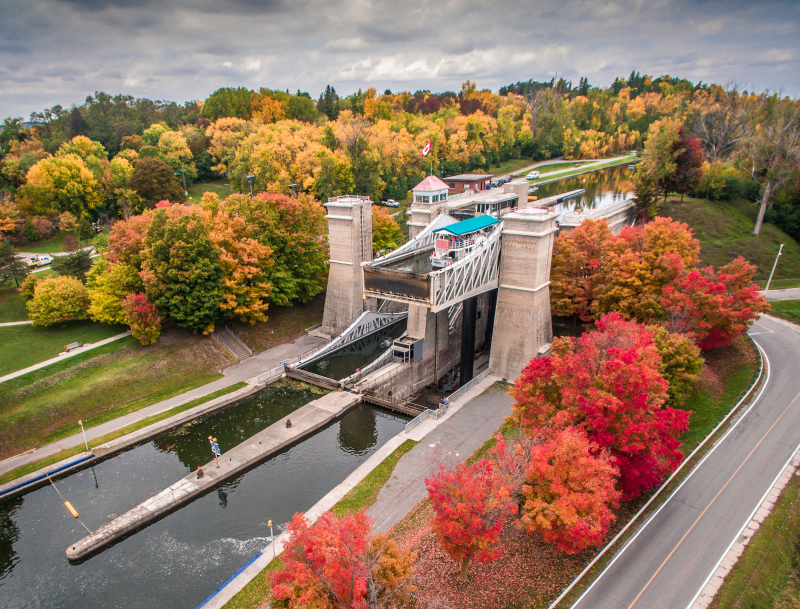 Yuill, by the way, is the former President and CEO of the Greater Peterborough Innovation Cluster (GPIC), which is the region’s incubation and innovation nexus, located in a building in downtown Peterborough called VentureNorth. Since opening in 2016, VentureNorth has emerged as one of the city’s most important buildings— “spaces” is perhaps a better word to describe it—symbolizing Peterborough’s path as an innovative, entrepreneurial destination which encourages startups and existing businesses to grow and thrive. VentureNorth creates an ecosystem where entrepreneurs and business people can connect and work alongside each other in open concept spaces. “The business community in Peterborough is very supportive of one another,” Therrien states. “There’s very much a spirit of cooperation and not competition in the businesses, here, and when new businesses are starting out, the community rallies to support them and make sure they succeed. There’s a saying in the city and county that ‘we’re all in this together,’ and that is certainly something that you see day-to-day throughout the Peterborough community.”

As Peterborough promotes itself as leader in innovation and sustainability, Therrien notes that it is, likewise, preparing itself for an incipient population boom. Significant growth is expected over the next several years, partly due to the recent extension of Ontario Highway 407, connecting it to Highway 115/35 south of Peterborough, and shortening the drive to Toronto. “We have been identified as one of the fastest-growing metropolitan areas in the country, and so, we have a lot of folks moving here, primarily from the Greater Toronto area/Durham region, because we have comparatively cheaper housing prices,” Therrien shares. “The population of the city proper is around 83,000 people. And that’s gone up in the last decade and we see it growing with new subdivisions and apartment complexes that are being built, right now. There are several that are being built in the downtown area, as well, taking advantage of heritage facades and expanding on their footprint. We are trying to emphasize intensification and building on brownfields and in the built-up areas, rather than greenfield sprawl.” “And because of that proximity to the Greater Toronto area, we know that we are forecast to grow by about 33,000 people over the next 22-25 years,” Keenan adds. “So, we are trying to systematically grow and manage that growth in a sustainable way.”

Therrien adds that the city is investing heavily in sustainable infrastructure as it prepares for the new growth. “We had a big flood in 2004 and since then, there’s been an emphasis on ensuring that that doesn’t happen again,” she avers. “We have a project coming up along Bethune Street and that’s being financed by the city, as well as the provincial and federal governments. It’s a big project – it involves digging up that whole road and re-doing all the stormwater piping underneath. The end result is that we’ll be turning that stretch of road, essentially, into a linear park. So, right now, the emphasis there is on vehicular traffic, but we’re going to be moving a bit away from that. We’re going to have cycling lanes, a lot of pedestrian spaces, and limiting the amount of traffic that will be able to access that street.”

In fact, the city is investing in many bike lanes and pedestrian trails. “One of the great things about our community is that we’re in close proximity to nature,” Therrien remarks. “We’re surrounded by cottage country, up here, and we’re fortunate to have some large swaths of greenspace within our urban center, as well. So, we try to make sure that the cycling and walking paths that traverse those outer green spaces are also connected to the cycling structure that we have going through the urban areas and the downtown core.”

With its long-standing devotion to innovation and invention, coupled with low housing prices, a plethora of cultural activities, a supportive business sector, and a generally high quality of life, it’s no wonder that Peterborough is considered one of the best places to retire in Ontario, as well as among the best places in which to invest. And as it grows with all the amenities of a big city, but with a small-town feel, both Keenan and Therrien believe it is primed to become that new center of clean tech entrepreneurship for Canada. “This community is growing through innovation and sustainability,” Keenan observes. “And I think that will be the powerhouse of this community, going forward.” Therrien agrees: “Peterborough is an open and inclusive community,” she declares. “We are growing, and not just in population, but in diversity. And we’re moving forward in a progressive way.”

WHERE: On the Otonabee River, northeast of Toronto

One of Ontario’s top universities, Trent University was founded on the ideal of interactive learning that’s personal, purposeful and transformative. Trent is known for sustainability, and ranks among the top universities in the world for commitment to environmental leadership. Trent University is also home to Cleantech Commons, Canada’s premier destination for green and low-carbon technology research.