The heart of Muskoka

Business View Magazine interviews representatives from Bracebridge, Ontario, as part of our focus on best business practices of Canadian towns and cities.

Bracebridge is a town of approximately 16,000 in the Muskoka region of Ontario, Canada. Due to its proximity to Lake Muskoka, to which it is connected by six miles of the Muskoka River, and by the promise of abundant water power afforded by an impressive waterfall in the center of town, the area was first settled in the 1860s by entrepreneurs who wished to take advantage of the Falls to power their factories. By 1870, the village of Bracebridge had a population of about 400. It became a town in 1889, and the first in Ontario to have its own hydro generating station. 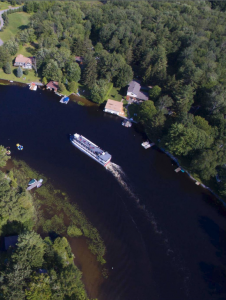 Today, Bracebridge is the seat of the regional government, a center of tourism for the Muskoka area, and a transportation and economic hub for many of the smaller, surrounding communities. Recently, Business View Magazine spoke with three representatives of the town’s government: Mayor Graydon Smith; Manager of Economic Development, Randy Mattice; and Chief Administrative Officer, John Sisson, to find out what is happening in modern day Bracebridge. The following is an edited transcript of that conversation.

BVM: Mayor Smith, can you speak about the highlights of life in Bracebridge and its role as a tourism and economic hub for the area?

Smith: “Bracebridge is a growing community, based on our last census numbers. We’re a town with approximately 16,000 full-time residents. In the summertime, that number swells, considerably, because we are in the heart of cottage country in Ontario’s Muskoka region, so our community plays a very central role in that way. It’s also an economic hub and a provider not only for people in our own community, but for communities that surround Bracebridge. “We have gone through some hard times in recent years, but we are quite excited about what we have going on over the last few years. Starting in 2005, and carrying on for a few years after, we did see the loss of some manufacturing jobs in our community. We were a manufacturing center – part of that in the automotive sector – and we took a pretty big hit in the mid-2000s, as well as in 2008 when the real drama came.

“So, we’ve moved our economy into a more diversified state. We have some niche manufacturing going on, and we’re an institutional hub for the courts, regional and local government, hospitals, and schools. We also have new investment in the medical marijuana field – we’ve got a 60,000-sq.-ft., private facility that will be opening and cultivating very soon. We also have a new private high school coming, called Dewey Institute, focused on international students. It’s an extension of services that they already provide in Mississauga. They will be bringing international students to our community for secondary education, in preparation for post-secondary education, and that will add a new flavor to our community.

“On the housing front, it continues to boom in our area. We’ve got a number of major builders, including Mattamy Homes that have made a significant investment in the community and are actively selling phases of their development, right now. Loon Call is another company that’s focusing on a slightly different sector of housing in our community, which are more affordable units and smaller homes. And they’re having great success with their development, as well.

“So, we see a lot of people coming to this community for a lot of different reasons. Some are those who have chosen to retire here; we’re definitely a destination for people who have wrapped up their careers somewhere else and want to be based in one of the most beautiful areas in Canada. But we’re also seeing people who are coming here and making this their home, even if their primary job is somewhere else, because we do have a one gigabit fiber service that runs throughout the town, and I think one of the dreams of people in this area is that they may have a job in Toronto, but they’d really like to do most of the work from their cottage. And, with the fiber service, and the technological upgrades that we’ve seen in the community, this is allowing them to do that. So, more and more people of all ages are coming here, and we’re certainly excited about that.

“On the public front, we just opened a new fire hall, which is a significant upgrade over the previous facility that we had. It allows our department to function much more efficiently and effectively. It also functions as a training space for them as they constantly upgrade their skills. And that was combined with an ambulance/EMS facility. We put those two facilities together, working with the district government, because they look after ambulance and we look after fire. It was a project that was able to re-use some land that had been vacant for about two decades in the heart of the community, formerly owned by Hydro One, and repurpose it into a great community facility that we’ve received nothing but compliments about.

“Those are things we’ve done, but on the horizon, there’s certainly more. We’re looking at building a significant community hub through a recreation/library, which would feature a new, single pad ice arena, that would be expandable in the future to a twin pad; a field house; and a full library complex, relocating our current library service to the new site. That will be a facility unlike any other in the region and one that will draw people to the community for a variety of reasons.”

BVM: Randy, you’re the Manager of Economic Development. Can you talk about any recent projects or programs under your department’s purview?

Mattice: “We’re seeing an influx of new investment in the community. We’re about a two-hour drive from Toronto, and we’re seeing some interest from Millennials and young entrepreneurs who want to get out of the metropolitan lifestyle and the increasing costs of living in Toronto, and are looking at smaller communities in which to establish themselves. So we’re seeing a lot of new investment, particularly in our downtown core. They’re young investors, and instead of just sitting on a property and letting it accumulate in value, they want to make these buildings into working buildings. So, they’re spending the money to renovate the buildings to bring them up to standards, and to make them into desirable spaces for new businesses to want to locate.

“We do have a Community Improvement Plan, which provides some municipal incentives for doing upgrades to the older building stock, particularly downtown. They can access some grants and interest-free loans for façade improvements, for building improvements, for property improvements, and for residential rehabilitation. If they have a mixed-use building and they want to put some residential units above the commercial space on the main floor, we will assist with some funding to do that. We have signage grants that not only can be accessed by the property owner, but also by the tenants that are establishing these new businesses. 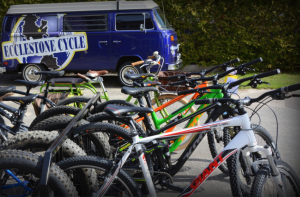 “So that’s been a very positive program for the last three years. We’ve been maxing out our contribution to the program, which is around $100,000, and we’re seeing that money being leveraged to close to $750,000 to a million dollars worth of new investment in the downtown. And we’re seeing a positive transition in our downtown. Our commercial vacancy rate, which used to be in mid-double digits, is now in the single digits. We’re also seeing a stable retail climate, there. Stores have been here for two or three years, now; they are successful and continue to be successful and it’s something we like to see in our community.”

BVM: John, what’s on your plate as Chief Administrative Officer?

Sisson: “We have just started a two-pronged transit system in town. We have a conventional transit system that runs a regular route around town that’s used for shopping, for employment, and for students. It runs a fixed route in the community, six days a week. We also have a parallel mobility system available, so that if an individual has mobility issues, they’re able to request a taxi unit to arrive at their home and that unit can take them anywhere they want to go within our community. The introduction of that new transit system is an initiative that started two years ago, and it’s fully integrated now, and it is having great success in the community.

“Other things that we’ve been doing: Over the last couple of years, the town has been subjected to fairly significant springtime flooding. This area of Muskoka has an extensive river system, and so, we have been systematically been redoing several bridges and doing upgrades to our road system to ensure that we are mitigating against any of the damages that sometimes happen as a result of severe weather events.”

BVM: Anything else that anyone would like our readers to know about Bracebridge?

Smith: “I really do believe it’s one of the best places that you can live in Ontario. We’ve got a mix of amenities in this community, plus proximity to larger centers, which means you can have it all from a lifestyle perspective. We’re located in the place where everybody wants to be, which is near lakes with incredibly beautiful terrain and scenic vistas and the ability to jump into the water anytime you want. But at the same time, we’re a thriving economic hub community for the region and we’re two hours away from Toronto and all the amenities that it has to offer.”

Mattice: “I echo what the Mayor said. In economic development, we’re dealing with a lot of industrial and commercial investment and we try to bring new businesses to town. But, I always say you can provide the land, you can provide the labor force, but what do you have to offer your employees after hours? And I think the Mayor summed it up. We have the amenities that businesses like, because a happy employee is a productive employee. And to know that after work you can go home and take advantage of the 1,600 lakes that are located in Muskoka, or jump in the river, or go for a hike on one of our beautiful trails, or bike or drive through the community. We even have people that take their boats to work in the summer.”

Smith: “Even though a lot of people come here for a lot of different reasons, we know that the growth of the economy is what is going to sustain our community in the long run and so we’ve done our very best to shape our policies and programs around attracting business and being a welcoming and open community for business. And we look forward to the opportunity to talk to anybody who feels that Bracebridge may be the right fit for them.”

Check out this handpicked feature on Ingersoll, Ontario – Prosperity through progress.

WHERE: The Muskoka region of Ontario, Canada 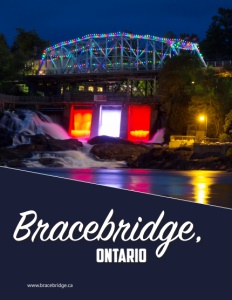