Ingersoll, Ontario is a town of approximately 12,200 in Oxford County on the Thames River in southwestern Ontario, Canada. The area was first settled by Thomas Ingersoll, who received a land grant of 66,000 acres from Governor John Graves Simcoe in 1793. It was incorporated as a village in 1852 and changed its status to town in 1862. From the mid 1800s to the early 1900s, Ingersoll was well known for the production of cheddar cheese, a craft introduced to Canada by English and Scottish immigrants. Indeed, in 1866, a giant block of cheese weighing 7,300 pounds was produced at the James Harris Cheese Factory and was exhibited in both England and the United States.

Sandra Lawson is Ingersoll, Ontario’s Town Engineer, tasked with overseeing the design and administration of the town’s capital projects and infrastructure. She explains that, currently, she and her staff are working on bringing those areas of the community which are still on septic tanks and wells onto the town’s water and sewer systems. “Over the last three years, we have spent upwards of four or five million dollars, along with the county, installing and reconstructing whole neighborhoods – putting in sanitary sewers, new water mains, new storm drains, curbing gutters because a lot of these areas are still rural cross sections, and improving drainage,” she says.

A major project was recently completed on Holcroft Street. A ten-meter deep sanitary trunk main was constructed in 2014, and last year it was extended to the southern part of town in order to spur the development of 174 single housing units. Part of the project’s $2.4 million cost, which included the removal and replacement of 100 trees and the addition of sidewalks, was paid for by the area’s developers, while its residents will pay a connection fee for use of the sanitary line. Oxford County, which is ultimately responsible for sanitary and water infrastructure for its citizens, also contributed tax dollars to the project.

Lawson also mentions another big, on- going infrastructure project – a $3 million upgrade to an existing, older part of town. “It’s been on the books for about 15 years: replacing all the sanitary, all the storm, and all the water mains, which are all lead.”

“We’re also looking at active transportation,” Lawson adds. “My predecessor started with putting in dedicated cycling routes along one of our major streets and since then we’ve developed a cycling master plan. We’re implementing that every year either with dedicated bicycling lanes or with ‘Share the Road’ type signage. And we’re doing that in conjunction with the County of Oxford, so that some of these routes join up with their cycling master plan; some of their routes coming into town join up with ours.”

Recently, Ingersoll, Ontario got some funding from the Canada 150 Community Infrastructure Program which is part of the Government of Canada’s celebration of the country’s 150th anniversary of Confederation. Lawson says that the money will go to replacing all the windows in the Town Hall, the building’s boiler, and its antiquated building automation system. “So, we’re replacing all of that to make the building more efficient, and we’re also looking at replacing all the lighting in the building with LEDs,” she says. The town has already replaced all its street lighting with LEDs and hopes to replace the lighting in other town buildings over the next couple of years with LEDs, as well.

Ingersoll, Ontario has certainly grown and developed from the days when it was the “Cheese Capital” of Ontario. Today, the town is a great place to live and work and is now better known as “Festival Town Ontario.” It offers great schools, a variety of parks and open spaces, unique shops, various cultural offerings, many employment opportunities, and a wide range of new, quality homes in desirable locations. It is a town that truly lives up to its motto: “Prosperity Through Progress.”

Check out this handpicked feature on Petawawa, Ontario – Dynamic by nature.

WHERE: : In Oxford County, in southwestern Ontario 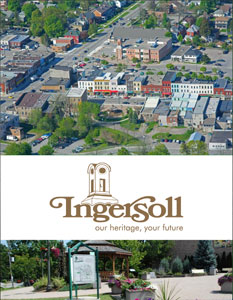