Unique in the Sunshine State

The Town of Davie is located in Broward County, Florida, approximately five miles from the Atlantic Ocean, five miles from the Everglades Conservation area, and about 16 miles from the cities of Miami and Boca Raton. The history of Davie dates back to the early 1900s when its first settlers arrived and named the town “Zona” in recognition of their former home in the Panama Canal Zone. The community was renamed Davie in 1916, in recognition of Robert Parsell Davie’s assistance in draining the Everglades swamplands that the town was carved out of.

Today, Davie is home to over 96,000 residents who inhabit the town’s 36 square miles. Davie is a mix of commercial, residential, industrial, educational, and rural communities, as well as a significant equestrian population in its western section. The town has always had a reputation as a “Cowboy” town, with many of its earlier buildings having a decidedly “Wild West” architecture. Indeed, one of Davie’s most notable features is the Bergeron Rodeo Grounds which were founded in the early 1940s, and today hosts concerts, family entertainment, car shows, horse shows, and other types of events.

Giovanni Moss is Davie’s Director of Community Development, with the responsibility of overseeing the Town’s Community Redevelopment Agency or CRA. CRAs are local economic development agencies whose function is to preserve and protect a community’s tax base, alleviate conditions of slum and blight, facilitate affordable housing, and stimulate public sector participation within a defined redevelopment area. Davie’s CRA covers approximately 1,104 acres on the east side of town.

“The Town’s CRA has been doing a lot of great things over the last ten years as far as trying to plan for development,” says Moss, “and we have some good traction to move forward with a number of projects over the next year or two. Right now, we have about $130 million mixed-use development projects online, featuring over 600 units of market-rate housing and quite a bit of retail and commercial. We’re getting ready to do some major development to our main, downtown road – about $2 million to make it pedestrian-friendly, with landscaped medians. We’re also doing about $18 million of infrastructure improvement on water and sewer to improve capacity within the CRA. In addition, we’re looking at a 22-acre Town Hall campus on the Rodeo Grounds, and hope to have an RFP to solicit a private partner to develop that entire site which might include a new Town Hall, a parking structure of some type, and the development of a four-acre parcel for mixed-use development.”

“Within the CRA we’re actually developing a downtown,” Moss adds. “Most cities have one and are trying to redevelop it. Ours was never one that was largely utilized but I think we’re in a unique position to create a niche market for a western-themed downtown. The landscape is going to be drastically changed in the next two years; we’re going to see a lot of vertical improvements, roadway improvements, and a new Town Hall and Community centerpiece.”

In addition, Moss says that the CRA is also planning to cover the cost for over 300 residential and 15 commercial units on the east side of town to get off septic and onto the town’s sanitary sewer system. “That’s an $8,000 benefit to each household,” he explains. “Of course the utility costs are going to go up a bit, but it relieves them from having issues when it comes to environmental concerns with septic tanks, such as leakage.”

Phillip Holste is Davie’s Assistant Town Administrator, responsible for buildings, engineering, planning and zoning, public works, and economic development. He reports that the town has seen about $500 million worth of growth and new construction over the past few years in a combination of commercial, residential, and industrial projects. “Basically, the emphasis has been on identified redevelopment areas where we’re happy to see new development come in,” he says. “The impetus for the development of Davie that we’re seeing going on today, is driven through the Town’s Regional Activity Center.”

Regional Activity Centers (RACs) are land-use designations intended to encourage attractive and functional mixed living, working, shopping, education, and recreational activities. Examples of areas which may be appropriate include downtown and redevelopment areas, regional employment centers, centers for tourism, and areas surrounding regional community facilities such as airports, colleges and universities, convention centers, or governmental complexes. Davie’s Regional Activity Center Designation was adopted in 1998 and covers approximately 2,200 acres east of University Avenue. The Master Plan for the RAC was adopted in 2006, with the intent of creating a “multi-purpose, pedestrian-friendly, and interconnected mixed-use village with the benefits of access to transit, variable housing costs, and economic development opportunities.”

Within the RAC is a project called the Academical Village, which is being developed by Nova Southeastern University (NSU) in partnership with the Brandon Company, a local real estate development corporation. The Village will comprise 2,500,000 square feet of premier retail, residential, hotel, office, and medical space and will be located on thirty acres of property. 825 urban-style apartments will feature balconies, campus views, a pool, and health facilities. The project will be anchored by 400,000 square feet of retail space. Office space will include up to 1,100,000 square feet for NSU research, classrooms, health care, and professional use. Phase I will comprise 350 apartments, 110,000 square feet of retail space, and 200,000 square feet of office space. Plans are currently underway for a hotel to be built during Phase II. The hotel will take advantage of ongoing campus activity, NSU amenities and facilities, and the central Broward marketplace. “The Academical Village will also be the home of a new hospital by HCA (Hospital Corporation of America),” Holste says. “Their hospital is currently located in one of our neighboring municipalities and they’re moving it to Davie and making a $200 million investment.”

Mr. Holste also oversees Davie’s capital improvement plans. “The Town has a ten-year capital plan that outlines its future infrastructure needs,” he states. “We’re seeking to enhance our roadway system; we’re widening roadways; we’re doing beautification projects on the roadways within the Regional Activity Center; we’re also allocating funding towards upgrading our utilities infrastructure. And within the CRA, itself, we’re spending a significant amount of money on drainage and utilities upgrades and enhancements. In addition, we’re building new roadways to serve as bypass roads for our Davie Road corridor, because right now people just drive through it and we want them to stay there. We’re investing $18 million in those roadway improvements between the Town, the CRA, and some of our partners in the state and the county.”

Over the past three years, Mr. Holste says that approximately two million square feet of commercial/industrial space opened up and the 1.5 million square foot, Davie Business Center is currently being built by the IDI Construction Company. “They’ve constructed two buildings and have an additional four buildings to go,” he says. Holste also notes that none of Davie’s current and ongoing improvements would have been possible if not for the town’s new water plant that opened in 2013. “That was a $120 million reverse osmosis membrane plant,” he says. “Without it, all this growth wouldn’t be occurring in Davie because we wouldn’t have had the water capacity. So that’s an investment we made at that time.”

As Davie’s population is expected to reach 100,000 within a few years, both Mr. Moss and Mr. Holste are optimistic about the town’s future – both as a prime destination for new business and as a great place to live for its current and future residents. “I think the town has come a long way from when it was known as a quiet equestrian location,” says Mr. Moss. “I think our geographical location is central to Broward County. We’re close to major highways and we’re fifteen minutes from the airport and the port.” “At the same time,” says Holste, “we still have the rural lifestyle in western Davie with our open spaces and our equestrian communities. The town is about 22,000 acres in size and about ten percent of that land – about 2,200 acres – is either preserved as a park or open-space land. I really feel that whatever anyone desires – Davie has it.”

Davie, Florida – the heart of Broward County and unique in the Sunshine State.

WHERE: : In Broward County, north of Miami 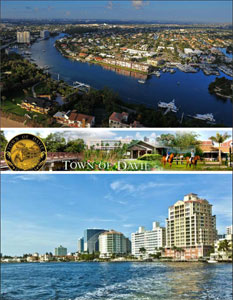