Town of Lloyd, New York – Where the mountains meet the river

Where the mountains meet the river

Business View Magazine interviews representatives of the Town of Lloyd, New York for our focus on Economic Development in U.S. Cities

Situated on the western bank of the Hudson River, the Town of Lloyd, New York (opposite Poughkeepsie) was originally part of the 1677 New Paltz Patent, a 40,000-acre parcel that stretched from the Shawangunk Mountains to the Hudson River.

An area where the Twaalfskill Creek empties into the Hudson is now the site of Bob Shepard Highland Landing Park.  The original site was used for commercial shipping as early as 1754, when Anthony Yelverton, a businessman from Poughkeepsie, traversed the Hudson with materials to build a house, a sawmill and brick factory. In 1777, he established the first of several ferries which connected Highland and Poughkeepsie. The settlement became known as Yelverton’s Landing (and, eventually, New Paltz Landing), and was the site of the Town of Lloyd’s first official business district, which welcomed the West Shore Railroad in 1883.

Soon, a new village developed on the higher ground above the landing – an area aptly called Highland – and steamboats began to shuttle freight and passengers between Highland Landing and New York City. Meanwhile, ferryboats were crossing the Hudson to Poughkeepsie several times a day. 1888 saw the completion of the Poughkeepsie-Highland Railroad Bridge and Central New England Railway and a westbound trolley line in 1897. Highland’s combined river, rail, and road connections were catalysts for much of the development that occurred in the neighboring hamlets.

Thousands of tourists would move through the village during the early part of the 20th century, drawn by the delights of the surrounding Illinois Mountain, the Hudson River, and the local inns, hotels, and boarding houses that had opened to accommodate them. 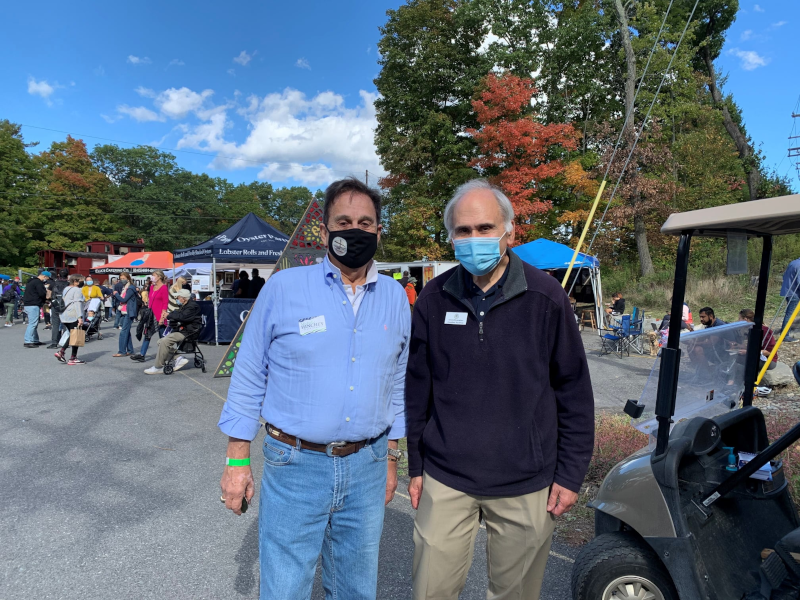 Charles Glasner, Chair of the Economic Development Committee, states, “The history of the town is fairly lengthy and in the 19th century, Lloyd was referred to as ‘the Gateway to Ulster County’, and a major part of its economic base was the development of guesthouses where people could stay for the weekend, or even a season. The other industry was agriculture – there were a lot of grape vineyards, strawberries, and apple orchards in addition to the variety of products that were manufactured in town. That was back then. Now, we have the Walkway Over the Hudson, which is a connector across the Hudson River and a section, in my opinion, of the extension of the Empire State Trail.”

Built as a double-track, steel cantilever railroad bridge that was completed in 1889, the original Walkway formed part of the Maybrook Railroad Line of the New Haven Railroad. At the time of its opening, it was the longest and highest railroad bridge in the world, stretching 1.28 miles long and soaring 212 feet high to the open sky. “At the height of the coal industry, the bridge actually helped develop the whole East Coast,” Glasner says. “They shipped a lot of goods by rail from Pennsylvania out west or going east across the river and then up to Boston and other industrial centers.”

And then, fatefully, on May 8, 1974, a fire started by a spark from a train’s brakes devastated the tracks after a water line meant to help fight fires on the bridge failed. “It destroyed the railroad use of the bridge,” Glasner confirms. “But thanks to the vision of some very determined individuals, it was redeveloped and opened as a pedestrian walkway and it’s now a State Historic Park.” The bridge was designated as a National Historic Civil Engineering Landmark by the American Society of Civil Engineers in 2009.

“Several years ago, the Town of Lloyd created its own rail trail, when rail trails were still kind of unknown,” picks up Town Supervisor Fred Pizzuto. “It was just kind of sacrosanct to the area. Now it ends at the West Shore, where the railroad bridge anchors into Ulster County. It’s now part of New York’s Empire State Trail, which runs from one end of the state to the other. The fortunate piece that we get to enjoy is that we have basically untold acres of land to develop into visitor parking, unlike where the bridge comes out on the east side in Poughkeepsie. We’re told the Walkway Over the Hudson is the second most active park in the state next to Niagara Falls, from a visitation standpoint, somewhere between 600,000 and 700,000 people a year.”

On that score, Pizzuto and Glasner are busy putting together an action plan with recommendations on how the town can further capitalize on the Walkway, a tourist attraction that Pizzuto acknowledges is “a gift to Lloyd.”

The town’s location, about an hour and a half north of New York City by train and directly across the river from Poughkeepsie, also gives Lloyd the strategic advantage of accessibility.

“In Poughkeepsie, you have Marist College, Vassar College, Bard College,” Pizzuto says, painting a geographic picture of the area concerned. “South of us is White Plains, and then, of course, New York City. We have access to the Taconic State Parkways and Routes I-84 and I-684 into the city. At one point in time, ours was the only bridge that got you from the east to the west side of the Hudson. Now, there’s the Kingston-Rhinecliff Bridge and the Newburgh-Beacon Bridge. So, the accessibility has broadened, but still we sit here on the West Shore and 12.5 million cars per year come over the bridge and through the Town of Lloyd. Given what’s just transpired in the last year and a half, we’re experiencing again a tremendous influx of people looking to move up and move out of New York, and even Westchester.”

Pizzuto confirms that the COVID-19 pandemic has driven numerous changes to economic activities in and around Lloyd, including outstripping the norm in terms of property appreciation, and boosting general town-building with the acquisition of new business. “The planning board is busting at the seams with projects,” Pizzuto says. “We’re fortunate that we have a water and sewer infrastructure that has capacity. It’s like somebody’s stuck an IV in our veins and they’re pumping it in. It’s a gem!” 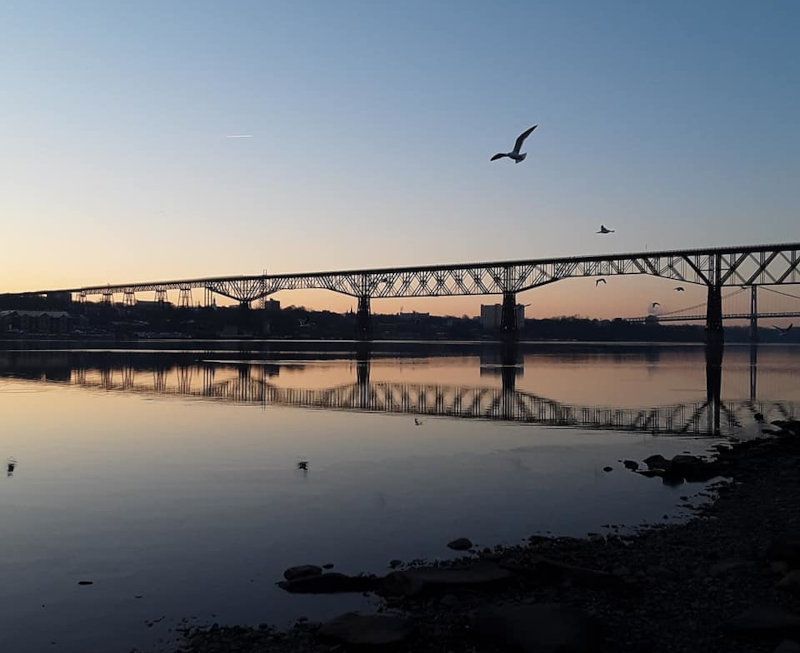 Although Lloyd has historically been deemed “affordable” compared to the lower parts of the state, the real estate market now is beyond anything Pizzuto has ever seen as far as property values. “You can’t go to Long Island anymore; there’s no room, you can’t afford it,” he says. “You can’t go south into New Jersey; there’s no room, you can’t afford it. The only other option is to come north. So, they’ve filled up Westchester, they’ve filled up Putnam and Rockland, and they’ve been working on the counties of Orange, Dutchess, and now Ulster. It’s almost like a hand pushing people north.”

Tourism is one of the biggest economic drivers Lloyd is trying to bring back. Glasner shares, “Part of what we’re pushing for is actively meeting the needs of the leisure travelers. We want more bed and breakfasts, a hotel, so that when people come, they can stay right in the area and walk the Rail Trail, ride their bikes, kayak the river, do whatever. There are other breweries and wineries that do events, as well. It all falls under the envelope of agritourism. You can go and pick your own fruits and vegetables. Actually, in the Town of Lloyd, there’s one property that lets you rent your own apple tree. It’s a way to get those who can’t afford to escape and have homes in the country to enjoy some of the same experiences we have.”

There’s a synergy to Lloyd that’s really active, and it’s all part and parcel with the economic contributions of outdoor recreation and tourism, according to Glasner. “And we do have ample parking,” he quips, poking fun at an all-too-familiar New Yorker stereotype.

“Ultimately, we’ve got to take these projects on one at a time, so as to not get overwhelmed or let the growth get out of control,” Pizzuto concludes. “We’d still like to maintain what we think is the character and the life of why folks want to live here in the Town of Lloyd.”

Where: On the shores of the Hudson River, eastern part of Ulster County, NY