Business View Magazine interviews representatives from Moorhead, Minnesota, as part of our focus on best practices of American cities.

Moorhead, Minnesota, a city on the western edge of the state, across the Red River from Fargo, North Dakota, was founded in 1871 and incorporated a decade later. It is named after William G. Moorhead, a Director of the Northern Pacific Railway, whose trains and tracks provided the stimulus for economic and population growth in the area. In its early years, Moorhead served as a transfer point for passengers heading west to claim land under the Homestead Act, as well as goods coming in by oxcart from other parts of the state, which were then loaded onto riverboats for the journey north to Winnipeg, Manitoba on the Red River. 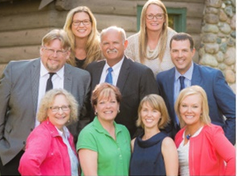 Still primarily an agricultural area, today, Moorhead, with a population of approximately 43,000, is also home to manufacturing and distributing industries, such as the giant sugar beet processing company, American Crystal Sugar. It also still serves as a transfer point, abetted in the modern era, by its proximity to two major highways – Interstate 94, which runs east/west, and Interstate 29, which runs north/south through Fargo – and two airports.

“We’re centrally connected,” affirms Lisa Bode, Moorhead’s Director of Community Development. “We’re an amazing location for a logistics company or a distribution center for that very reason – easy access to several interstates. And we not only have the Fargo airport, Moorhead has its own municipal airport for general aviation, and our industrial park is on the rail line. So when you talk about multi-modal facilities, no matter how it’s coming in or going out, Moorhead is very well situated.”

“We’re blessed in Moorhead that we have a very diversified economy,” adds Cindy Graffeo, Executive Director of the city’s Economic Development Authority. “Everything from agriculture to higher education. We have aviation out at the airport; the health sector is very large in our area; we have a strong manufacturing presence out in our industrial park. So, we’re getting a lot of growth from a lot of different sectors.”

Moorhead is also a city of attractive, welcoming neighborhoods. “It’s a diverse housing stock,” says Dan Mahli, Assistant City Manager. “There are great places where residents can age in place, the children are ‘free-range,’ and access to amenities and services is a short walk away.” “We have standards that every resident should live no more than half a mile away from a park,” adds Bode. “So, when we look at platting our subdivisions and putting developers to work on that, we place a value on that public space and the quality of life no matter where people live in the city. We’re investing in the whole community.”

One way in which Moorhead is investing in its neighborhoods is via a partnership with a major financial institution in the area. “It’s called the Neighborhood Impact Program,” says Bode. “It’s a lending partnership with Gate City Bank. They came to us with an opportunity to develop a loan pool to meet a community need, and we took that opportunity to develop a program targeting our existing neighborhoods. We targeted these very low interest loans to homes that were built before 1990. In one construction season, two million dollars went out the door in 57 loans to local homeowners that ranged from $10,000 to $75,000. They made improvements to their homes that preserve them for the people who live there, as well as for the safety and livability of the entire neighborhood. The median year of built homes that were improved was 1960, and the range was homes built between 1880 and 1989. We’re really pleased at how that turned out. We have a very healthy housing market, yet it’s still a very affordable one; the median home value in Moorhead is $177,000.”

“These are homes that will never be built again,” Mahli explains. “These investments are significant enough so that a lot of this affordable, pre-war housing will last another 50 to 100 years. It’s a great way to preserve our older, affordable housing stock.”

“We also have a strong partnership with our local chapter of Habitat for Humanity,” Bode says. “We work to donate or transfer at least one property lot a year to that organization. And, oftentimes, these are blighted properties that the city clears to make space for new families that ultimately add to the city’s tax base.”

In one recent case, however, Moorhead found itself in the position of not building, but actually deconstructing homes. That happened as a result of the record-breaking floods that submerged parts of Moorhead and Fargo in 2009, 2010, and 2011, when the Red River significantly overran its banks. “After that time, the City Council and the State of Minnesota invested a tremendous amount of resources in acquiring the most vulnerable homes and building flood infrastructure that would help us keep our community in business when river flooding happens – as it inevitably does,” Bode recounts. “Where those 200-plus homes were located, has now been made into greenspace. The most vulnerable homes are gone and we were left with land that could also be a community amenity. We went through a significant planning study in 2014, and since that time, we’ve received over $2 million in parks and trails grants to improve that area along the river. So, we’re turning that disaster into an asset and we think it’s important to the long-term health of the community.”

That sense of creative resiliency – turning flood zone property into a nature-based community asset – also happened to dovetail well with what the city’s residents said they preferred in terms of amenities. “Six or seven years ago, the city did a big community outreach on what they wanted,” recounts City Manager, Christina Volkers. “Our median age here is 29 years old. That’s a young community. They want trails, they want walkability, and they want bike lanes. So, we spent a lot of effort on creating that infrastructure. And we’ve done a great job; we received significant federal and state money and put a lot of effort into trails and parks. Our next wave is downtown development. And we feel like that’s taking off, now.”

Graffeo elaborates on some ongoing projects designed to re-

imagine Moorhead’s downtown. “The city has made a lot of investments into our downtown area to set the stage for the downtown revitalization,” she begins. “Back in the ‘70s, Moorhead was not unique in that we took advantage of urban renewal money and did a lot of renovations during that time period. And what that leads us to, today, is that our downtown area has a lot opportunities. We’ve got some diamonds in the rough – some historical buildings that are ripe for redevelopment that developers are looking at. We have some empty lots, but we also have some big successes currently going on. One of those is The Grove. Moorhead’s downtown area is former industrial, so we do have some contamination issues. But we were able to leverage both state and local resources, and, at the end of the day, we had the most contaminated industrial site in the heart of city now being home to a $12 million, three phase development.

“And, last summer, when the city started some road reconstruction projects, we purchased a gas station on our second busiest intersection. The city took that opportunity to demolish the gas station and redevelop that site, which will soon be home to a $6 million, four-story, mixed-use development with retail on the bottom, office on the second floor, and a modern, two-story loft on the remaining upper two floors. So, those dominoes are starting to fall and, as we get those successes, we have more and more developers who are saying, ‘How many downtowns have empty blocks that are ripe for redevelopment?’ Well, Moorhead has some of those and we consider them an asset.”

In order to spur that downtown development, Moorhead has a variety of incentive programs in place. “We have one of the largest TIF (Tax Increment Financing) Districts in our downtown area,” Graffeo claims. “In addition, we have our Urban Progress Zone, which is a central core of our city that needs an extra little bit of love and attention. Businesses and redevelopment projects can qualify for extended property tax exemptions, above and beyond what are available in the other areas of the city. So, we have a variety of tools in the toolbox.

“And we also have incentives on the residential side,” Bode adds. “We have what we call the ‘Make Moorhead Home Property Tax Rebate.’ Any newly constructed home receives a two-year rebate of property taxes paid – everything except special levies. So, the school district, county, and the city cooperate on that rebate program to help people get into a new home. There’s no maximum value, so if you build your million-dollar home in Moorhead, you get two years of free property taxes, and the community gets the additional growth, long-term. That was a program that we developed as a competitive response because we know that we compete for residents as well as businesses.”

Moorhead is equally serious about its sustainability initiatives. “Moorhead created a new recycling program in July 2017 – single sort recycling,” Volkers reports. “We’ve got about 11,000 homes and 5,000 apartments, and it’s been a huge, huge success for the city.” “We’ve had a curbside recycling program for more than 20 years,” adds Bode, “but in moving to single sort, and making it a little more simple for people and including multi-family apartments, we’ve gone from a collection of about 45 tons a month to over 200 tons a month.” “We’ve got a solar garden and we’ve got a couple of wind turbines,” says Mahli. “We’re aggressively seeking innovative strategies to support national energy independence, and we’re working hard to find energy savings through efficiency.”

Moorhead is also a Minnesota GreenStep City. Minnesota GreenStep Cities is a voluntary challenge, assistance, and recognition program to help cities achieve their sustainability and quality-of-life goals. The program connects cities to resources and technical assistance to complete up to 29 best practices in the areas of buildings and lighting, transportation, land use, environmental management, and community and economic development. “Which means that we are really focusing on all the things that go along with being a green city,” Volkers declares. “That’s a big thing for Moorhead.”

Education is also a “big thing” in Moorhead. Families are attracted to the city because of its active school district and its four major institutions of higher learning: Concordia College, Minnesota State University Moorhead, Minnesota State Community and Technical College, and Rasmussen College, with a combined student enrollment of approximately 14,000. “We educate and retain our workforce, one of the best in the nation,” says Mahli. “They’re innovative and entrepreneurial. We pride ourselves in being kind of a cutting-edge place. The people who built these communities were trailblazers and pioneers and we take a lot of pride in that.”

But perhaps the biggest thing going for Moorhead is its sense of community. Mahli recognizes it in the way the population came together to battle its recent floods. “It shows a lot about their grit,” he avers. “There were over a hundred thousand people in our metro community that came together to build four-and-a-half million sand bags.”

“There is such a sense of community here,” Volkers echoes. “The citizens are so caring and proud, and there are so many good things going on. We’ve got a productive economy, we’ve got education, we’ve got a huge new hospital so the healthcare here is amazing. We have got a welcoming community and a growing population and we’re at a kickoff point for our downtown development. And that is going to be huge. We are very Moorhead proud.”

WHO: Moorhead, Minnesota
WHAT: A city of 42,500
WHERE: on the western edge of the state, across the Red River from Fargo, North Dakota
WEBSITE: www.ci.moorhead.mn.us 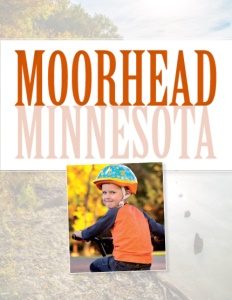