Business View Magazine interviews representatives from PowerON Services, Inc., as part of our focus on best practices in the consumer electronics sector.

Brent Kelley, CEO of PowerON Services, Inc., which he founded in 1994, was still in college when he first began his career of buying and selling computer hardware. As a student rep for both IBM and Apple, he was helping his fellow community college students continually update their computer systems as each new product or technology quickly replaced one that was also once new, only a short time before. At the same time, he was also amassing a cache of older equipment. 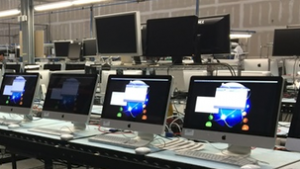 After getting his A.A. degree, he departed for Oregon State, where he says he spent his mornings in the library’s microfiche department, building a database of computer dealers, “writing down every single computer dealer from the Yellow Pages from every single Yellow Pages in the nation,” he recalls. “Then I would call them and get the fax number and start faxing weekly: ‘What do you have? And here’s what I have.’ I could buy and sell anything. That’s really how I started.”

In the beginning, Kelley was buying and selling used equipment, and then, employing his intimate knowledge of industry and product hardware, he began buying excess, new equipment that the manufacturers had and didn’t know what to do with. He, however, was able to find buyers by repositioning components in the marketplace and finding their appropriate niches.

“Each of the companies had their own little nuances,” he recounts. “A company like HP had all these excess monitors – literally tens of thousands of them that were all RGB (Red, Green, Blue). The problem was – their normal market didn’t use RGB; it used VGA (Video Graphics Array). And so, they were just stuck with them. We were able to convert things from one market to another and drive value, where maybe before, they were going to scrap them. Since that time, our focus has been to find the value in the outside channels, or find something that’s going to be scrapped and find a market for it. That’s what we’ve been incredibly good at.”

As PowerON evolved, it began to dive deeper down into its value proposition. “Companies have needs for trade-in value; everybody’s buying and selling,” says Nelly Ramirez, Vice President of New Business. “But there’s more to that trade-in value if you can find a way to make something out of it beyond its immediate economic return. If you can’t sell a device again – whole – then you have to look at the next layer. Then you have to look at the next layer from that component level. Then there’s another layer after that, and that would be the bare metal extraction. Then, you’re really looking at how to economize from the left-over scrap without pulverizing and incinerating it – because that has no value.”

Kelley elaborates on how PowerON’s diverse capabilities help separate it from its competitors: “We have a reuse part of our company and we have the recycling part,” he explains. “Most companies that do recycling are not very good at reusing product; it’s a lot easier for them to scrap it. And a lot of the companies that are into the retail or reuse space are actually very poor at compliance and destructing product that people want destroyed, and they’re very poor at reclaiming parts and pieces. So, we do both sides of that market in order to maximize the value for our customers.” In the past three years, PowerON has diverted nearly 5 million electronic devices from the waste stream. These devices were either properly recycled, or reused and sold at a substantially reduced rate to those who need more affordable technology solutions.

Perhaps the newest level of value, which literally

closes the circle on the product chain, is 360° Recycling. The idea is to leave nothing for the landfill; equipment gets deconstructed down to its most basic components – even reclaiming and recycling the tiny traces of Rare Earth Elements (REEs) and Conflict Metals 3TGs that are critical to the manufacturing of laptops, desktop computers, tablets, and mobile phones. This is an area in which PowerON has moved the needle significantly in the past and continues to do so.

“We have a new technology being developed, right now, that will allow us to even go deeper into these miniscule parts and pieces that you couldn’t take off, before, economically,” says Kelley. “We’re going to be able to do that and start recovering at a very high level. Our company was once the largest destroyer of smartphones in North America; our devices could destroy a smartphone every three seconds – we did a targeted destruction. Now, we’re more of a value reclamation and a recovery company. Not a single piece goes to the landfill.”

For the past dozen years, PowerON has contracted with Environmentalists to build and administer its trade-in programs. Whatever it isn’t authorized to resell, recover, or remarket, it deconstructs and reconfigures into new products. “We have people who can de-manufacture a smartphone in 45 seconds or less,” says Kelley. “That’s the first step. Has it been totally destroyed? No, but it’s in pieces, now. The next step is to identify what the manufacturer will allow us to re-use into other devices. What can we remake this stuff into? Then we’ll go ahead and actually make new stuff. RAM memory can go into thumb drives, batteries can be made into battery packs, Wi-Fi chips can be made into USB Wi-Fi Adaptors. So, we go that next level. We’ve got to the point where we can literally take the chips off a mother board and re-use that. Our next iteration will allow us to take off, not only the chip, but everything on the mother board. So, when we build a program, say for Environmentalists, it’s a no-cost, recycling, recovery program. When we get done, we end up paying the OEM.”

Kelley believes 360° Recycling is going to be a growing revenue generator for PowerON. “For the last 12 years, we have almost been exclusively contracted with one OEM. In the last two years, we’ve been working on expanding the market – Dell and Lenovo. The big thing, going forward, is that we are re-launching Dell’s trading platform, as well as Lenovo’s trading platform. A large percentage of the computer manufacturers will then be utilizing our services. And that gives us a phenomenal platform to expand, and set us up to go after the other main OEMs, because we provide services and innovations that allow us to provide superior services with more transparency and better value for our customers than any of our competitors. I see a tremendous expansion into 360° reclamation. The OEMs don’t know how to do it. Environmentalists has been looking at this for some time, and now the other OEMs are looking at it, and we have a lot of knowledge, there.”

Today, PowerON has one location in the U.S. – Roseville, California, near Sacramento. “This facility has anywhere from 60 to 120 employees, depending on the season and project,” says Kelley. “We have a fully-licensed facility in Amsterdam; and we also have a full-licensed entity in a facility in Hong Kong. We turn them on and turn them off, based upon a customer’s needs. This next year, our main push will be to go ahead and launch in Europe, as well.”

In the world of hardware reuse and recycling, PowerON is charting the course for the entire industry.

Check out this handpicked feature on Value Partners Investments – Taking the fear out of investing.

WHAT: A reuser and recycler of consumer electronic products

iconectiv – Enabling the world of tomorrow,... 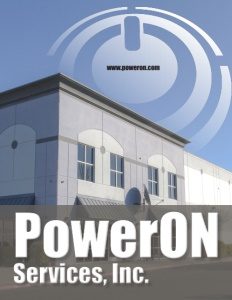