Past IssuesSeptember 2015Supply Chain and Logistics

Everyone agrees that a railroad train needs to run in a straight line in order to achieve its maximum speed, safety, and efficiency; too many curves in the track ahead and the engineer has to slow down or risk jumping the rails and causing a locomotive disaster. And yet, the saga of South Carolina’s Palmetto Railways has more twists and turns in its long history than a bent corkscrew, a Bavarian pretzel, and a giant roller coaster ride, all rolled into one. 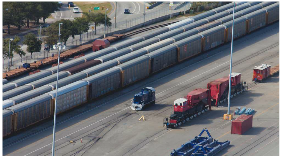 Jeff McWhorter, the President and CEO of today’s Palmetto Railways, picks up the narrative: “We originally started with the Port Utilities Commission of Charleston and the Port Terminal Railroad [two rail lines] which were owned and operated by the Port. In 1969, the Legislature decided to spin off the rail operations from the Port Authority and they created the South Carolina Public Railways Commission. Later, as a part of an economic development effort in the ‘70s, we acquired property and built a 15-mile railroad that we called the East Cooper & Berkeley Railroad that was specifically built for Amoco Chemical Company (now BP Chemical) to locate here in South Carolina. We later built another mile and a half to two miles off of that for Nucor Steel in the early ‘90s.

“Under a restructuring of government that occurred in the early ‘90s, the Commission was abolished and we were rolled into the newly-created Department of Commerce and that’s where we remain, today, as a division of the Department of Commerce. We operated three different railroad companies – East Cooper & Berkeley (ECBR), the Port Utilities Commission of Charleston (PUCC), and the Port Terminal Railroad (PTR), but there was a lot of misunderstanding about who we were and what we did.

“We were thought of as the port railroad, as a regulatory agency, as a passenger railroad, and in our filings with the STB (The U.S. Dept. of Transportation’s Surface Transportation Board) each one of those properties, individually, did not recognize the fact that we were actually operating under the umbrella of the South Carolina Public Railways Commission. So there was some vagueness and ambiguity. In order to clean all that up, and to be identified as an actual freight railroad operating company – and not to distance ourselves too much from being a state entity – we came up with the name, ‘Palmetto Railways,’ and we incorporated all of our operations under the umbrella of Palmetto Railways, and operate them, now, as sub-divisions. Officially, we are South Carolina Department of Commerce, Division of Public Railways doing business as Palmetto Railways.”
Today, Palmetto Railways, according to McWhorter is, “strictly a freight operation which spurs economic development throughout the state. We have a couple of operations within the State port facilities and we handle all the rail switching arrangements for them, but that only represents less than 25 percent of our overall business. Our primary role is terminal yard switching operations and connections to the Class 1 railroads – that’s the value that we provide.”

Under the umbrella of Palmetto Railways,

Palmetto Railways is continuing to experience growth and expansion. It recently made a $3.2 million infrastructure investment at the Port of Charleston’s Columbus Street Terminal. 4300 feet of additional track will help the company handle a proposed increase in BMW’s production output. It is also working on building an intermodal container transfer facility on the site of the former Charleston Naval Complex in North Charleston that will serve the State’s port facilities and have a direct connection to a new marine container terminal that is presently under construction. The new, $200 million facility will serve all of the port locations for the movement of intermodal traffic in and out of Charleston with its access to both Class 1 carriers that serve South Carolina – CSX and Norfolk Southern. “We’re in the middle of the permitting process for the facility and nearing 60 percent completion of the design for the facility,” says McWhorter. “We’ve filed our application with the FRA (Federal Railroad Administration) for a federal railroad rehabilitation infrastructure funding loan, so things are progressing.”

In addition, Volvo Cars is planning to invest a half billion dollars to build a new automobile production facility in upper Berkeley County, and Palmetto Railways will be on hand to provide rail service. McWhorter explains: “One of the requirements is for them to have a rail connection, so being a Division of the Department of Commerce, we’re very involved in that, in trying work through how that connection ultimately happens, and we’ll likely play a role in providing rail switching operations to them. We’ll be working with Volvo, and the Department of Commerce, and with the Class 1 railroads to achieve that.”

As part of South Carolina’s Division of Commerce, Palmetto Railways is tasked with spurring economic development in the state, but McWhorter stresses his company’s chief mandate and its connection with the greater Charleston community: “We see our core competency as providing safe, efficient, rail switching services. We’re local folks; when customers have a problem, they call us and we get things done and make things happen. We always want to make the right call, at the right place, at the right time. The private railroads have shareholders that they’re responsible to. We’re responsible to the taxpayers of South Carolina. And while we’re not appropriated, we are a public entity and the money that we receive for the services that we provide are public monies.”

This past spring, Palmetto Railways was selected as the 2015 Short Line Railroad of the Year by Railway Age magazine. This national competition is held annually and recognizes outstanding achievement in any of the following areas – innovation in operation or maintenance, turnaround situations, consistent excellence, customer service, enhanced productivity, community relations, safety improvement, ingenuity, and dealing with the unexpected.

So, while Palmetto Railways may have achieved this distinction via a long and curvy history, there is no doubt that this South Carolina railroad company is now running fast and true on a very straight and productive track.

WHO: Palmetto Railways
WHAT: A division of the South Carolina Department of Commerce, Palmetto Railways operates three railroad subdivisions
WHERE: Headquarters in Charleston, SC
WEBSITE: www.palmettorailways.com 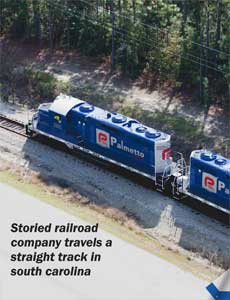