Stillwater Regional Airport – Front door to the community, gateway to the world

Front door to the community, gateway to the world

Business View Magazine interviews representatives from Stillwater Regional Airport, as part of our series on regional, public use airports.

In the early 1920s, the locals of Stillwater, Oklahoma, would pay a small fee to ride in the barnstorming airplanes that utilized the pastures around town as their takeoff and landing strips. By the end of the decade, though, the town had its own real airport, after it received approval to purchase 239 acres of land north of town. Named Searcy Field, in honor of its first manager, George Searcy, a grocery store owner and local aviation enthusiast who was killed in a plane crash in the Lake of the Ozarks, the airport included a half-mile grass strip, a steel hangar, and a 10×10 wooden-framed office.

By the mid 1930s, Searcy Field, led by J. Alvin Guthrie, a former barnstormer, was providing flight instruction for new pilots who also received college credit from nearby Oklahoma Agricultural and Mechanical College (OAMC) for their pursuits. By 1940, with improvements to the airport, the city, led by Mayor M.J. Bradley, Guthrie, and the college, led by President Henry G. Bennett, another aviation enthusiast and a big proponent of air travel, proposed to the federal government that the airport become a primary pilot training school and serve as a feeder program for Randolph Field in San Antonio, Texas. 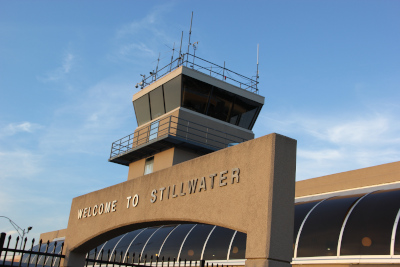 In 1941, Guthrie’s program became a secondary course for civilian pilots, sponsored by the Civil Aeronautics Administration. With World War II raging worldwide, Bennett offered the use of Searcy Field to the armed forces, and military pilot training commenced. The small program started by Guthrie became the 90th College Training Detachment, including 200 students who received 10 hours of basic flight instruction. Many of those pilots went on to advanced Air Force schools around the country. Eventually over 1,500 pilots trained in Stillwater. The U.S. Navy leased Searcy Field beginning in 1942, and for an additional six months following the end of World War II, when the airport became a holding ground for 475 planes that served various purposes in Europe and nationwide.

In December, 1946 the City of Stillwater requested the U.S. Navy terminate its lease with Searcy Field and return it to Stillwater ownership. In 1949, OAMC took charge of the airport at a cost of $1 for a period of twenty five years. When the 25-year lease ended in 1974, a new lease agreement authorized the college to operate the airport for five additional years. In 1977, Searcy Field became Stillwater Municipal Airport, which then became Stillwater Regional Airport in 1999. Today, the Airport is operated by the Stillwater Regional Airport Authority, and its Director is Gary Johnson, who first assumed the post in 1986.

Today, Stillwater Regional Airport functions mainly as a general aviation, military, and corporate airport, serving private pilots and businesses in North-Central Oklahoma. Of the 109 airports across the state, it has been ranked the fourth busiest airport in Oklahoma for the past four years.  “We have approximately 80,000 operations a year,” says Johnson, “with more than 95 percent of that being general aviation and corporate. A large percentage is flight training, but multiple corporations fly in and out to do business here in Stillwater.” Some of those companies include, Special Energy Corporation, SST Software, Armstrong World Industries, Total Energy, Devon Energy, and the Pottawatomie Nation.

In addition to a booming corporate and general aviation market, August 2016 marked a transformational milestone for Stillwater with the launch of American Eagle Airlines service to and from one of the country’s largest hubs, the Dallas-Fort Worth International Airport.  Overnight, this vital link allowed the community to connect to around 1000 destinations in over 150 countries without the hassle of commuting to a larger city. This service was made possible through a partnership with the Stillwater Regional Airport Authority, Visit Stillwater, Oklahoma State University, the Stillwater Chamber of Commerce, and the City of Stillwater. Stillwater’s free parking, short check-in and screening lines, and devotion to customer service is helping to make it the go-to commercial airport for those traveling in and out of North-Central Oklahoma.

Each year, an estimated 20,075 visitors arrive at the airport on general aviation aircraft, and since American Eagle Airlines began its scheduled commercial flights, another 21,112 arrive from the American Airlines hub at Dallas-Ft. Worth. These visitors often spend on lodging, food, retail purchases, ground transportation, and entertainment; annual visitor spending is estimated at $44.1 million. Added to the annual payroll of approximately $26.2 million for the 664 direct and indirect jobs that the airport supports, total annual economic activity generated by Stillwater Regional Airport is just over $70 million a year. In addition, the airport contributes approximately $3.9 million in annual state and local tax revenues.

The airport also continues to support the college, now Oklahoma State University (OSU), in many ways. It is home to the OSU Flight Center, which trains students majoring or minoring in Aerospace Administration and Operations with a concentration in professional pilot. The OSU School of Educational Studies, with an enrollment of approximately 250 students, is located at the airport, and the Mechanical and Aerospace Engineering Department also has its Aerospace Systems Discovery Lab located there. The Lab, a retired American Airlines MD-88, is used for STEM education at the college level as well as for local K-12 students. Occasionally the school also charters flights for its sports teams, and visiting professors, speakers, and parents often use the airport, as well. 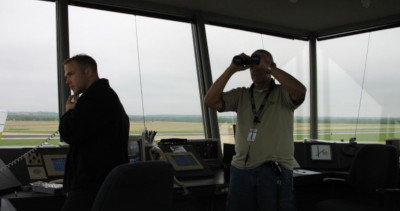 Currently, the airport is in the middle of a three-phase construction project. “We’re finishing up with Phase One,” explains Assistant Airport Director, Paul Priegel. “We’re completing our parallel taxiway to our primary runway, and that’s going to add a lot of efficiencies. Immediately after that, we have a crosswind runway that has been closed for about a year, and we’ll start a rehab project on that. That’s going to increase our capacity, and having that extra runway will be very beneficial for our flight school, which makes up a large proportion of our operations. After that, we’re moving into a full apron reconstruction and expansion. When it comes to large GA corporate aircraft, we’re limited to the areas we can park those large jets. So, that’s going to change; we’ll have a lot more space, which is going to make a huge difference, especially around our OSU home football games. So, construction is in our future, pretty solid, for the next five years, at least.” In addition, the airport is hoping to expand its passenger terminal, as well.

According to Priegel, monies for those capital projects will come mostly from FAA (Federal Aviation Authority) accounts, via its Airport Improvement Program funded through the Airway Trust fund. “It’s distributed back to airports on a competitive basis, by need,” he states. “The parallel project is 90 percent funded with FAA Funds, five percent from the Oklahoma Aeronautics Commission (OAC) and five percent from local funding. Some of the projects will be ten percent local funding and some will be five and five, depending on OAC participation.”

In 2017, Stillwater was recognized as the FAA’s 2017 Oklahoma Airport of the Year, which recognizes airports that have created a positive safety culture, implemented sound and consistent capital planning, supported FAA safety initiatives, and enhanced safety at the airport.  Additionally, Stillwater was also named the 2017 Airport of the Year by the Oklahoma Airport Operators Association (OAOA), and Director Johnson was recognized as the 2017 OAOA Airport Manager of the Year.

Over the last 15 or so years, Johnson says that the airport’s vision has been to be “the front door to the community, and the gateway to the world. And we have accomplished that in many ways,” he declares. “Through our development of the airport and making facilities available that accommodate our business and corporate traffic and, of course, we worked tirelessly to get the commercial airline service so that this airport can really serve the total region that we operate out of – North-Central Oklahoma. The airline service has added so much to the average citizen of the area in that they now can get connected without owning an airplane. So, we’ve become more relevant to everyone.”

Check out this handpicked feature on Telluride Regional Airport – High and safe.

WHAT: A public use city owned airport

WHERE: Payne County, Oklahoma, three miles northwest of the city of Stillwater 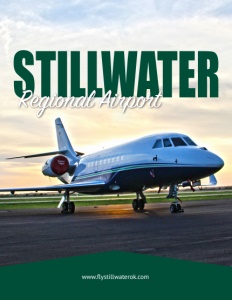