The Telluride Regional Airport (TEX) is a public airport located in southwest Colorado, approximately five miles west of the Town of Telluride. The Airport was built using private and federal funds in the 1980s and opened in 1984. It has the honor of being the highest commercial airport in the United States at 9,070 feet above sea level and boasts over 9,500 operations per year. The Airport is owned and operated by the Telluride Regional Airport Authority (TRAA), governed by a Board of Commissioners, consisting of twelve members who serve four-year terms. The Airport Manager and a complement of twelve airport staff are responsible for its day-to-day operations. 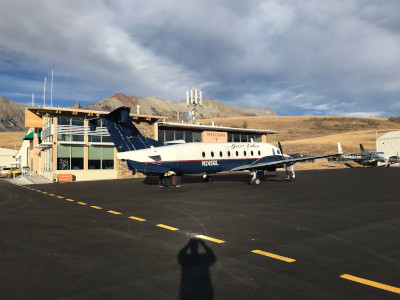 Telluride, itself, is a resort community which is driven economically by tourism. The Airport was built on the premise that the people coming to recreate in Telluride would rather fly to the area instead of drive. This objective was partially intended to help ward off increased vehicle usage and subsequent needs, such as parking, in an effort to maintain the area’s rich environmental culture.

“The airport was conceived from a planning study in the ‘70s by the town of Telluride,” explains Kenny Maenpa, Airport/FBO Manager, “and it is a wonderful example of how all three entities: town of Telluride, town of Mountain Village, and San Miguel County, who is the sponsor of the airport, came together and planned the construction of an airport on Deep Creek Mesa.,”

“It was constructed on land which was formerly a sheep ranch operation,” Maenpa continues, “about five miles west of the town of Telluride. When it opened in 1984, there was immediate interest from the airlines to begin flights to Telluride. We are a world-class ski resort and today there are year-round events. There were originally three airlines flying in and out of the airport with small aircraft – Dash 8s, Dash 7s, and Beech 1900s.”

General aviation was also part of the airport’s growth, and the availability of travel by private and charter aircraft contributed to the development of home ownership in the area. “So, having a quality general aviation airport like Telluride supports those property owners; some are public figures, entertainment, successful business owners, or just people who have the means to own a getaway in the beautiful Colorado San Juan Mountains,” says Maenpa. “Because of our location, which is in the southwest corner of the state, there is a need for transportation, and general aviation is the self-sustaining lifeblood of this Airport. Within ten years of the Airport opening, we became a self-sufficient operation. We are not a busy airport, but the pilots and the users of the airport are very supportive of the Airport and the vision of the Airport Authority.”

Although Telluride Airport is not a large-scale operation, it is constantly working on improvements. “We get a lot of help from the Federal Aviation Administration (FAA), which has been a wonderful partner, and the Colorado Division of Aeronautics,” says Maenpa. “The FAA has done a lot of the heavy lifting in terms of capital improvements over the years. Probably the most notable, in terms of the history of the development of this Airport, was rebuilding the east-west runway.”

Telluride has an interesting history of being a tricky place to land because of what pilots called “The Dip.” Basically, because of the shape of the mesa where it is built, the two ends of the runway were higher than the middle. The result was a concave middle section, making landing similar to swooping down to land on an aircraft carrier. Lamentably, for those who enjoyed the challenge, it has since been re-engineered. “In 2009, the FAA awarded a series discretionary airport improvement grants for several large construction projects that essentially eliminated that dip in the runway and installed the only EMAS system in Colorado,” Maenpa explains. 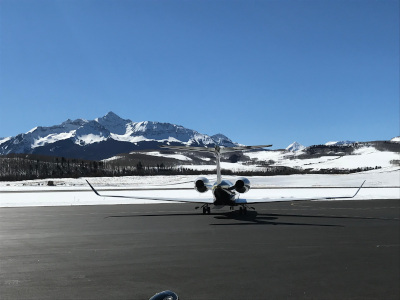 EMAS, short for Engineered Materials Arresting System, is a bed of engineered materials built at the end of a runway to reduce the severity of the consequences of a runway excursion. In other words, there are high energy absorbing materials which will reliably and predictably crush under the weight of an aircraft. The purpose of an EMAS is to stop an aircraft overrun with no human injury and minimal aircraft damage. The aircraft is slowed by the loss of energy required to crush the EMAS material. It is similar in concept to the runaway truck ramp made of gravel or sand.

“Today the runway length is 7,111 x 100 feet with paved shoulders and EMAS systems on both ends,” Maenpa points out with pride, “and along with that, we did a significant airfield project with partial taxiways and the rehabilitation of aircraft parking apron, which was completed last year. Construction seasons are relatively short compared to other climates because we are in a mountainous area and at 9,070’ elevation.”

If Maenpa could point to one factor which goes the furthest in explaining the Airport’s success, it would be a willingness to employ the latest in safety technology. “We have the EMAS system, new RNAV procedures, and we continue to look for ways to enhance our safety. We are one of the few airports that owns a private special approach designed for larger category C aircraft. The Gulfstream 650 and Bombardier Global are the largest aircraft that can fly into the Airport.”

“As we look to the future, we plan to continue to embrace technology enhancing the safety and dependability of flying into an airport located in a mountain environment,” Maenpa reiterates. “That is the number one focus. There are several general aviation manufacturers like Bombardier, Gulfstream, and Honda Jet who have utilized our airport because of our elevation and terrain to test aircraft performance. We are proud to be partners with the general aviation community and pilots enjoy flying into our facility and appreciate our numerous improvements to the airfield and the terminal.”

In terms of facilities, Telluride has one large hangar for transient aircraft storage, twelve other smaller hangars, and the dual-purpose terminal building, that is both the general aviation and a remodeled commercial air carrier terminal, which should be returning to the Airport in December. The Airport Authority has just completed over a million dollars in improvements to the terminal, including a TSA screening area, commercial space, and an additional 7,245 square feet to the general aviation FBO.

“There are convenient alternate airports that are within 1 ½ hours of Telluride if aircraft cannot land here at TEX due to inclement weather. TEX is a priority destination airport because we are just five miles from the towns of Telluride and Mountain Village. We are the leader in customer service and alternate airports are looking to us as we enhance our services to live up to the Telluride brand.”

Our short-term focus is aircraft parking that is in short supply. “During the busy weekends: Presidents Day, Winter Holidays, Telluride Film Festival, and Labor Day, we are packed, and we don’t have a lot of aircraft parking area,” says Maenpa. “This is also especially true during the ski season. We are hopeful that we will be able to begin construction of additional aircraft parking apron and future hangar development on the south side within the next few years.” 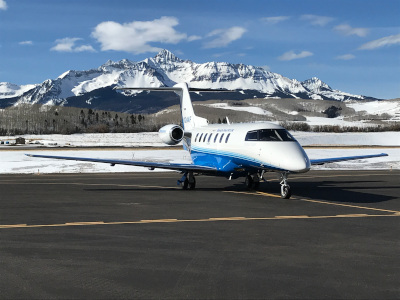 A critical business operation of the Telluride Airport Authority is that it not only manages the Airport, it is also the Fixed-Base Operator (FBO). The Airport provides aircraft services such as fueling, hangar, tie-down, and parking. “That is a really fun part of my business day,” says Maenpa. “Typical airport managers focus on operations and capital improvements. We not only do that, but we also run the heart of the airport operation which is the FBO, providing aircraft services directly to aircraft operators and pilots. We are competitive and fair, making it a great experience for those who use our services. As you can imagine, as a one-runway airport at an elevation of 9,070’, if the wind, weather or visibility are such that they cannot make it to TEX, they will fly to our friends down valley at Montrose Regional Airport, which is a good alternate option and is about 75 minutes away. Currently, all commercial airline passengers fly into Montrose and have good dependable access to the Telluride Ski Resort”.

A unique non-aviation business venture is Telluride Stone quarry, located on the southwest corner of the airport property. “They mine stone called Telluride Gold,” says Maenpa, “which is basically a gold color stone used all over the world for landscaping and building masonry. It is an interesting way to diversify our revenue.”

“But I think,” he continues, “This Airport would not exist without the tremendous support of the Telluride, Mountain Village, and San Miguel County community. When you talk to general aviation pilots, they are proud that they can fly in and out of the Airport. It is surrounded by majestic mountainous terrain and it is not for the beginner pilot. To keep this Airport open and operating takes an extreme amount of effort and many dollars have been invested on enhancing the safety of this airport.”

Check out this handpicked feature on Stillwater Regional Airport – Front door to the community, gateway to the world. 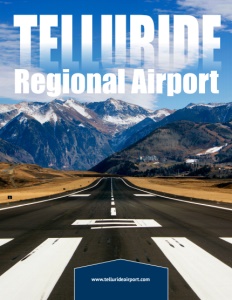