The perfect approach to Chicago

Chicago Executive Airport is a public airport jointly owned by the Village of Wheeling and the City of Prospect Heights, Illinois, located 18 miles northwest of Chicago. With about 80,000 operations annually, Chicago Executive Airport is the fourth busiest airport in the state and specializes in general and corporate aviation. The primary users are private airplane owners, businesses that maintain their aircraft there, major national corporations, and flight schools. The Airport’s 412 acres are home to three FBOs, 325 aircraft, and 57 corporate jets. It has three active runways: 5,001-foot-long Runway 16/34, 4,415-foot-long Runway 12/30, and 3,677-foot-long Runway 6/24.

It was in 1925 that the Airport was born at the corner of Palatine Road and Milwaukee Avenue. It was known as Gauthier’s Flying Field, back in the “barnstormer days,” says Jamie Abbott, the Airport’s Executive Director. The landing strip was purchased one year later by two brothers, Frank and Pete Burchard, who dedicated about 40 acres of their adjacent farm to the facility.

“It was just a large chunk of grass with no real dedicated runways,” says Abbott. “Aircraft could take off and land in any direction according to the wind. The Burchards built hangers, they bought a plane and hired flight instructors, and they opened a fixed-based operator, which is basically a private terminal building. We have three at the Airport today. They did things like fueling airplanes and cars, back then. It was called Palwaukee Service Station because Palwaukee represents the intersection of Palatine Road and Milwaukee Avenue.”

“A group of Lake Forest, Ill., businessmen purchased the Airport in 1928 and began investing money to upgrade it”, says Abbott. For the Century of Progress, held 1933-1934 to mark Chicago’s centennial, they built a hangar for the Goodyear Blimp, which later became owned and operated by two amphibious aircraft providers that provided sightseeing flights. During World War II, the then Palwaukee Airport supported the war effort by taking part in the Federal Civilian Pilot Training Program and creating an active Civil Air Patrol Squadron.

“After the war, the Airport was briefly owned by Oliver Parks, who was expanding his operations outside St. Louis where there’s still a Parks flight training school,” says Abbott. “During that time, Palwaukee expanded to 109 acres, with a gravel runway and about 100 individual T-hangars.”

After being acquired by the Priester Aviation Service in 1953, the privately-owned Airport entered a period of growth. Abbott says the Priester family continued to enhance the field over the next 33 years. “They installed lighting, paved runways, and by 1959, the Airport had four runways. They started to do some navigational improvements – a VOR (VHF Omnidirectional Range) was established in 1961, new corporate hangars, and then the current Runway 1/6 was installed at 5,000 feet, which we are today. In 1967, the FAA commissioned the first air traffic control tower, and some more parallel runways and taxiways. In 1974, the FAA installed the ILS (Instrument Landing System), which is in use today. Back then, the traffic count was about 200,000 take-offs and landings, annually. It was a real bustling airport at that point.”

Prospect Heights and Wheeling purchased the Airport in December, 1986, transforming it into a municipal facility. An inter-governmental agreement was established, which created the Board of Directors that governs the facility. The Board is comprised of three members each from the two municipalities, as well as a chairman.

Abbott explains that becoming a municipal airport opened the door to being able to receive grants from the Federal Aviation Administration and the State of Illinois for capital improvements. “In October, 2006 we changed the name of the Airport from Palwaukee to Chicago Executive Airport to better reflect  our role in the national airspace system, which is corporate aviation, and relieving the Chicago airspace system of corporate and training aircraft from O’Hare (International Airport).”

Chicago Executive Airport is self-sufficient; receiving no tax dollars to fund operations, something Abbott says is a rarity among GA airports. The Airport Managers Office has about 12 full-time employees, but bumps that number up to 14 or 16, seasonally. “It’s a pretty small staff and we do a lot with the staff that we have,” Abbott remarks. “The Airport as a whole, the FBOs and the corporate flight departments, and so forth – I believe they employ about 300 people.”

According to Abbott, Chicago Executive Airport’s chief GA competitors are of the friendly type and both located in the metro area: Waukegan National Airport to the north and, to the west, DuPage Airport. All three serve to complement the entire Chicago aviation system.

“Where we have the advantage of the other two airports is really in our location,” Abbott explains. “We are adjacent to I-294, which is the toll-way that goes around Chicago, with another expressway nearby, and we’re only 20 miles, as the crow flies, from the Loop in downtown Chicago. So, if you’re doing business on the north side of Chicago or downtown, it really is the GA airport of choice for people coming to Chicago for business. Waukegan is a little far north and DuPage is far west. They both have longer runways, but nobody can beat our location close to the North Shore and downtown.”

Chicago Executive Airport management is in the midst of planning for the aviation requirements of the ever- evolving flight industry. Revision of the roughly 30-year-old Master Plan has been underway for several years and is now in its final phase.

“Now, we’re going to start looking at alternative infrastructure configurations at the Airport,” says Abbott. “So, we take the forecasts and the facility requirements for what’s going to be required for aircraft over the next 20 to 30 years and we start looking at infrastructure. We start looking at ramps and building new hangars and runway configurations. Do we need to reconfigure runways? Do we need to lengthen a runway to stay relevant to business aviation? 5,000 feet is really the minimum for business aviation; it’s 5,000 feet or greater.

“So, we’re going to be looking at all that. It’s really a comprehensive effort involving the communities and the public,” he adds. “We’re going to ramp up the public involvement piece. It’s going to take a year, a year and a half to get this done. But it’s really the last push and the end result of this master plan will be an updated airport layout plan that really will give us a picture on paper of what this Airport should look like in the next 20 to 30 years. That’s something we’re pretty excited to continue and get wrapped up.”

A second major project is also on the drawing board: constructing a new Customs building because the current facility doesn’t meet U.S. Customs Border Patrol standards. Abbott says the Airport handles about 500 customs operations per year, which is more than the other reliever airports in the area, combined. “We’ve hired an architect and a construction manager,” he notes.  “They’re working on narrowing down a facility location and a floor plan, and we’re pretty close on finalizing where it should go and what it should look like. And we anticipate construction of a new U.S. Customs facility in the spring, so that’s pretty exciting.”

The Airport is funding the Master Plan updates at a cost of nearly $2 million. Abbott says the expenditure is eligible for reimbursement by the FAA and the state. “We have submitted that on our capital improvement program to the state,” he explains. “Once we complete the study, and we do a project that is in association with the study, the FAA and the state will consider reimbursing us up to 95 percent of the cost of the study. As for the U.S. Customs building, it’s totally on the Airport to pay for that facility. That means us partnering with private companies, because there are no FAA or state dollars that will go into that facility. They will participate in a new ramp and some infrastructure, but the building itself, it’s totally up to the Airport to pay for.”

George Sakas, Chicago Executive Airport’s Director of Economic Development, explains that the Master Plan will address possibly creating other facilities at the airport, such as lodgings, a restaurant, and office space. There is a hotel with a restaurant and office building that borders Airport property, but those buildings are dated, he says.

“We might be looking for some redevelopment of that; looking towards maximizing not just the airplane operations, but also the businesses on the Airport and then businesses that are complementary to airport, outside the gate and across the street,” Sakas states. “Every airport has a mix of multiplier businesses. We have detailers, gas stations, hotels, restaurants, and a number of businesses that cater to the Airport.  We need to, and we want to, grow that to its organic limit.”

Helping to foster interest in aviation and aviation careers is also a focal point, says Sakas. Chicago Executive Airport recently formed a cooperative relationship with an area school district that will create a class to enable high school students to get exposure to the field of aircraft mechanics. The arrangement is a first for the Airport. “There are lots of other events that go on to try and get young people involved,” he adds. “We have an active chapter of the Young Eagles program, which is organized by the Experimental Aircraft Organization up in Oshkosh, Wisconsin. Our local chapter takes hundreds and hundreds of kids for their first airplane ride every year. And again, those are focused on giving young people a glimpse of what the industry is like. There are certainly other charitable events that go on during the year that the Airport is supporting or the local FBOs are supporting. There’s a big one at Christmas time and other special events. We support a scholarship program called Dollars for Scholars that awarded $37,500 to 15 recipients in 2018. “I think it’s important to say that we’re more than just a place where airplanes land and take off and pick-up fuel.”

Check out this handpicked feature on St. Louis Downtown Airport – A premier option.

WHAT: A public airport jointly owned by the Village of Wheeling and the City of Prospect Heights

WHERE: 18 miles northwest of Chicago, in suburban Wheeling, Illinois 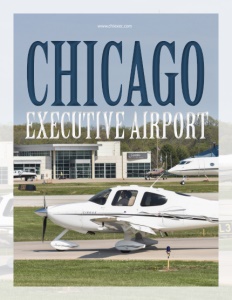