Everyone trusts the original

Meyco Products Inc. is the parent company of Meyco Pool Covers and TopTec Event Tents – two different divisions with many similarities. It’s an entertaining legacy of growth and innovation that hails back to the late 19th century; a firm that found its “modern day” footing in the 1950s, and currently reigns as an industry-leading manufacturer in the Pool & Spa sector. As its tagline professes, “Everyone trusts the original.”

The company had its beginnings in 1898, when Fred Meyer started manufacturing flags and awnings. Later, his son, Fred Meyer Jr., joined his father and the focus moved to residential exterior awnings. One day in the late 1950s, Fred Jr. was opening his swimming pool and found a dead skunk in the pool, his service company, a prominent pool builder in CT., asked, “Can’t you come up with a better cover to make this cleaner and easier with all that you know about awnings?” That motivational nudge inspired Fred Jr. to start working on a little project. Being in the fabrics industry already, he tinkered with the idea of a cover that could be tensioned out over the pool and allow the water to drain. At the time, the biggest issue was the collection of water and debris on the tarp cover. He devised a couple of prototypes and, in 1957, patented the first design of the winter pool cover which was to be anchored into the surrounding deck for maximum strength.

Fred Meyer and Son would start to become known as Meyco, which was based in Long Island, New York and a second plant was opened in the late 1980s in Spartanburg, South Carolina. At that time, much of the textile business was leaving South Carolina and going overseas, leaving experienced sewing machine operators jobless. So, Meyco came to Spartanburg and offered a first shift; a fairly high-paying job compared to what they had been earning – a win-win for the company and the workers. Today, 99 percent of the covers are manufactured there. All the design work is done at Meyco’s New York headquarters, along with repairs and alterations, and some manufacturing of pool covers. Even when other companies make the product, the design is still Fred Jr.’s original creation with the crisscross straps, the hardware, and the anchoring system. It’s no longer proprietary – patents ran out a long time ago – but the design has lasted for decades and continues to be the most widely used and more popular cover design around the world.

John Ciniglio started with the company in October 1998 and has been Owner and President of Meyco Products and TopTec Products since 2005. He recalls, “Back in the ‘60s, ‘70s, ‘80s, a pool cover would take 16 to 18 weeks to make and ship, so in January we’d still be filling orders from October. But as competition came onto the scene and manufacturing processes advanced, the season became much more compressed. Today, approximately 90 percent of our covers are custom designed and made to order and are shipped in about 2 weeks during a very seasonal peak time. And by seasonal, I mean 80 percent of our business is done in August, September, and October.”

Around 2005, a dramatic change in the real estate sector resulted in a decline in the pool building market. Meyco anticipated the difficulty of having a seasonal business, solely, in pool covers and realized the need to diversify. Ciniglio explains, “That was when we came across TopTec – an event tent manufacturer in Laurens, South Carolina. The company was growing but struggling financially because of the capital-intensive requirements for making large event tents. So, we took it over with the intention of investing in inventory and using our labor on both sides of the business to help increase productivity and level out the company seasonality. We finalized the purchase of TopTec assets in 2006, and brought it into the Meyco family, running as two separate divisions: Meyco Products (pool covers) and TopTec (event tents). In 2011, we combined our Spartanburg plant and another in Laurens into a 150,000-sq.-ft. location in Moore, SC. We run them as two separate brands, with separate sales teams and customer service response teams, but operationally, they are very similar. It’s a cut-and-sew product. We felt that was the best way to incorporate the synergies and it’s worked out really well.” 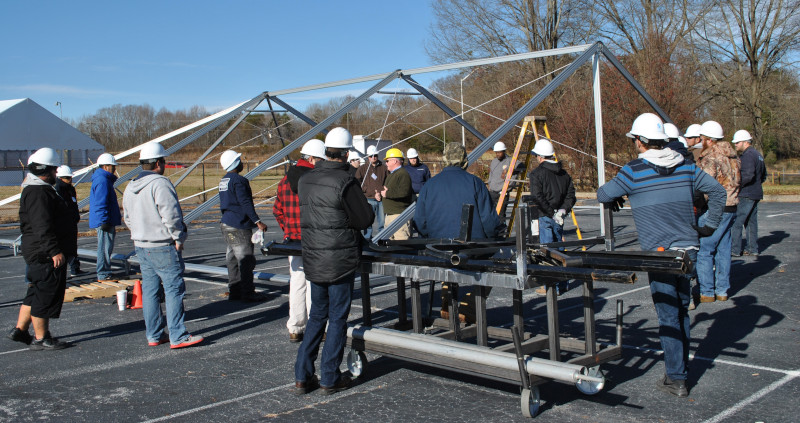 Meyco Products, Inc. has a total production workforce of about 150 employees but fluctuates throughout the year, with seasonal spikes and lows. In the case of pool covers, the company sells to a pool professional. It could be a builder, or service company, or other pool business who resells to a customer. While not having direct interaction with the end user, Meyco does a lot of Dealer Direct business. The other portion is through distribution, where the customer sells to another pool professional, who sells to the end user. “We manufacture manual safety covers (not automatic retractable) that are installed around the decking of a pool with brass anchors and a spring that holds the crisscross webbing,” says Ciniglio. “The customer sends in measurements, or we measure the pool for them. We’ll design the cover from the measurements, and if they provide photographs, we use those to help us come up with the design.”

Competition is strong. In many cases, pool covers became a secondary business for manufacturers of pool liners. Companies already knew the size and shape from the liners, so moving into pool covers was the next logical step, as an add-on. Where Meyco differs is in the design. Ciniglio notes, “We put our efforts into custom applications – raised areas, rocks, walls. We just made a 40,000-sq.-ft. commercial pool cover made in nine pieces that was part of a giant lazy river. That’s the kind of design work we excel at We did things with that project we’ve never done before. Or sometimes the customer has constraints they need to work around in order to get a cover installed, and we’re usually able to create a design that accommodates those parameters. We put a lot of extra time and attention into higher end customization of the covers. Our people hand sew everything on an industrial sewing machine. We’ve always stayed away from automated machinery for the stitch work. It allows us to use thicker thread and you see something different when you’re looking at a hand-crafted product versus a cookie-cutter job. We have the automated machinery, and we use it for other applications, but not on our pool covers.”

TopTec, on the other hand, manufactures mainly standard products. The SKUs are established in a catalogue and the customers choose the one they want. On occasion, the tent will be customized to accommodate a different pitch, or cutting around a certain area, or include print work. That reflects about 10 percent of the business. There is a seasonal push in the spring, from March to May, and supplying that demand requires inventory. TopTec invests well to have stock available, and if product does have to be made, it only takes one to two weeks.

Event Tents are not all about fun and games; there is a serious aspect to the business. As Ciniglio reports, “We put on a Tent School at our facility, usually in December. With tents, the industry and insurance companies are very aware of the importance of safety. Teaching companies how to properly put up a tent, and the proper safety protocols, are vital from a safety standpoint, and just for managing your business. The efficiency of having a crew that understands the order in which it’s put up, or what to look out for at a jobsite, leads to a profitable and successful company. These are hard to demonstrate in a brochure or in a meeting at someone’s site. We’ve run Tent School longer than anyone in the industry and have companies from all over the country participating. It’s usually a three-day event where we touch on different methodologies for putting up frame tents and tension tents. It’s a great to way to share information, network, and learn something new.” The majority of TopTec customers are event planners, party planners, or rental companies. When they purchase a tent, they put it in inventory, typically for a wedding, or other large event. These companies are experts at installation and taking the tent down after an event. 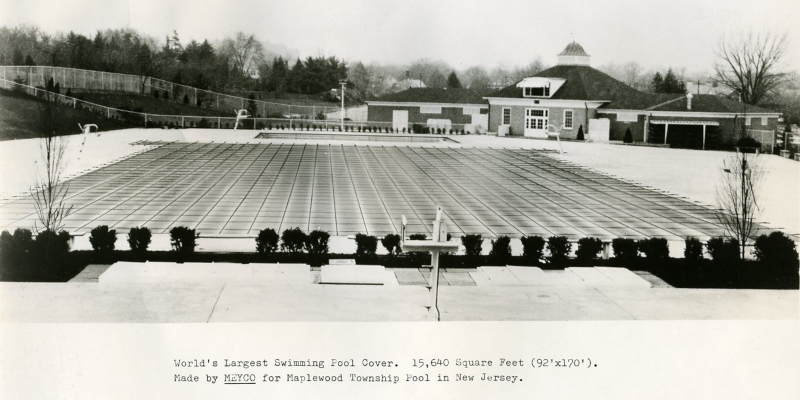 First Commercial Cover in the 1960s

Having a good banking relationship is very important for a seasonal business. Managing cash flow becomes that much more important; you need a good line of credit in place, and someone who understands the seasonal nature. Ciniglio admits that Meyco’s financial picture looks very different in March than at the end of September. In that regard, he credits Bridge Hampton National Bank on Long Island as being “very good to us since we switched to them during the recession in 2008.”

Looking ahead, Ciniglio says, “The pool cover and event tent industries are both mature – diluted with different levels of competition. You’re going to see consolidation in both, as companies evolve. We’ll see more technology. From my customers’ standpoint, tents are a very labor-intensive business; if tech can help them out, they would have a lot to gain – certainly, on the pool cover side, as well, just not necessarily to the same extent in the way of inventory management, handling of product back and forth, and labor. Different technology could be used to make that better. I see growth in our existing businesses, and opportunities outside of our current customer base that play to our strengths as a manufacturer. The design of custom products is our strong suit and having other customer channels is something I definitely see in our future.”

What: Designer/manufacturer of safety pool covers and custom event tents 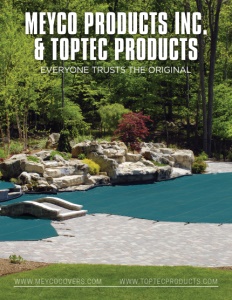