Business View Magazine interviews representatives from Auburn, IN, as part of our focus on best practices of American cities.

“I’ve often said I’m a mayor of a city that celebrates our past, lives in the present, and prepares for the future.” The mayor in question, quoted above, is Norman Yoder; the city he has led since 2000 is Auburn, Indiana, the county seat of DeKalb County, in the northeast corner of the state. Auburn, which lies about 20 miles north of Fort Wayne, was founded by Wesley Park in 1836 at the intersection of two major routes going west, Goshen-Defiance Road and Coldwater Road. Legend has it that the name of the community came from “The Deserted Village” a poem by Oliver Goldsmith that begins: “Sweet Auburn, loveliest village of the plain, Where health and plenty cheared the labouring swain.” 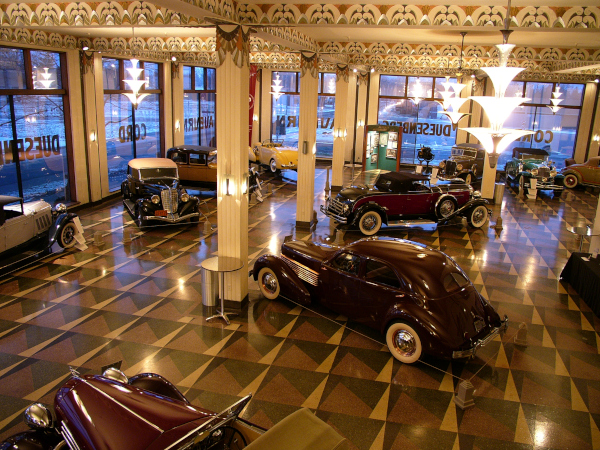 Today, this city of 13,000 is both a bedroom community of Fort Wayne, as well as vibrant manufacturing town whose history is rooted in the automobile industry of the early 20th century. The Auburn Automobile Company produced its first car there in 1903, and the Auburn Rubber Company, which started in 1913, was a major tire producer, and then a manufacturer of rubber toys. And although the Auburn Automobile Company closed in the late 1930s, the city still celebrates those glory days each Labor Day weekend with the Auburn Cord Duesenberg Festival at the Auburn Cord Duesenberg Automobile Museum, once the building where those cars were hand-assembled , and which was added to the National Register of Historic Places in 2005.

But Auburn is a town that doesn’t just look backwards; the city lives in the present and Mayor Yoder reveals that there’s “a lot going on.” One current project is the Heron Lake development, a modern, innovative, multi-use subdivision at the south end of town with easy access to I-69 and Fort Wayne. The 300-acre, planned community is being constructed on land that was first used by gravel operators in the 1920s who extracted about three quarters of what eventually became Heron Lake. When complete, the new subdivision will contain 200 residential units, including townhouses, single-family homes, and loft housing located above commercial establishments, a boutique winery, a hotel, and other small retail and service businesses. In the middle of the development will be a 100-acre private lake, with an island that will have manicured park space and a pavilion that can accommodate as many as 400 people. “I don’t believe there’s anything like it in the state,” Yoder claims.

Downtown Auburn is also experiencing a surge of redevelopment. “Downtown was built back in the 1800s, and a lot of buildings go back to the turn of the last century,” Yoder reports. And like many older downtowns, he says that Auburn struggled during much of the last century, as big box stores in the suburbs replaced downtown business. Happily, in 2015, local investors, Rick and Vicki James, purchased the old Auburn City Hardware store, a fixture in the community since 1859, and reopened the building as the Auburn City Steakhouse. The James family, which owns Metal Technologies, Inc., also runs the James Foundation and restores historic buildings like the hardware store, giving Auburn’s past a place in its future. Along with Jeremiah’s Brewed Awakenings Coffee Shop and The Deli at Sixth & Main, the Auburn City Steakhouse is their latest project. 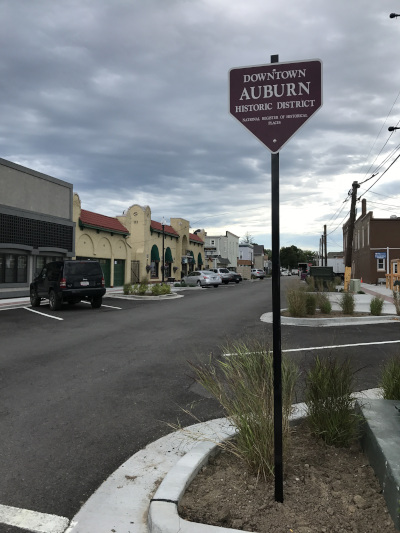 The City did its part by completing a $1.3 million dollar downtown streetscape upgrade, which Yoder says encouraged another group of area business owners to want to join the revitalization effort. “So, we did another block in partnership with them – new sidewalks, new lighting, burying utility poles – to bring it into the 21st century,” he states. “This struck a chord of pride within the community, and they’re looking to the future and not just complaining about the past.”

Another local business, Team Quality Services, has plans to build a new, 15,000-sq.-ft. building on the footprint of an older downtown building that’s beyond restoration because the materials of which it was built have deteriorated beyond the point of saving. “They’re going to locate their employees on the second floor and open up a possible restaurant or retail or office space on the first floor and bring that vitality into downtown,” says Yoder.

But living in the present is only part of Yoder’s governing paradigm, and as the Mayor previously stated, preparing for the future is also high on his agenda. “I’ve always approached government as a provider of services,” he states. “We’re just a large service business for the constituents who elected me to office. The quality of service has always been utmost, so how do we do that in the most economical and efficient way? Well, in the 1860s, if you had a railroad, you had an advantage over everybody else that didn’t,” he explains. “At the turn of the 20th century, if you had electricity, you had an advantage over those communities that were late to the game. In the 1950s, if you had an Interstate that was close to your community, you had an advantage over those communities that didn’t. And, in the 21st century, it’s fiber.”

Since 1985, the City has used optical fiber to provide high-speed communications and manage the electrical grid of its service territory. In 1998, Auburn developed and implemented a Municipal Area Broadband Network, which tied over 28 government facilities together on a common platform to share voice, data, and software in a collaborative manner. “As time went on,” says Yoder, “we talked about how fiber was going to be the future, and it became obvious around 2002-03 that connectivity with fiber was going to be necessary to have a community where people wanted to live, work, play, and retire, and that communication is of the essence if we’re going to keep our manufacturing base. So, if we’re going to keep a quality place to live, it was necessary to have a scalable, reliable fiber system.”

Yoder recounts that a local business, Cooper Standard, a leading supplier of systems and components for the automotive industry, had apprised the former city administration that it was going to have to leave town because it needed a more robust connection to the internet for its data center. “At that time, the incumbents were uncooperative in providing that,” he remembers. “But, we solved Cooper Standard’s problem in 2004, and then we slowly expanded and built it out over the next seven years. Eventually fiber spread, connecting every home and every business within the City of Auburn. Now it’s a robust system; we’ve got 1 gigabit connectivity available to every connected home and business subscriber, with 10 and 100 gigabit capability throughout for future growth. At the same time, we took that platform to do automatic meter reading and management of the electric system. This year, we’re going to do the same thing with the meter reading of the water. So, we’ve got a platform of fiber to homes and businesses, but also a more efficient management of our utilities, so we can do a better job of providing quality service to our customers.” 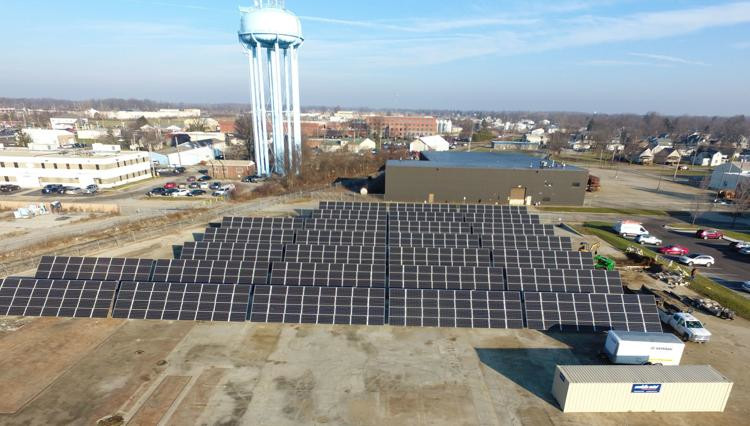 Auburn Essential Services (AES) is the community-owned and operated network that offers high-speed internet, television, point-to-point (private) data, voice, and data center co-location services to businesses and residential neighborhoods in Auburn. AES and its fiber-based infrastructure provide many progressive services to the community—ultimately improving the economic development and quality of life in Auburn. “That’s the way our community has always been – very progressive. And I’m very proud of that,” says Yoder.

“This past year, we experienced our largest growth in our history,” notes Chris Schweitzer, General Manager of AES, adding, “What’s also unique is some of the partnerships we have. We’ve partnered with a neighboring municipal government – the City of Garrett. Those folks had, like us, first elected to deploy fiber to their businesses, and we partnered with them to light that fiber up and be the service organization to provide alternative broadband, voice, and data services for them. Now, they’re in the process of planning and deploying the rest of their system, like we did a couple of years ago, for fiber in the homes. So, our footprint is collaboratively growing with a neighboring community, providing great choice and options for residents and businesses here in DeKalb County.”

Jason Sweitzer is the President of Tempus Technologies, a local company in the integrated credit card processing industry. According to Yoder, AES is one of the services that Sweitzer cites as making it possible, not only to stay in Auburn, but to grow his business, as well. “He’s often said, if it weren’t for Auburn Essential Services, he probably wouldn’t have stayed in Auburn because he wouldn’t have gotten that scalability on the internet and the reliability that he needed in order to do his business,” Yoder avers. “He’s been a great advocate of ours and we’ve been a great advocate of his.”

“It’s an interesting company that’s an innovator in its industry and a major supporter of Auburn Essential Services,” adds Schweitzer. “They just relocated; they took over an older, vacant building and redeveloped it. They also just purchased an additional brownfield site and are looking to create some really great things there. They worked with the municipal electric utility, Auburn Electric, to come up with a custom solution that benefits them and ties into our grid; the first phase is some renewable energy with a solar array. They’re a wonderful corporate citizen that calls Auburn home.”

With its community-owned fiber optic infrastructure, one of the state’s lowest municipal residential electric rates, extensive manufacturing and transportation networks, a strong workforce, innovative and committed entrepreneurs, and a central Midwest location, Yoder believes that Auburn is a great place to establish a business. “It’s also a great place to grow up, to live, work, play, and retire. And,” he adds, “we’ve got a world-class museum that’s a national landmark. It’s the only automobile museum that has that designation.”

WHERE: Northeast Indiana, about 20 miles north of Fort Wayne

A certified woman-owned business, Links Creative Alliance is comprised of a multi-disciplined team that leverages the art of collaboration and the science of strategy. The result is immersive experiences that help our clients make meaningful connections with their stakeholders—connections that create culture, communicate quality of place and influence outcomes. 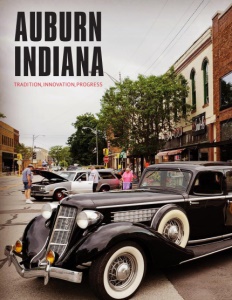