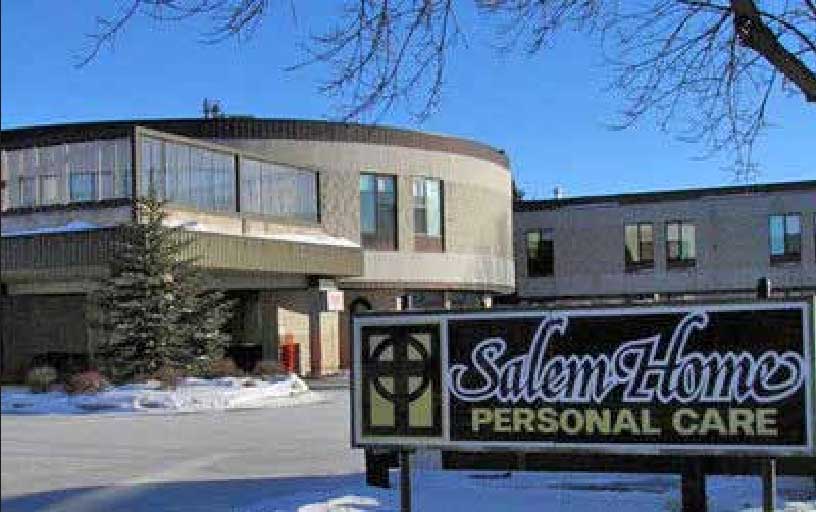 Salem Home is the largest personal care home (PCH) in rural Manitoba. It is owned by 13 Mennonite congregations within the town of Winkler and the nearby region. Its 290-member staff serves level three and four, maximum-care residents who require assistance with the activities of daily living, including help with meals, medication, ambulation, getting up and going to bed, etc.
Sherry Janzen is Salem Home’s Chief Executive Officer. She recounts the facility’s beginnings: “Salem Home opened its doors in 1956, in response to the Winkler and surrounding area not having a place for the elderly to go when they needed care or they were no longer able to live by themselves. The first build was 59 beds and then three years later they added more beds, and it’s been growing since then. Today we are at 145 beds – our last addition was in 2001.”

Salem Home’s service to all of its residents is based on a Relationship-Centered-Care model. Relationship-centered care is provided in the following specialized environments: Personal Care, Special Needs or Alzheimer’s/Dementia Care, Young Residents, Behavioral Treatment, and Respite Care.

Kelly Ens, the Home’s Resource Development Coordinator, talks about the staff’s focus: “Here at Salem, we really focus on the relationships. Some of our residents could live here upwards of 20 to 30 years. (35 of the Home’s residents are between the ages of 35 and 74). If you walk into our doors, it is simply not just a place of palliative care, or a place to die, although you do come here to live until the last of your days. And so we want residents to find meaning and purpose and a place where they feel safe and secure and that they want to live out the last of their days, however long that seems to be.”

Janzen adds: “Our philosophy is, and has been for the last 25 years, is that residents come here because of their disease process, not because they’re old. And that makes a really big difference when you start providing care because it’s not about the aging; we’re not just dealing with old people.”

In order to provide the best in relationship-centered care, Salem Home has adopted – and is the only PCH in all of North America to implement – the QUIS measurement tool. Originating in the United Kingdom, QUIS evaluates resident care based on a process of observation and assessment. The evaluation process occurs over a total block of approximately 11 hours. The 11 hours are broken down into 5 minute intervals of observation. During the observation period, an assessor will note everything he or she sees, hears, smells, or feels, with specific notation made to any interaction or conversation between a resident and others. Following the observation, the assessor grades the 5-minute blocks of time into one of the following categories: positive social care, positive personal care, neutral care, negative protective/controlling care, and negative restrictive care. The ultimate aim is to have only positive care provided to residents.

Jake Wiebe, Salem Home’s Finance Officer, details how the QUIS model became integral to Salem Home’s care paradigm: “This goes back a couple of years when we attended a leadership summit,” he relates. “The point in the summit was: ‘To speak for those who cannot speak for themselves.’ We can’t wait for the residents to tell us what they need because many times they’re unable to verbalize or communicate their needs to us. We do the measuring, using the QUIS tool to measure what the resident is actually experiencing. And those measurements drive our decisions.”

Janzen elaborates: “The QUIS is becoming our road map on what we’re doing, how we approach care, and what kind of education the staff needs. We literally measure what we do. When we make changes, we’re not just making changes because we think it’s a good idea. There is a process in place that determines what kind of interactions and what kind of an actual, lived experience a resident has. It’s not what we think it is, but what the resident’s actual experience is. And that really changes how we look at things and what we will do next. Through the results of the evaluation, we have made physical changes to our building, attempted to make the atmosphere more home-like, and offered education to our staff on how to best care for residents affected with dementia – focusing activities on building upon strengths that remain, not focusing on what can no longer be done.”

Janzen gives another example of how Salem Home responds to

the needs and desires of residents. In 2013, its annual, Resident Satisfaction Survey indicated that people were unhappy about the food. In fact, the satisfaction ratio measured only 80 percent. “So we started looking at what we could do differently with the meals,” she says. “And we came across a model where you can offer residents a choice where they could see and smell the food before it is served, so they can determine what it is they want to eat. So we trialed that. The food hadn’t changed – the only thing that changed was that the residents were given a choice. And the next survey came in at 94 percent.” But since the cooks’ themselves were the ones who served the meals, the Home’s administration now needed to figure out a way to give them more time to serve, without sacrificing cooking quality. The solution was to buy a “Rational Cooking Center,” a computerized cooking unit, used in restaurants and institutions, that replaces seven pieces of kitchen equipment. The unit worked so well, that the Home now has two!

In addition to its personal care sector, Salem Home is one of only two personal care homes in Manitoba with a Behavior Treatment Unit (BTU), a specifically designed unit and program for those having difficulty adapting in a normal care environment. Janzen explains: “Residents who have responsive behaviors – aggression, sexually inappropriateness, etc. – who cannot relate to a PCH environment, have a special unit with a Geriatric Psychiatrist, a Geriatrician, a Psychologist, and Psychiatric Nurses, who will determine what the triggers for the behaviors are, wean them off of any current medications which might be causing the behaviors, and develop a care plan so that the triggers aren’t part of it.” The Behavior Treatment Unit also has an Outreach Program that provides support and assistance to other facilities throughout Regional Health Authority, Southern Health-Santé Sud, and beyond. The Home’s BTU has been recognized as a Best Practice by Accreditation Canada for having met nationally-developed organizational and care standards.

Like all personal care homes in the province, Salem Home’s basic funding comes from the Provincial Department of Manitoba Health, as well as from a small per diem paid by the residents, based on their income. Additional funds are raised by the Salem Foundation, a charitable organization founded by ten Anabaptist Churches of Winkler, Manitoba, which is involved in numerous projects that make a significant difference in the lives of the Home’s residents. To date, the Foundation had brought in close to $5 million. Over the years, these contributions have provided: the implementation of electronic health records; the purchase of properties with Salem Home for future development; blanket warming units for each of the Home’s five “neighborhoods;” permanent ceiling lifts for resident suites; staff training in QUIS-EH-O for enhanced resident care; construction of multi-purpose room; duet bicycles for residents and the two Rational Cooking Centers.

Salem Home’s long waiting list, which far out-strips any of the other regional facilities, is a testament to its high level of care and attention to its residents’ needs. Jake Wiebe sums up the Home’s guiding philosophy: “We stress to our staff that we are working in the residents’ home, rather than the residents are living in our facility, and there’s a huge difference between those two. When you work in someone’s home, their needs, their concerns are a priority.” And that attitude is what makes Salem Home one of the most forward-thinking and innovative, personal care homes in the region. 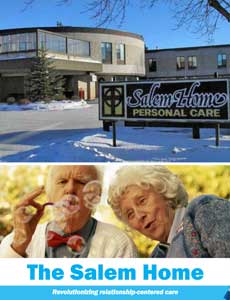