Enhancing quality of life for frail seniors in southeastern Ontario

Providence Manor is a long-term care home located in the heart of downtown, Kingston, Ontario. It was founded by the Sisters of Providence of St. Vincent de Paul, who- according to their Mission statement-is an apostolic congregation of vowed women religious who are called upon to be “channels of God’s Providence.” “A heart consecrated to charity,” is the Sisters’ motto. 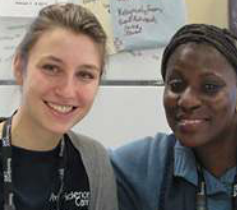 Shelagh Nowlan, Providence Manor’s Vice-President of Long-term Care, describes how the Manor was established 150 years ago. “The Sisters arrived in Kingston to begin their mission of caring for the vulnerable in our society in Kingston, and they started their ministry here at Providence Manor. Today, Providence Manor is a 243-bed, faith-based, long-term care home. We are part of a larger organization called Providence Care, which also operates two hospitals and several community services focused on enhancing quality of life. Following in the footsteps of the Sisters, we have been in this business since 1861.”

According to Nowlan, “The Sisters worked in the prisons , in the orphanages, with people with disabilities and the vulnerable elderly. They used to go around the city and area to collect donations to feed people.” In fact, within days of their arrival in Kingston from Montreal, the original four Sisters had already taken orphans into their care, visited sick people in their homes and soon began to visit female convicts in the penitentiary. The Sisters’ first home and “House of Providence” was at the corner of Ordnance and Montreal Streets. Ten years after their arrival, their successors began work expanding the House of Providence to provide more space for the ill, elderly and orphans.

Over the following years, many new additions were made to the Home. Today, the first House of Providence is known as Providence Manor and provides end-of-life care, and long-term care. Residents come to live at Providence Manor after being assessed by their local CCAC (Community Care Access Centre).

Nowlan describes Providence Manor and its typical residents: “The average age of our resident population is 87 years. We have two “short-stay,” or “respite” beds-which means people from the community whose caregivers need relief can come into our Home for up to 90 days a year. Eighty-percent of our people living at Providence Manor are female; seventy-five-percent of the residents have moderate to severe cognitive impairment. Many require assistive devices like wheelchairs, assistance with bathing, and mechanical lifts to help them in and out of bed.”

Regina Mitchell is Providence Manor’s Director of Care. She elaborates upon Nowlan’s depiction: “At times we also do see younger residents coming to the Home – individuals who are younger than the age of 65. This is becoming a lot more common. These individuals require care and a place to live often as a result of an acquired brain injury. One of the changes we are starting to notice, especially in the last five years, is the increased level of care needs of the residents coming into the Home. Because of their increased care needs, our staff requires more skills to help residents with complicated behavioral needs. Nowlan adds, “The changing face of long-term care is dramatic. A couple of years ago, we had a resident who had lived here for 40 years, pass away. That’s not happening, anymore. The average length of stay, now, is about two years. People come in — often at the end of their life and are staying for a much shorter period of time.”

Because the care for the vulnerable elderly has become more complex, Nowlan relates that the Manor has recently joined a program called “Behavioral Supports Ontario,” a $40 million provincial investment in partnership with all Ontario Local Health Integration Networks (LHINs), designed to enhance healthcare services for older Ontarians who are at risk of- or experiencing- “responsive” behaviors. (Responsive behaviors may include wandering, aggression, resistance, or many other types of behaviors occurring as a result of an unmet need or desire that can no longer be communicated by the individual – such as pain, confusion within their environment, or other social triggers.)
“So now, Providence Care has a team of 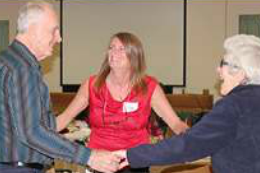 specialized staff that is focused specifically on the behaviors associated with people who have cognitive impairment,” she says. “It’s a group with additional training and experience that is available to all long-term care homes in the region- including Providence Manor- and who can provide suggestions and recommendations on how to manage responsive behaviors that we see in people living with cognitive impairment. In addition, Providence Manor itself has established a responsive behavior team in our Home. One of its roles is to provide education for staff on how to care for somebody who is experiencing these behaviours.”
Nowlan also talks about the general level of care offered to all Providence Manor residents by its 420-member staff: “Our philosophy of care is very centered on the person; enabling that person to be the best they can be within the limitations they have in life. We call that the ‘restorative care model.’ So, we don’t ‘do’ for people – we assist people to do for themselves. This is their home and they have the right to make decisions that affect their lives. We work very closely with residents and families to understand how they want to live their life while they’re here.” Providence Care’s partnership with Queen’s University and St. Lawrence College means Providence Manor is also a learning site for new healthcare providers, including doctors. Medical residents complete placements at Providence Manor, gaining experience caring for older adults.

While continuing its ongoing Mission of serving the needs of its 243 residents, Providence Manor is also planning a move from the building that has been its home for a century and a half. “The Sisters of Providence have just recently announced an opportunity for Providence Manor to re-locate to another property. Together, we’re exploring ways for long-term care to be better integrated into a community setting, where there are other housing and health related services. It’s in the conceptual stages and it is exciting.”

The move is approximately five years away, and the University Hospitals Kingston Foundation is launching a capital campaign this fall, which will raise money to support Providence Care’s Providence Manor redevelopment project, as well as other hospital projects in southeastern Ontario.

“The future is going to look very different than today,” says Nowlan. “We want to build on the proud history of the Sisters and design a future that will better meet the needs of the residents improve their lives and make it easier for them to live the life they choose to live.”

Mitchell, who came to Providence Manor some years ago after working in a hospital setting, sums up the enduring character of Providence Manor, which will continue- as it has in the past- regardless of its future location. “There is something about the energy and the culture in this Home,” she says. “There’s a feeling here- when you come into this building– that is so different than many other places. We live this Mission; we celebrate it every day. It’s family; it’s a sense of home. The individuals who work here and the individuals who live here have this sense of community that I haven’t seen in many other places. And I hear this many times from many other individuals, as well.”

Over 150 years ago, four young women came to Kingston to begin their mission of caring for society’s most vulnerable. Today, the work of those brave and compassionate Sisters continues. “It really is about keeping the mission alive,” says Nowlan. “That’s what we’ve been tasked by the Sisters to do. We are taking the torch and carrying it on.”

The Savannah Convention Center – Change is... 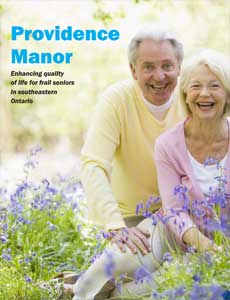