Gateway to the North Shore

Welcome to Winthrop, Massachusetts! Gateway to the North Shore of Boston Harbor with some of the most spectacular views on the East Coast. Settled in 1630 and incorporated as a town in 1852, Winthrop is a quaint, oceanside slice of New England – boasting shops, parks, marinas, inns, and miles of enticing beaches, while close enough to the urban vibe to appease those so inclined. An excellent public transportation system links Winthrop and Boston in just 20 minutes; Winthrop and Logan International Airport in five. North and South Shore communities are just a quick boat ride away.

Winthrop Town Manager, Austin Faison, knows well the perks and challenges inherent in this unique little peninsula and he’s doing all he can to make the town attractive to businesses and families. He admits, “The issue we have is that the major water resource authority for the area’s sewer treatment is at one end of town and Logan International  Airport is on the other side of town; meaning a lot of planes fly over, plus a lot of waste flows underground out to the Deer Island sewer treatment facility. So, the town is beautiful and we have nice beaches but people hesitate to move here, sometimes, because of those issues.”

On the positive side, Winthrop is about the only place on the Massachusetts coast where you can buy a single family house on the water for under a million dollars. The town just had its first million-dollar home sale last year. Much of Boston has been optimized with people converting units and building more; it’s happened in suburban Boston and the whole metro area, as well. Winthrop is one little place where that wave hasn’t come yet, but as public transportation increases, and connectivity improves, it’s going to be a desirable place for people to live.

The Metropolitan Area Planning Commission has done a fair amount of work on behalf of the town in terms of specific projects. Faison explains, “We have a master plan for our Center Business District and the first step of that is taking on the infrastructure work. We’ll redo water, sewage, drainage, and rebuild all the surface areas, so it’ll look nice too. Beyond that, over the summer, we’re really going to focus on what we call ‘Win 2030’ – a visioning document of 10 or 15 metrics that we’d like to target for the year 2030, i.e.  the number of jobs we’d like to see, how many units of housing. Then, we’ll be going through a town-wide master planning process because I want the community to be engaged in how they want it to look in the future. We can shape that by doing a master plan and subsequently updating our zoning based on that plan.”

Winthrop’s population hovers around 17,500, but while every other community in Metro Boston is growing and getting younger, Winthrop is actually contracting and getting older. They’re now trying to figure out how to flip that demographic to have more young families move to town, and help senior residents transition their living accommodations, so they don’t have to look after a big home. Being part of the boom that’s happening in Greater Boston is very important for the future.

“This area was one of the finalists for an Amazon location, just outside Winthrop, at a former racetrack called Suffolk Downs,” says Faison. “They didn’t get Amazon but, regardless, there will be 10,000 units of new housing going in there – it will mean a population bigger than Winthrop’s living right next door. So we’re trying to engage with these partners and different projects that are happening. I work in the Metro Mayors Coalition; it’s 16 municipalities, including Boston, who are looking at things regionally. We’re anticipating northwards of 600,000 people moving here by 2030. Our metric is 150,000 additional units of housing needed by 2030. With all of Boston’s educational institutions and major national and international companies, there are a lot of good, high-paying jobs in the area. Luckily, Winthrop can offer lower housing prices, with the proximity to the city that people are looking for, but still feeling like you’re in a small town neighborhood with a town center you can walk to.”

Winthrop is primarily a bedroom community of Boston, with only a small amount of retail. Almost everybody commutes. So the push is on to bring a couple businesses of 100 or so employees to town. There is a vacant middle school property that’s a prime candidate for redevelopment; an RFP is going out this summer courting interest from any kind of business. Or it could turn into more housing. “At this point, it’s about expanding our tax base and not just putting the burden on the residents who live here,” says Faison. “I’ve always thought the middle school would be a great spot to pop in a boutique hotel. It has access to the city, to the beaches. The first thing that comes with development like that is the restaurants, maybe a brewery, and things grow around it. Winthrop is lacking those things now. We do have a couple boutique hotels in town, and a relatively vibrant Airbnb sector. We don’t have a lot of parking for our beaches, so its nice when people can stay at an Airbnb and just walk across the road to the shore.”

The price of property alone is a draw. Winthrop offers lower-cost leases for businesses to set up; property values are low, so buying a building and tearing it down is totally manageable in this community. There is ample space for entrepreneurial endeavors, such as a craft brewery start-up. Faison believes that economic development is the town’s best bet right now. He tells  companies, “If you’re looking to go to Boston or Cambridge, you could conceivably take on a piece of property here and lease it, or build your own headquarters. Your CEO could have an amazing view of the water and the boats from their office. I’m at the table with everyone I can to show them the tangible opportunities in Winthrop. We want someone that’s interested in investing here for the foreseeable future and growing with the town.”

Climate concerns are at the forefront of every decision. As part of the Municipal Vulnerability Preparedness (MVP) program, Winthrop had an assessment done in early 2018 to prioritize projects that need to be done. “Winthrop is the canary in the coal mine for Boston, in terms of climate change impacts,” says Faison. “We’re already feeling that with the historic tide last year. And we’ll continue to get hit by these things. I have a $60 million budget for the town and I could spend that every year for the next 10 years trying to tackle this problem and it wouldn’t be enough. So, I’m advocating as much as possible to higher levels of government to help provide us with the best practices and insight we need to work on this program.” 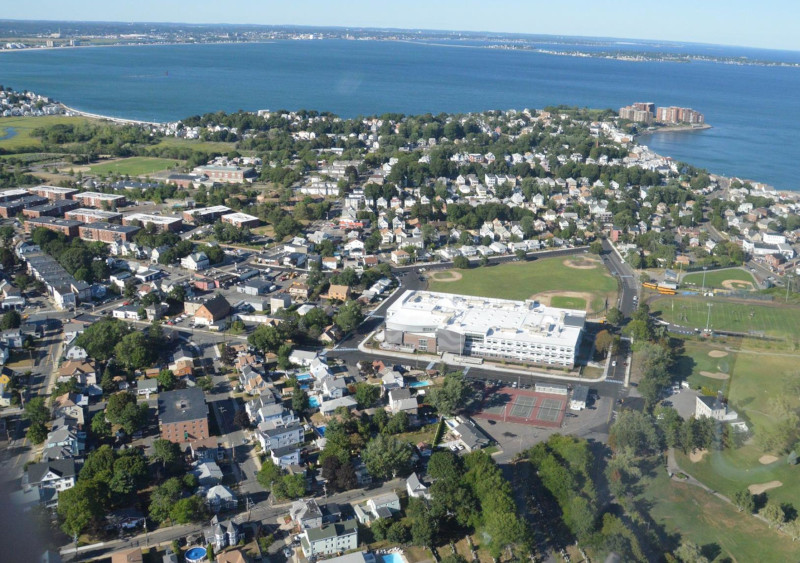 The Center Business District is the first priority when it comes to issues with high water moving through town and new infrastructure is in the works in that regard. A large water storage facility is being built under one of the parks to hold water. Faison notes, “The ocean isn’t going anywhere and we need to think about what to do with that water when it comes here, and how to future-proof development by incorporating resilient zoning, so we aren’t letting people buy properties that may be negatively impacted by climate change. We need to start working now and I would love to have a business community in town, outside of retail, to help lead the discussion.”

Siting for a new Public Safety building is dependent on information gleaned from flood and tidal maps. Finding a location where services can still operate in case of an emergency is critical. The town of Winthrop works closely with Woodard & Curran on engineering for those types of large-scale construction projects. “They’re like our pseudo engineering department,” says Faison, “and they’re very helpful. We’re also engaging with other engineering firms, as well, because it’s turning into a lot of work at this point.”

Winthrop has a wealth of amazing live/work/play attributes, not the least of which are proximity to the major international city of Boston, and the town’s idyllic oceanside location. Faison sums it up best: “Being able to go to the beach on my lunchbreak and completely clear my mind is indescribable. Every day we experience incredible sunrises and sunsets right over the water. People here call this community a hidden gem and I agree with that. And we are really ready to do business. We’re at the table and eager to have businesses set up shop here because the future of Winthrop depends on it.”