What if a disaster was the impetus for growth? Imagine having a clean slate from which to create a better organization. Well, that is exactly what happened at the Punta Gorda Airport in Charlotte County, Florida.

“Like most airports in Florida,” begins James Parish, Punta Gorda Airport’s CEO, “we’re a former military training base from World War II. We opened in 1943, and just celebrated our 75th anniversary last year. We transitioned from a military training facility to a general aviation airport in 1945, but the Airport sat unmanaged for the majority of the first 30 years of its life. The county took over and then, quickly after that, gave it to an airport authority. So we’re governed by the elected, five-person, Charlotte County Airport Authority Board. The Authority, when it was first conceived, had taxing authority and the Airport was flourishing. We lost our taxing authority in the early ‘90s and went through a period of – what do you call it – penny-pinching.”

Over the following several years, however, Parish says that the Airport hit its stride, with ten new hangars constructed. “In 2004, the budget for the next year was slated to be the best budget we ever had,” Parish notes. “We were going to make more profits than we had in the previous 50 years of our existence. But in August 2004, we got hit by Hurricane Charley, and were wiped out. Every building on the Airport was damaged and over 20 were completely destroyed. 80-some-odd aircraft were completely destroyed and we lost about 50 percent of our tenants. All of the businesses on the Airport were closed for an extended period of time. We had no power and no water.” 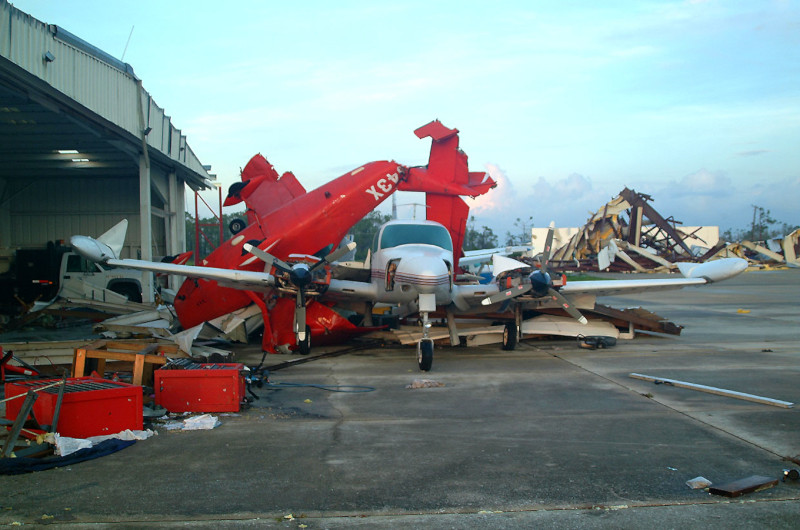 “But the Airport was part of the community redevelopment,” Parish explains. “We were the staging area for Florida Power and Light and for all the Federal Emergency Management Association (FEMA) services. For the next year and a half, we had a runway closed down with all the Florida Power pole crews, their tree crews, all their re-manufacturing line crews stationed at the Airport. And, during the time, we were doing mostly demolition and starting the idea of rebuilding. One of the things we were able to do during that period was to look at our Master Plan and do some things we never thought we’d have the opportunity to do.”

Using previous Master Plans and moving forward, the Airport Authority was able to improve on many things that had been suggested over the years, but never accomplished. For example, the hangars had been awkwardly placed in 1943, but it was not cost effective to move them or start over. But, having buildings destroyed gives one a lot of freedom to ask what, and how, one can rebuild.

“We also updated a lot of our plans and looked for new revenue streams,” says Parish, “We were heavily reliant on T-hangar rentals. Having lost half of our tenants, and already signed a contract to build 95 new T-hangars, we knew we needed something to replace the lost revenue. In early 2006, we started working with a start-up carrier that was going to come in for the first year, two times a week, out of Columbus. Skybus Airlines started operations here in late 2007. In the first three months of operation, they saw a higher demand than they ever expected. We ended up with six flights a week from Columbus and two flights a week from New Hampshire. And, although they shut their doors in 2008, with the rising prices of fuel, they really proved a market that a lot of people said didn’t exist. So, we went out and started marketing to other airlines with the success of Skybus – at least their success here. And in 2009, Direct Air started flying here, and then shortly afterwards Allegiant started flying here. It’s been a lot of ups and downs with the airlines, but in 2010, Allegiant made this a base. In 2018, we had almost 1.6 million passengers. So, we’ve gone from 15,000 passengers in 2007, to nearly 1.6 million in 2018.”

This unprecedented success has helped create a powerhouse general aviation airport, as well. Punta Gorda has about 400 home-based aircraft and 217 hangars, with a waiting list of about a year for people looking for hangar space. Parish adds that all of the rolling door hangars on the property failed during the hurricane, and so when they rebuilt, they built hydraulic doors which were capable of withstanding a hurricane. The Airport now has some of the best hangar space available with some of the lowest rental rates. In fact, Punta Gorda Airport has not raised its hangar rates in over 14 years and yet it remains profitable. 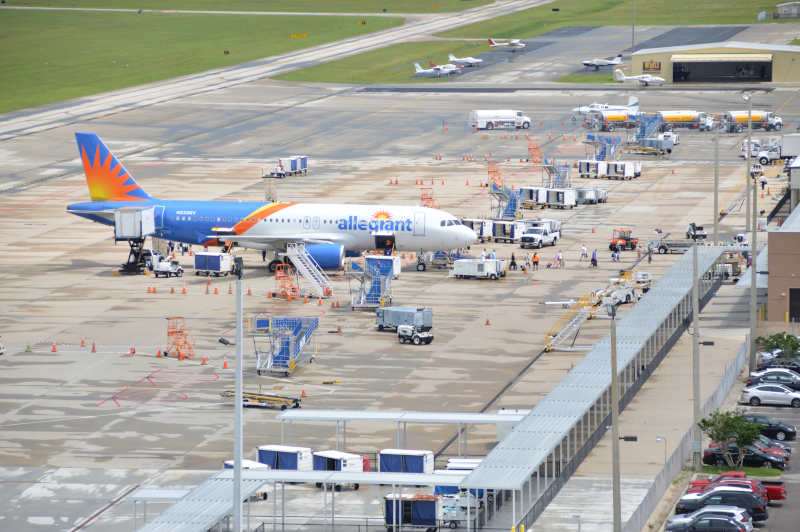 Florida has a total of 119 airports, 20 of which have commercial service. That means there is a lot of competition among them. Being a coastal community, one of the advantages of Punta Gorda is its location – a mile off Interstate 75, and a convenient drive from either Naples or Sarasota.

“And one of the things we’re noted for is that we have a fantastic contract control tower here,” explains Ron Mallard, Chief Operations Officer and Aviation Director. “It is renowned all through Florida. Basically, Punta Gorda is one of the best airports to operate out of air traffic-wise, and you’ll find it’s probably within the top ten airports in low cost of fuel. It’s really a general aviation-friendly airport and we support that throughout, with our fuel prices, with our hangar rentals, and with our special events that we hold for general aviation. Another thing we do to support the GA side is that, once a month, we have what we call ‘Top Off Tuesday,’ where we go out to all of our tenants in the hangars and provide them self-serve prices on the fuel. We bring them donuts, coffee, or whatever we come up with that Tuesday.  So, our tenants have greatly appreciated that. On a whole, we have a very active and great aviation community here.”

“As for further plans,” Parish says, “In 2005, we purchased a hangar-office combo and converted it to the Fixed Base Operations building. Our general aviation terminal was completely destroyed in the hurricane, so we’ve been operating out of about 3,600 square feet plus a 10,000-square-foot hangar since then. In 2020, we will begin construction on a new 13,000-square-foot, general aviation terminal. We will also begin construction on ten 3,600-square-foot hangars and about 10 acres of new pavement on the north side of the Airport to give a little more separation between general aviation and commercial jet traffic. Beyond that, we’re rehabbing and extending our secondary runway, 15/33. It’ll be 6,000 feet one direction and 6,200 in the other. Then, immediately after that, we’ll go into rehab and reconstruction of runway 4/22. We won’t be extending it at all but it’ll go back to 7,195 feet.”

These upgrades will be funded with FAA entitlement money, and, in partnership in the construction of the terminal, with the Federal Department of Transportation, plus monies which the Authority has been banking over the last few years.

According to a Florida Department of Transportation study, the yearly economic impact of Punta Gorda Airport to the local economy is estimated at $1.27 billion. In addition to the wealth generated from its general and commercial aviation activities (last year, there were 84,000 operations of which 10,500 were air carrier operations), the Airport has an offshoot of Charlotte Technical College, which is planning to train its students in aviation airframe and power plant mechanics;  a home-based Civil Air Patrol; and the U.S. division of Applus Laboratories – Arcadia Aerospace Industries. AAI performs inspections on Honda and Boeing structural composite airframe components.

In addition, there are a number of non-aviation tenants on its industrial park property, including FedEx, Pulsafeeder (pumps), and AmeriGas. “The Charlotte County Sheriff is also one of our tenants and they have almost 600 employees here at the Airport,” say Parish. “Plus, we have about 300 acres that’s prime for development. We have roads and infrastructure all in place. One of our newest neighbors is Cheney Brothers, a large food distribution company who just built on 37 acres. We are also, currently, in the process of purchasing 60 acres on the north side of the Airport. We are fortunate that, a number of years ago, the Airport Authority, the airport management, and the county worked together to put an overlay zoning district around the Airport that allows for commercial and industrial development but does not allow for any residential development. So, we have a good two-mile perimeter around the Airport where there can be no additional residential development. So, there’s a lot of land available and we’re just in a prime location for industrial development.”

When all is said and done, however, Punta Gorda Airport’s major attribute is its reborn designation as a prime GA airport with great air carrier service, serving the people and businesses of the tourist mecca that is southwest Florida. “Our Airport gives you the opportunity to travel to 40-plus, nonstop destinations and it brings those people from all over the country into our community,” says Parish, in conclusion. “And, because of our success, Allegiant has chosen Southwest Florida as the location for their first resort. They are building the first phase of a $450 million resort right on the harbor, five or six miles from the Airport. So, we’re excited about that partnership with them. The important thing, I think, is that this Airport works extremely well between general aviation and the air carriers. There’s no animosity whatsoever. Everybody flies well on the airfield here.”

After the company’s creation in 2008, AAI has received the Edward Lowe Foundation, Florida Companies to Watch Award then followed that up with the Florida Governors Business Ambassador Award.  Creating a unique culture striving for excellence in the various fields of Non-Destructive Testing. AAI has facilities across the Nation assisting its manufacturing client base to be successful in new emerging commercial and military aircraft programs.

AAI is equipped to handle the rapidly changing aerospace manufacturing environment with a Co-Location model for client partners. The model allows AAI teams to secure space inside manufacturers to install the required automated machinery assets and personnel; establish the certified and accredited inspection department and offer back services to the manufacturer on a firm fixed price per part.  Allowing manufacturers to concentrate on core competencies enhancing overall efficiencies in the process, lowing costs across multiple programs. Our teams deliver turnkey solutions that run autonomously for the manufacture linked to their specific in-house tracking systems and can include all aspects of the Quality Inspection Special Processes.

The company actively offers ground-up training and recruiting programs across multiple NDI and Engineering platforms while promoting growth avenues throughout the global organization.  As part of the Applus Laboratories family of companies, Arcadia Aerospace Industries brings the strength and resources of an organization with over 20,000 employees in 70 different countries.