The San Luis Valley Regional Airport (ALS) is a non-primary, commercial service and general aviation airport, located one mile south of the City of Alamosa, Colorado, in the south-central part of the state. The airport covers 1,700 acres at an elevation of 7,539 feet. It has one asphalt runway, 2/20, which is 8,519 x 100 feet, and one turf runway, 6/24, which is 3,400 x 100 feet, and mostly used by student pilots and crop dusting businesses. 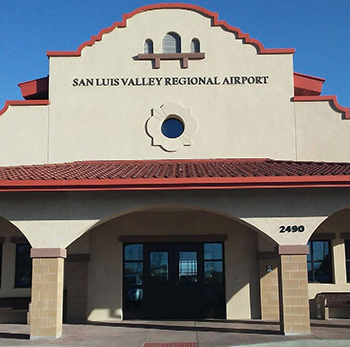 “The San Luis Valley Regional Airport was constructed in 1939,” recounts Airport Manager, Will Hickman. “It started out very humbly – one hangar was built by Carl Bergman and Lloyd Jones and the City of Alamosa built a second hangar during that same year. It was originally known as Bergman Field. In March 1941, the airfield was officially operational, and in July 1941, they had the first meeting of the Airport Board of Control. In 1947, Monarch Airlines began service with a DC-3 aircraft. It was the first commercial service here in Alamosa. At the beginning, the runway wasn’t paved. In 1954, they paved the runway; they added some other improvements, such as a new apron and tie-downs, and a new terminal building on the west side. The air carriers that have been here are Monarch Airlines, Frontier and Great Lakes.”

Today, ALS is owned and operated by Alamosa County and employs four full-time workers to operate and maintain the facility. Current commercial service is funded through the U.S. Department of Transportation Essential Air Service (EAS) program, and provided by Boutique Air, operating a Pilatus PC-12, with daily flights to and from Denver. There are also 27 general aviation aircraft at ALS, as well as medical flights operated by Eagle Air Med, a subsidiary of Guardian Flight. Additionally, the Airport is used daily for activities such as cargo operations, flight training, aircraft maintenance/avionics repairs, military support, and aerial fire bomber aircraft. Also, the Airport’s high altitude attracts helicopter manufacturers and owners for high altitude testing and training. The Airport’s full-service FBO – the only one in the San Luis Valley – is Centric Aviation, which provides fuel and pilot services. Depot Avionics Inc. provides avionics sales and service.

Hickman reports that this summer, ALS is embarking upon a $7 million taxiway reconstruction project. “The Airport received a supplemental appropriation grant from the FAA to cover the full cost of that project,” he notes. “That was a good thing for us. Not many airports get that type of funding without any match, but the FAA sees it as a priority. That pavement is definitely in need of reconstruction.” 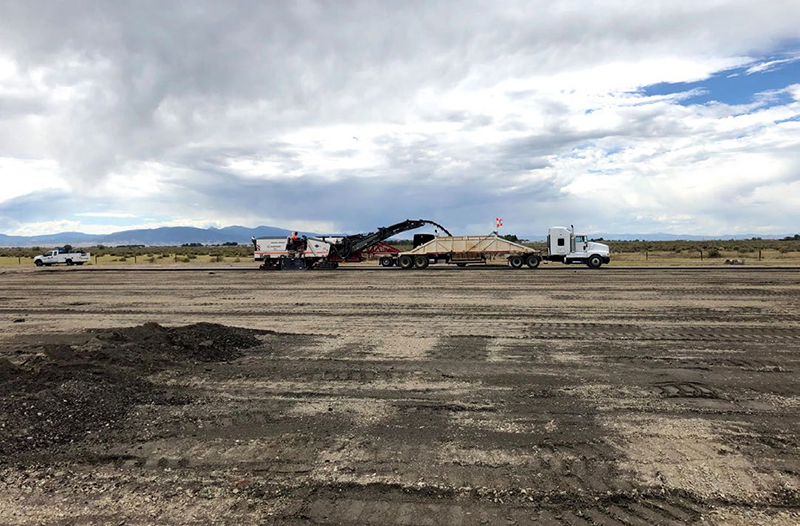 “Over the last few years we’ve done a lot of capital projects” Hickman adds. “One of them is the wildlife perimeter fence; it’s approximately eight miles of fence that encompasses the whole Airport. We had a lot of issues with wildlife, specifically deer getting on the field, inside the safety areas and even on the runway, which is, obviously, a big concern. So, this alleviates that and I haven’t seen any wildlife getting in. We get the smaller critters like rabbits – you can’t keep those out. But we’ve had some good feedback from customers. Previously, they wouldn’t feel comfortable flying in because of the deer hazard. And it adds a layer of safety and security to the Airport. So, it’s a dual-purpose fence – for people and wildlife.” Other past improvements include a new, 8,975-sq.-ft. terminal building and parking lot constructed in 2014, and the rehab of Runway 2/20 in 2017.

Another item on ALS’s current agenda is a new Master Plan study, which will set the development goals for the Airport’s next 20 years. “We’re going to explore all the areas for future expansion,” says Hickman. “A lot is going to hinge on what we put in our Airport Layout Plan (ALP), in terms of development. If you want to have a project that is partially funded by the state or the FAA, you have to have it in your ALP. Our current ALP was last updated in 2007. So, it’s definitely in need of an update. I’d like to see us use the land that we have; the majority of it is not being utilized. We have some property that we’re planning on using for non-aeronautical development, and we have some investors who would like to build on that land. At the moment, it’s under review by the FAA.”

Hickman stresses that the Airport is resolute in wanting to expand and grow, and it has the support of the county and the surrounding community. “The Airport is a vital resource for the San Luis Valley for a number of reasons,” he states. “We’re the only commercial service airport in the Valley and we fly people in and out daily to go to the hospitals. We are making a lot of improvements, and with our budget, we’re doing the best we can. We also feel like our funding should be going up with our enplanements. We’re predicting we’re going to have over 8,000 enplanements this year to be eligible for another tier of funding from the FAA. It would bump us from $150,000 per year to $600,000 per year and we could do a lot of the improvements with that extra funding.”

“We’re also pursuing our Part 139 certificate,” he adds, “and the goal is to have that certificate back before October 1st, when the new air carrier service would start. We’re an Essential Air Service Airport and the RFP for the new air service just went out. That’s one of my big tasks, right now. It would allow for more flexibility in the size of aircraft that can come in here. You have to have that for aircraft over nine seats. That’s how we can fly Boutique Air. They’re actually an air taxi, Part 135, scheduled carrier with less than nine seats.”

Finally, Hickman relates that ALS likes to host special events and believes that with the city and county’s help, future marketing initiatives will help enhance the Airport’s ability to attract new customers and new business. “For instance, the FBO has events in April and August with the Young Eagles, which is a neat event for kids because they get free rides in airplanes,” he remarks. “Another thing we do is host a lot of school field trips. We’re always open to that; we like to teach people about aviation and show them the value of it and, hopefully, get people interested in it. In the future, I would like to start hosting more fly-ins, and, possibly, bring the air show back that used to be here years ago. We just have so much construction here in the near future. We’ll have to get through the major taxiway project and then we can start to focus on those other things.”

WHAT: A non-primary, commercial service and general aviation airport

EWR Radar Systems, Inc. offers a versatile line of COTS and custom weather radar systems with the capability and experience to deliver solutions to meet the most demanding performance and technical specifications. EWR’s unmatched lifecycle support produces the highest levels of operational availability and customer satisfaction.