A legacy of community service

The community of Wausau, Wisconsin has a long and rich history in aviation. The Wausau Downtown Airport, constructed in 1927, is one of the oldest airports in the state. Way back when pilots first appeared, barnstorming unsuspecting farmers, the people of Wausau wanted their airport to be better than just a field by the edge of town. So, Ben and Judd Alexander decided to build an airport, with the understanding that the city would take it over and run it for five years. Then they went out and hired one of the most famous air racers of the day, John Wood, to run it.

“Back then it was known as the Alexander Airport and was the second busiest airport in Wisconsin,” explains John Chmiel, Wausau Downtown Airport Manager. “John Wood started managing the airport for them and that really helped because he had a lot of connections nationally. This was just the beginnings of the aviation industry and he was able to attract national attention to the Wausau airport. In the 1920s and ’30s, There was an event called the Ford Reliability Tour. Ford was trying to overcome the public perception of flying – which was the barnstormer era. They wanted to make flying more reliable and safer in the public’s eye and Ford also had it in their head that they were going to start manufacturing airplanes. So, they came up with the National Air Tour that was actually a race for the Ford Reliability Cup. And because John Wood was our airport manager, we had more stops in Wausau than any other location in the U.S. Four of the races were held at Wausau Airport and if I’m not mistaken John Wood won the National Air Tour in 1928, which at the time was one of the biggest national air races in the country.” 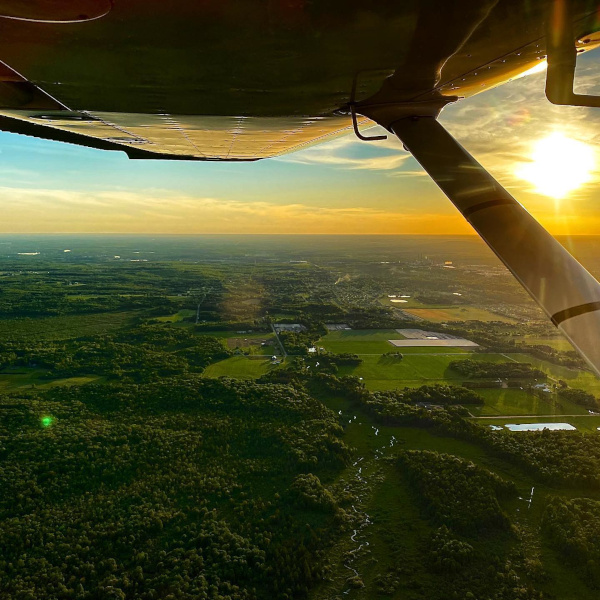 Unfortunately, John Wood died in an air race in 1929. Immediately after, the airport was taken over by Archie Towle, himself a popular barnstormer, who ran the airport from 1931 to 1945. Then Towle’s daughter and son-in- law operated it until 1976. Chmiel believes that this strong, steady management helped ensure the airport’s longevity. In 1992, Wausau Flying Service took over management of the airport, which is still owned by the city of Wausau, and with their permission renamed it the Wausau Downtown Airport.

As the FBO, Wausau Flying Service has two contracts with the city: one is to manage the airport and the other is to provide services at the airport. Chmiel reports, “We’ve been doing that for almost 30 years which is a good long tenure, and about four years ago we renewed our contract for another 30 years. The airport has changed a lot over that time, and probably will change even more in the next 30. When we first started there were 30 T-hangars. Since that time, we’ve had another row built adding ten more T-hangars.”

But the greatest area of growth has been in allowing private individuals to make the investment and build their own hangar on the airport. “We’ve had 16 hangars built that way,” says Chmiel, “which is a great advantage for the city because it doesn’t have to invest in the hangar space. It allows the individual to build exactly what they want with whatever amenities they need. When we first came up with the idea of using the west side for private hangar development, people shopped around and pretty much everybody that was building chose Morton Buildings hands down. There was just a sense of quality to what they constructed. It makes it so much better when you have a contractor who knows the area, knows what people want, and can deliver on that.”

These private builds have been so popular that the airport created an “East Hangar Development Area” on unused land on the other side of the airport and installed a taxi lane to give hangar access to the runways. This is phase one, and by phase three they expect to have an additional 20 hangars on the field and perhaps enough income generated to offset the operating cost of the airport.

There is a sense that general aviation fuels the airport, so to speak. Because of this, the City of Wausau rebuilt the terminal in 1998. At that time they were operating out of the original FBO building from the 1940s even though there was a terminal that had been built for commercial traffic in late ‘50s. “We moved into the terminal in 1998 and have been operating out of it ever since,” says Chmiel, “but it’s time for an upgrade. So in 2021, we’re using our capital investment money from our GA entitlement funding from the FAA to come up with the architecture and design plan to remodel the terminal building to better represent our community. This is a forward-thinking community and there’s a lot of growth in the Wausau Metro area. It is a great place to live and we look at the airport as an off-ramp from the sky, so when people fly into Wausau their first impression should be a good one.” 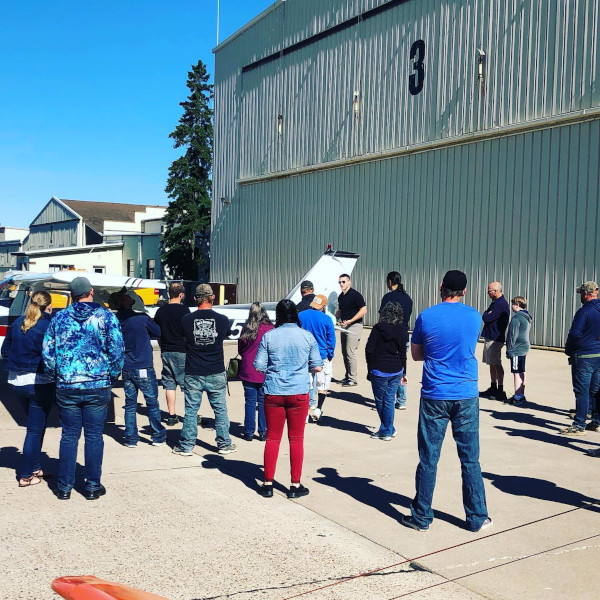 Wausau Downtown Airport is still seen as an important part of the community for so many reasons. A key factor in this over the past few years has been the flight school. Another great example is the airport’s long-time relationship with the Wausau Supply Company. Chmiel explains, “Our relationship with Wausau Supply Company began many years ago when the original owners were trying to expand into other areas of the country. They still use our airport for their aircraft and that community relationship has been a big part of our growth as an airport.”

Even before COVID-19 began to change the landscape, people across the country were talking about looming pilot shortages. Wishing to be part of the solution, Wausau Flight Services created “Aviation 101” in partnership with the local school district. This program is for high school-aged kids and allows them to study towards an FAA private pilot certificate. They go to the airport twice a week and take 17 lessons on the FAA flight simulator – learning everything there is to learn before getting into the cockpit of an airplane. This reduces the time it takes to get a pilot’s certificate and also allows them the opportunity to explore the ins and outs of an aviation career.

“About five years ago the local neighbourhood decided to create an airport themed park for the kids,” says Chmiel, “and the airport staff became involved and helped create this wonderful place. It actually has runways and taxiways and a real A7 Corsair on a pedestal. There is also a control tower and a hangar and nine educational stations throughout the park that teach elementary school-age kids about aviation and flying and the history of the airport. In addition, we’ve developed a program called Model Airplane Night, where we help teach middle school-age kids how to build several models of airplanes so they can develop model flying skills and learn how an airplane flies. Another program created by the local EAA chapter is called Learn Build Fly. That program takes high school kids who have an interest in STEM and the blue-collar arts and airplanes, and teaches them about aviation and engineering through the fabrication of real airplanes. They’re actually about 80% done with their second airplane! We’ve got all these youth programs that are similar to a feeder program for hockey – aviation programs at all age levels so we can feed these kids into an aviation career.”

In summing up Wausau Downtown Airport’s secret to success, Chmiel reflects, “I think the main reason we have been able to be so successful, even now, is all of these partnerships with the local community. I am proud of the partnerships we have been able to create, and I believe our facility gives back to the community as well. There is so much to look forward to on the horizon.”

What: City-owned, public use airport

Morton Buildings is the industry leader in post-frame manufacturing and construction with a legacy of excellence that spans more than a century.  At Morton, the difference is in the details.  From our cutting-edge innovations, best-in-class warranty, to craftsmen in the field, we are dedicated to surpassing expectations.  Learn more: www.mortonbuildings.com.

Wausau Supply Co., a 100% employee-owned company, was established in 1947, building its foundation on providing next-day deliveries to its network of dedicated retailers. For the past few decades, Wausau Supply Co. has proudly manufactured innovative, American-made siding and door solutions as Diamond Kote® Building Products and Waudena®, consistently adding value through the supply chain. For more information, visit www.diamondkotesiding.com and www.waudena.com.

Hycraft Homes – Capturing the essence of...