Entering the lobby of the Wheeling – Ohio County Airport terminal is like stepping into the past… to an era when air travel was sophisticated and elegant. The original benches and displays, art deco glass doors, photos, and a wealth of memorabilia take you back to the glory days of flight. Dwight Eisenhower met Richard Nixon here, just after Nixon’s Checkers speech in 1952. John F. Kennedy and his wife Jackie Kennedy sat in these chairs while waiting for transportation after a mix-up. It’s a fun slice of nostalgia in an area that itself is steeped in history.

The City of Wheeling, West Virginia lies along the Ohio River in the foothills of the Appalachian Mountains. It is one of the oldest settlements in the country, originally in the British colony of Virginia, and later the second largest city in the Commonwealth of Virginia. Wheeling dates back to the beginning of the 1600s and was part of the first enduring English colony in North America. Founded by the Virginia Company, settlers first landed at the Jamestown Settlement which was at the brink of failure before the arrival of a new group of settlers and supplies by ship in 1610. Tobacco became Virginia’s first profitable export, the production of which had a significant impact on society and settlement patterns. Wheeling was the first capital of the new state of West Virginia, mostly because it was along major transportation routes such as the Ohio River, National Road, and the B&O Railroad.

The airport itself has its own rich legacy and will be celebrating its 75th anniversary this fall. Wheeling – Ohio County Airport opened in 1946 and the first passenger flights began in 1947 when TWA and Capital DC-3s flew in. Lake Central, which would later become Allegheny, began the next year and continued to serve as a commuter carrier until 1970. There was another commuter attempt in the late 1970s but it was cancelled due to lack of demand. 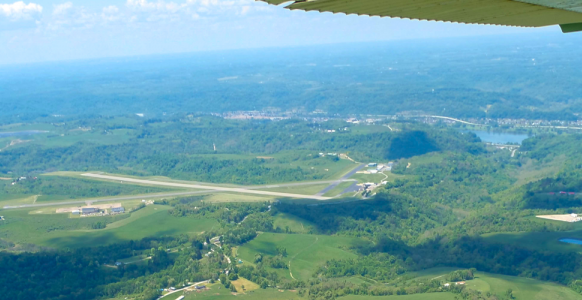 Randy Russell, Ohio County Administrator, reports, “We are going to put on a kind of a combination 9/11 commemorative event along with our 75th-anniversary event this fall. It is going to start on Friday, September the 10th with an education day and we hope to attract middle school and high school children up to the airport. We will have aircraft for them to check out and events for them to participate in, and then on Saturday, September 11th we will start the day with a memorial service to honor all the heroes, including not only military and veterans but also first responders. That day will have lots of food and entertainment and end with fireworks. We really have a lot to be proud of here.”

Ohio County is in the northern panhandle of West Virginia and the airport is located roughly eight miles north of Wheeling, the county seat. “Wheeling is a city with a lot of great amenities,” says Russell. “We have a beautiful city park system, golf, cabins to rent… We also have a relatively large retail development known as the Highlands where there are over 83 stores and restaurants. Then we recently opened the Highlands Sports Complex, which consists of six indoor basketball courts that double as volleyball courts. There is also a full-sized indoor football field, as well as rock climbing walls, an arcade, and various meeting rooms. We hope this complex will drive a lot of sports traffic to the area.”

He goes on to suggest that Wheeling, as well as Ohio County itself, is a relatively laid-back place – a quiet place that allows for people to relax and enjoy all that life has to offer. Amid this, the airport itself has been underutilized and has not been on the radar for the average person in terms of what it has to offer. But the potential is there to make it a key economic driver as well as to start bringing in more business, tourism, and sports travel.

“We have a great airport and are in the process of making it even better,” chimes in Russell Escue, Airport Manager. “We have two intersecting runways, the primary runway is 5002’ x 150’ and the secondary runway is 4499’ x 150’. We also have a control tower that is run by federal contract and all the navigational aids you need to fly in and out during all types of weather. It is a gorgeous setting, rural, up on top of a hill with a great 360-degree scenic view. You can also buy aviation and jet fuel from the Wheeling – Ohio County Airport Aviation Centre which is run by the county as well.”

Both Escue and Russell have an eye for the future. It has been a while since any real development was done at the airport, but they hope to rectify that soon. For now, it has been just taking stock of what they have and bringing it up to a place where they can launch into capital improvement. The airport sits on 923 acres with plenty of room for additional development, and is currently working on a development plan that will allow them to attract new businesses to the property. There are already two helicopter companies onsite, a waiting list for hangars, and so much potential for more.

“Our first thought has been flight schools,” says Russell, “and we’ve talked to local educational institutions that are looking at, perhaps, putting together a flight mechanics training program. Then there are drones, and we are seriously looking at getting on top of that. Logistics is big as well and we can house a delivery service up here. Another thing in our favor is that the Department of Transportation is in the process of constructing a bridge just a bit north of our airport up in Brooke County, which will bring traffic as well as open up a lot of space over in Ohio in Jefferson and Belmont counties. We would love those folks, whatever happens up there, to be able to utilize our airport as much as they can.”

“We could also use an aircraft maintenance facility,” adds Escue. “We used to have one, just like we used to have a flight school – and getting both back up here would make a big difference and add to our community recognition. We need to get people to remember that the airport is here.”

Summing up the future goals of Wheeling – Ohio County Airport, Russell shares, “Our airport really is a hidden gem in Ohio County, and it’s almost been a forgotten piece of the county. We are seriously interested in revitalizing it and part of our event in September is going to be about bringing people back. When I was a youngster, we used to go up to the airport and watch planes come in and out all the time. We don’t have that so much anymore and there are a lot of folks in Ohio County that don’t even realize we have an airport. So we’re going to shine a light on this forgotten gem, and we are seriously focused on bringing in business.”

What: A public general aviation airport

Why Wheeling? “Why not” seems like the more appropriate question.
Wheeling quite literally has a little bit of everything, from great bars and a casino to great history. Whether you are looking for a golf getaway with the guys, a night out with the girlfriends, or an affordable family vacation, Wheeling is the perfect destination.

Anyone interested in American history can appreciate Wheeling, since the city served as a pivotal point in both the Revolutionary and the Civil Wars. Visitors can see where West Virginia became a state in 1863 at Independence Hall, and the Suspension Bridge also has a lot of history behind it.