Just north of Indianapolis, Indiana, a couple of hours southeast of Chicago or southwest of Detroit, depending on which way you are coming, lies the charming, rural, lake-filled Hamilton County – a popular tourist destination with beaches and trails, fishing, and restaurants. Next door you’ll find Boone County, with an equally attractive mix of restaurants, festivals, shops, and even a Polo Club.

Where those two counties meet is the Indianapolis Executive Airport (TYQ) – a busy general aviation facility averaging over 41,000 operations a year. The airport has one 5500-foot runway and houses 89 aircraft: 63 single-engine, 7 multi-engine, 16 jet, and 3 helicopters.

“We attribute our success over the last couple of decades to our location,” explains Airport Director Sam Sachs. “We are sandwiched between two different counties that are both highly affluent and both growing very rapidly, so it’s kind of in an interesting spot. These two counties boast the two highest median household incomes in the state of Indiana and that normally makes for good business jet travel. We also have a lot of wealthy individuals that live within proximity to the airport and utilize our facility. We find that if people can afford to travel privately, they are choosing to fly from here. And with so many people and businesses moving to these counties, our business traffic has also increased greatly. We are, according to the FAA, the second busiest airport in terms of business aircraft operations in the State of Indiana.”

Not surprisingly, there is a premium on hangar space at TYQ. That is not unique among GA Airports, but the growth has meant that even as they increase their hangar offerings, Indianapolis Executive realizes there is no end in sight when it comes to construction. 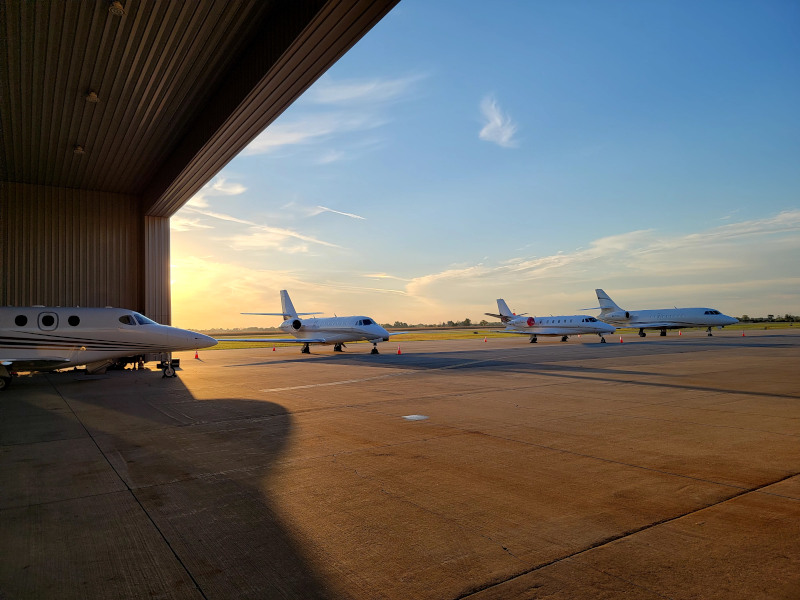 The FBO, First Wing Jet Center built 12 executive hangars over the last year. These are 60×65 feet and are perfect for smaller business jets like the smaller Citations or King Air. They were constructed with a land-lease agreement and are a perfect complement to the operations. The hangars are modern, with private bathrooms, and can be customized for the owner, one of which has bought two of them and combined them.

As Sachs attests, “They are beautiful, sought after, and completely sold out. We constructed them with a sort of ‘If you build them, they will come’ attitude, and we got an amazing response with quite a variety of tenants and different aircraft as well. Some ended up being new clients, some were leased out to people already on the field that wanted more space or a new style of a modern hangar, but we ended up expanding our offerings and seeing what was possible. We have enough space to build the same number of hangars again, or perhaps some larger hangars that could house Challengers or Gulfstreams. So far, we have focused on the business hangars because that is what we have the least of, and where most of the new clientele is coming from – but we will also have to be looking at new T-hangars as well for the smaller GA planes.”

The airport team works with several local development organizations, including the Chambers of Commerce and Tourism Bureaus. The Hamilton County Tourism Board is one of those groups. Sachs acknowledges, “They are great partners. There is so much tourism and business travel getting filtered from our airport into Hamilton County and by working together with them we are trying to make sure everyone is benefiting from the direction we are going.”

Perhaps the most significant project moving forward is the renovation and lengthening of the runway. Work on making this happen began a decade ago and has an ultimate potential length of  7700 feet– but the current plan, adopted by the FAA, is to lengthen the runway to 7000 feet. This is an $11 million project and they are down to the last $6 million of it. When funding comes in this year, they are hoping to do all the paving. The window of opportunity, in terms of weather for a job like this in Indiana, is short – from May to October – and that will also mean intermittent runway closures during the busiest time of year. On the other hand, it will make it safer, allow for larger business jets, and most importantly, open the airport up to a lot more charter jet flights.

“We are not widening or strengthening the runway,” Sachs explains, “We are not trying to displace our current tenants by bringing in commercial service, we are hoping for the same mix of users we currently have, just a few more, who will benefit from the longer runway and bigger safety margin. We have already had some large Challenger and Gulfstream aircraft stop in for fuel and the current runway “just” meets their needs. With 7000 feet, they will not be challenged, and we will seem more accessible to that size clientele.”

Upgrading infrastructure to meet current needs is always going to be a part of airport operations. And Sachs has taken this seriously over his tenure. Of note: They recently began using a new airfield de-icer to spread on the runway, which costs upwards of $30,000 a year and helps keep the ice and snow off the runway. They are also in the process of upgrading their ground-based radio systems; where pilots used to have to use a telephone relay system to radio Indianapolis Approach Control, there will soon be a direct frequency between the airport and air traffic controllers for instantaneous communication. No dropped calls or delays. Again – modernizing and making the airport more appealing for the local users. 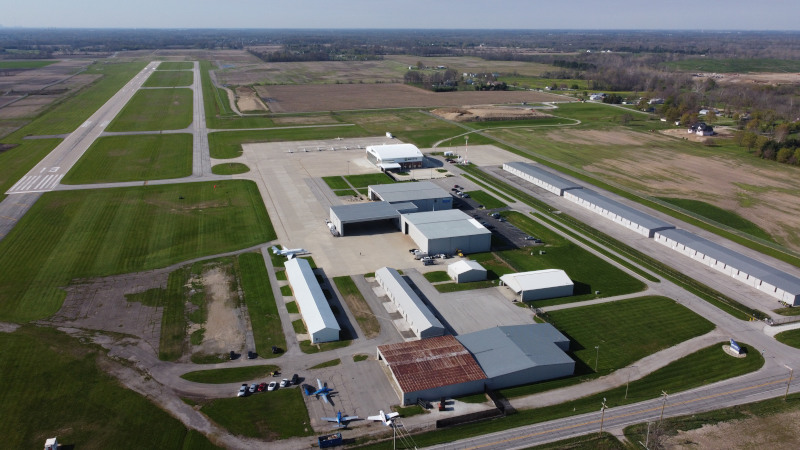 “Being a part of the community is at the heart of what we do,” Sachs emphasizes. “Historically, before COVID, we used to do two things that helped us reach out. First, we would offer internship opportunities for local high schoolers to take advantage of. But secondly, and more frequently, we partner with local service organizations such as schools, daycares, the Boy Scouts, that sort of groups and we provide a free hour-long tour for the kids. We give them a quick informational session and talk about what we do here at the airport, and aviation in general, give them a walking tour and then let them see some of the airplanes. Then they spend a little time with the flight school that the FBO offers and get to see some of the basics behind how an airplane is controlled. We have been doing this for some time now… we can sometimes see up to six or seven of these tours a month and it is really popular, both for the participants and for us. It is a lot of fun.”

Sachs credits the FBO, First Wing Jet Center, for a lot of what has built the community at the airport. They have constructed the new hangars, they operate all of the refuelling and maintenance capabilities, and they also run the flight school which has Cessna and Cirrus aircraft that are very popular. During the pandemic, there were even more people than usual taking advantage of the flight school, perhaps just because of more free time, but it has allowed them to see new faces flocking to the airport.

“First Wing recently merged with Jet Access,” says Sachs, “who operate ten FBOs across four states and have their charter fleet of 52 aircraft. The merger officially took place in December of 2021 and now they are part of this larger umbrella of companies and so they have a decent number of resources, a larger spread, and a larger charter fleet as well. We have a number of those aircraft coming through here now, some are also based here. And what we are seeing is that our facility is being used for a lot of the maintenance. This merger has become a huge boost to the airport and a great addition to our current growth.”

Looking ahead, the opportunities are enormous. “There is so much going on,” says Sachs. “The Federal Government has released so much money for infrastructure and that is opening up a lot of possibilities for us. With this most recent funding promise of millions of dollars towards infrastructure, we are looking at a lot of projects. We are in the middle of sitting down and discussing what we should do next – things like new approach lighting systems, ramp size increases, and hangars. Each one is an important project, but we need to see where to start and what steps to take as we seek to modernize and build out the airport. It’s exciting! We are at a pivotal time in the airport and now we have the money to spearhead it!”

What: A thriving general aviation airport

Opportunity awaits in Hamilton County, Indiana, a great place to live, work, learn and play. Just north of Indianapolis, Hamilton County is one of the fastest-growing counties in the country and has earned national designations like “Best plave to live”. 150+ headquarters, including insurance, finance, tech, ag, logistics and healthcare. Home to Grand Park Sports Campus, Ruoff Music Center and Conner Prairie.

The Watsonville Municipal Airport – For general...