The Wiscasset Municipal Airport – Good, any time of year

Good, any time of year

Business View Magazine interviews representatives from the Wicasset Municipal Airport, as part of our series on regional American airports.

The Wiscasset Municipal Airport is a public-use airport located three miles southwest of the central business district of Wiscasset, a town in Lincoln County, Maine. The Airport had its beginnings in 1957, when the town purchased several parcels of land from local residents, and in 1958, when it submitted a grant application to the Civil Aeronautics Authority to begin the design process that would eventually become the Airport’s only runway. The Airport opened in 1961 with a 2,600-ft.-long turf runway and a hangar. Over the years, additional land was acquired (today, it covers an area of 196 acres); a terminal building was acquired; and the runway was extended twice – to 2,800 feet in 1962, when it was paved; and to 3,400 feet in 1968. During the period from 1968 to present, a full-length parallel taxiway was constructed, and instrument approach procedures developed for both runway ends.

The mission of the Wiscasset Airport is to provide the Town of Wiscasset and the surrounding communities with a safe, reliable, and friendly aviation environment and to support the economic development of the region while observing the Airport’s dedication to general aviation. From 1985 to 2000 it hosted an air charter operation, but today, it is a general aviation airport, only, with some 32 GA aircraft home-based there. The Airport is also used by Life Flight, Maine’s emergency air ambulance service. 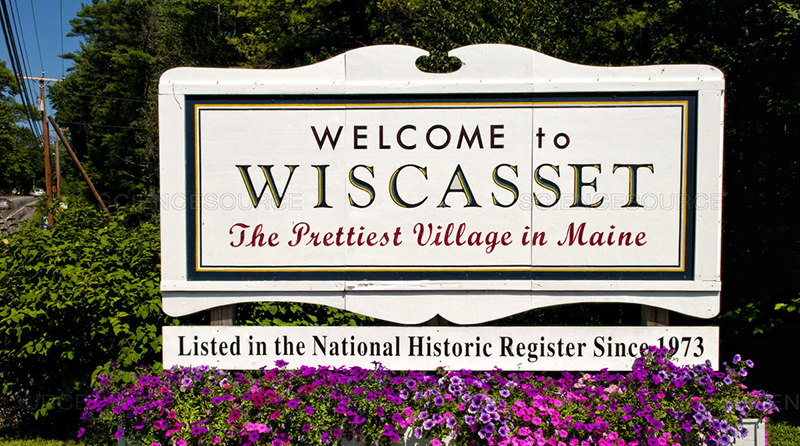 “The Airport is ideally located in mid-coast Maine,” observes Ervin Deck, a local pilot who was once Wicasset Municipal’s part-time Manager. “It’s east of Portland and it encompasses some of the more popular tourist areas like Boothbay Harbor. We get a lot of pleasure-flying people coming up here from other parts of New England, New York, and Pennsylvania to their summer homes. So, it’s an ideal location to service those people, as well as visitors from Bath to Boothbay. It’s not unusual to see somebody fly up for a few hours, ride into town, and stand in line for a lobster roll at Red’s Eats. South of us is covered by Brunswick (Executive Airport), and further south is Portland International Airport. But ours is a jewel of an airport in the mid-coast region.”

Deck adds that up until 2011, Wicasset was the only generally aviation airport within 40 miles along the coast. “Then, the Naval Air Station at Brunswick closed, and they converted the military airfield into a civilian airport,” he recounts. “When that happened, our Airport saw a big drop in jet traffic. We used to sell quite a bit of jet fuel, but we lost a lot of that to Brunswick because of their much longer runway. It also had an impact on the sales and the number of based aircraft here; we saw quite a few aircraft move over to Brunswick – mostly pilots that lived in that area because it was more convenient for them. What we did see was a good uptick in aviation gas sales in the past seven or eight years. One reason for that was because the town took over the FBO about that time and we were able to market the fuel more competitively than the FBO did. It’s one of the reasons that the Airport is, essentially, self-sufficient, except when there’s a major expenditure that comes up.”

“When we need money in an emergency situation, like equipment going down, we have to go to the town of Wicasset, who owns the Airport, for money,” notes Airport Manager, Rick Tetrev. “But as regards operations, we’re self-sufficient for the most part. We have self-service gas, and we sell quite a bit.” “It’s an excellent gas stop,” adds Steve Williams, Chairman of the Airport Committee. “Fuel prices are competitive.”

One of the Airport’s mainstays are flights in and out of Wicasset by families dropping off and picking up their children who attend one of the many private schools and summer camps in the area. One company, PlaneSense, is a fractional aircraft ownership company that flies PC-12s, and the new PC-24 jets. “They bring their children for camp or school,” says Tetrev. “And we get a lot of revenue from that type of service. Unfortunately, COVID has cut out a lot of that, this year. For example, in August, I would normally have had about 75-100 of those flights come in. This year, I had two. In September, I had four. October was empty.” According to Tetrev, the only good news to come out of the COVID-19 pandemic was the sale of three GA hangars that had been vacant for several years. “We sold them in a period of about a month-and-a-half to people from New York who moved up here,” he relates.

For many years, the Airport also hosted the Texas Flying Legends, an assemblage of vintage, World War II aircraft. “They had three locations in the country,” says Williams. “Wiscasset was their summer location; the other two were Houston and Minot, North Dakota. They brought six WWII fighter aircraft that provided an opportunity for a number of aviation groups to work with them to promote this Airport. For a period of about five years, we had air shows.”

“Back when we were not self-supporting, we depended a lot on the local taxpayers,” Deck shares. “And, for the first couple of years, trying to get the Airport’s budget through, the vote was always a challenge. Sometimes, it barely squeaked through. A year after the Texas Flying Legends arrived, and put on a fantastic show one weekend, the next year, the budget passed almost unanimously. So, it showed just how important public relations are.”

As is the case in almost every airport, there are maintenance projects on Wicasset Municipal’s agenda. Tetrev reports that the apron is undergoing crack repair, and next summer, the runway is going to be rebuilt at a cost of over $3 million. “We’re looking forward to that, although, unfortunately, we will have to close down for about six weeks during the summer. But, up here in Maine, that’s when you have to do construction.”

“The runway reconstruction project is going to be funded 90 or 100 percent by the FAA,” says Deck, “but it took years for that project to come to fruition because we had obstructions off of one end of the runway that we could not clear because it was on private land. Through a lot of hard work by a lot of people, the town was able to come to an agreement with the owner to put an easement over part of the land to clear the trees – that took five years to happen. The FAA would not fund the runway project until those trees were cleared.”

Deck reports that the Airport’s Master Plan was last updated in 2014. “The big thing it calls for is continued development of hangars,” he says. “It’s also looking at the possibility of expanding the Airport. There are a couple of parcels next to the Airport that, at some point, the town could consider purchasing as a means of expanding some of its landside activity. But it’s not much. We run parallel to Chewonki Neck Road, which is the main feeder road into the Airport. There are three parcels between that road and the Airport. If the owners ever want to sell, and the town wants to, it can consider purchasing them. They’re close enough to the Airport, and if the economy improves, it could be advantageous, down the road, for some more hangar development.”

But, because the Airport butts up against salt marshes in two directions, there isn’t a lot of land available for economic development, and Tetrev says that it doesn’t actively market itself to potential businesses. However, there is a potential project on the drawing boards that should allow the Airport to reap some financial benefits. “The southside of the Airport, heading toward the Gulf of Maine and Atlantic Ocean is not all that developable for aviation purposes because of the terrain,” Deck explains. “But we are in the process of going through the design and permitting phases for a solar farm to go in.”

“We’ve been at it for about a year,” Tetrev shares. “The company we’re working with is Synergy out of Carlsbad, California. We’ve got about 45 acres that are developable. If everything goes well, we’ll be able to do that next summer, and it should work out quite nicely. The money we’ll get is off the land lease. Synergy will sell the energy; they’ll partner with the town and give the municipal buildings a special rate, while we get the benefit of the land lease.”

Williams says that Wicasset has been lucky over the years to have both dedicated employees and volunteer pilots that have helped move the Airport forward: “Erv brought his talents as a pilot and aviation planner; Rick comes from a Navy background – he was Executive Officer of the NAS at Brunswick. A couple on our committee have been general contractors who have a knowledge of how to make an airport run. We also have members of this Airport who volunteer for the Maine Department of Transportation Aviation Committee.”

“We’re open 24/7, 365 days of the year,” says Tetrev. “And we’ve got wonderful snow removal. Within hours of a major snowstorm, we are clear, so people can come and go as they please. Any time of year, it’s good here.”

WHERE: Near the Town of Wicasset in Lincoln County, Maine