Williamsburg Jamestown Airport – A legacy of family, flight, and fun

A legacy of family, flight, and fun

It was over five decades ago – 1967 – when a young, newly enlisted, Larry Waltrip convinced his parents to use the bulldozers from their construction company to create a runway so he could learn to fly. Before they had permission from the FAA or bordering neighbors, they flattened a strip on 200 acres of clay off Lake Powell Road, and the Williamsburg Jamestown airport was born. Of course, it wasn’t called that then, but what a difference 50+ years of devotion and hard work can make.

“This has been a family enterprise right from the beginning,” says Larry Waltrip, who went on to become the owner and President of the airport. “We just had a big celebration with over 1000 visitors from our local community. We had all kinds of static displays, an airplane flour bombing competition and many activities for the kids to do. We cooked over 325 pounds of barbecue and had snow cones, and everyone had a wonderful day – many visiting the airport for the first time. We take immense pride in being the oldest privately-owned publicly-used airport in the State of Virginia that is still being operated and run by the same people that built it.” 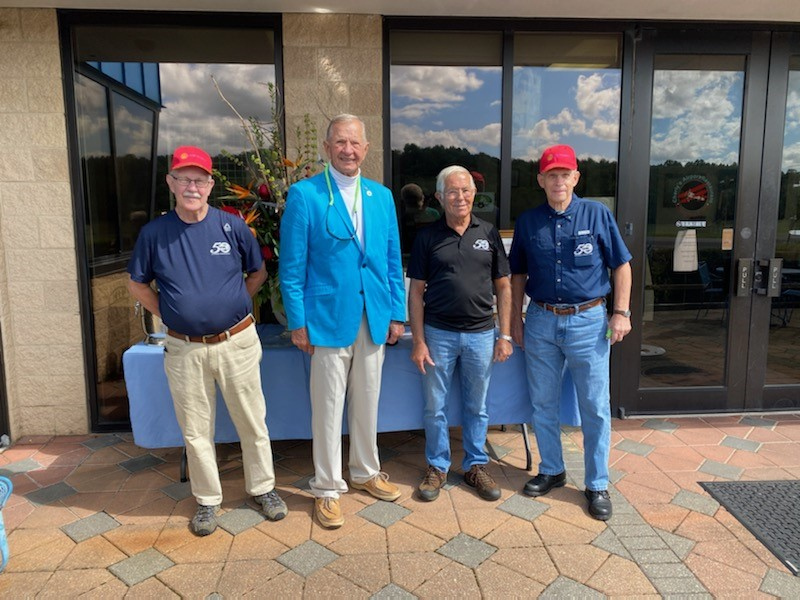 Amazingly, the Waltrip family wholly owns the airport and opens the facility to all who wish to use it. It is, first and foremost, a general aviation airport for the local folks who wish to fly and hangar their airplanes here. It has a 3204-foot runway and, as Waltrip put it, isn’t like flying into O’Hare, but it still serves a purpose. A family airport that is run for families, the airport has received some grants and loans to maintain the runways and aprons, but the hangars have been constructed at the Waltrip’s expense – and all airport revenue is cycled back into upkeep and development.

Over the years, the airport has seen plenty of famous encounters, and a lot of satisfaction for the Waltrips. Every Virginia Governor has landed at the airport, many senators too, as well as Janet Reno, President Clinton, Margaret Thatcher – not to mention the likes of Walter Cronkite, Merv Griffin, Neil Armstrong and Elizabeth Taylor. The airport has seen four astronauts call the airport home: Don Eiseley, Steve Robinson, and Frank Borman all had aircraft based here and David Brown learned to ﬂy at Williamsburg Jamestown Airport.

Waltrip muses, “We are surrounded by a lot of history in the nation’s Historic Triangle. We are within a mile, as the crow flies, of Colonial Williamsburg and the living museum, also Jamestown, which was settled in 1607. Yorktown, famous for the battle of Yorktown, the last major battle of the American War of Independence is less than 15 miles away. Bush Gardens Theme Park and Water Country USA are right next door along with a dozen world class golf courses, and all the local shops and restaurants… it is just a great place to fly into and have access to a lot of different things to do.”

When it comes to restaurants, one would be remiss not to mention Charly’s Airport Restaurant which has been around for just as many years and offers homecooked meals and desserts that have become famous both on and off the airport. It also is the only place to eat in town that offers a front-row patio view of takeoffs and landings. “The pilots have a $100 hamburger club membership,” says Waltrip, “and out of 1800 some restaurants in the United States, we were voted the number one restaurant in 2007 and number two in 2008. The restaurant is a real asset to us and has brought in many, many, people who fly and drive in to eat here. There are not a lot of places where you can fly in and get the old-fashioned hospitality of this airport – as well as treat yourself to a home-cooked meal, freshly baked bread, and delicious pie.”

Situated on 200 acres of land, Waltrip is always trying to figure out how to improve and grow next. He reports, “We recently put up a new decorative fence to keep guests safe from the busy taxiway and ramp. We expect approval to begin construction on a new hangar complex in the next couple of months, and we plan to do three more rows after that. All of those are leased and we will still have a waiting list. A new state highway into the airport was completed recently and that has helped with traffic, we also completed a $1.3M ramp and taxiway rehabilitation in 2019, and our popular conference room/meeting space on the second floor, used for everything from weddings, reunions, to corporate retreats, was renovated last summer. So, things are growing and improving.”

He is also thinking of adding more corporate hangers soon – but one of the priorities is going to be to increase both the restaurant and terminal office space. The kitchen right now is only about 15’ by 15’. “I would say it is the smallest restaurant kitchen in Williamsburg,” says Waltrip. “But we are still serving up to 100 people a day sometimes, and there are days when it gets up to over 200 when there are events out here and the weather is nice. The restaurant does a wonderful job, but we can make it easier for them if we expand it.” 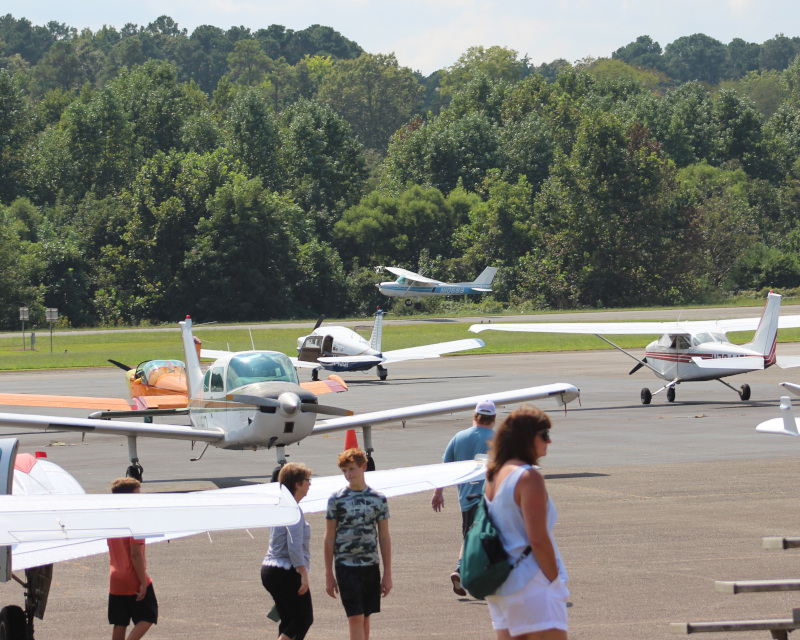 One of the more interesting partnerships at the airport comes in the form of the proximity to Williamsburg Landing, a premier Life Plan community. This upscale retirement complex boasts amazing features – but also makes dreams come true for those that wish to knock pilot’s licence off their bucket list. Waltrip is also planning on using an extra 30 acres the airport owns along College Creek to create a gated community with dedicated airport hangars – making this quite the thriving community.

“On the other end of things,” Waltrip shares, “we have always encouraged kids. I built a playground near the restaurant so that parents could come and eat lunch, maybe visit with their friends, while knowing their kids were safe in the playground. Well, those kids become interested in aviation, decide to fly one day, and then a lot of them grow up to become pilots. Headquartered here is the WASP program, (Williamsburg Aviation Scholarship Program) and with that, we go into the High Schools and recruit qualified kids that want to get their private pilot license and pursue a career in aviation. We educate them and pay for flight school at the Williamsburg Flight Center which comes in at around $11,000 invested in each kid. The current class has nine students from across the region here. They go on to fly for the military, or commercial, or corporate aviation. I bet we have started the careers of almost every kind of pilot here at the airport and I feel very honored to have been a part of that.”

There is always more to be done, in Waltrip’s mind, and he insists it wouldn’t be possible without his loyal, skilled and trusted team, two of which have been linemen at the airport for more than 15 years.  Between his three linemen, the new manager who joined this past January and Waltrip’s family members, they manage to keep up on the day-to-day stuff, as well as prepare for the future. The airport recently updated its PAPI lighting system, painted new taxiway and parking lines, and partnered with the local Ninety-Nine’s chapter to paint a beautiful new compass rose for pilots to update their compass settings. There are plans to also do more on the corporate side with a few corporate hangars to aid the many businesses/fractional ownerships flying in and out of the area for various reasons.

“It’s not really a ‘working/job’ place for me,” Waltrip laughs, “I enjoy it so much. But we do make a difference in the community and bring in hundreds of thousands of dollars to the community. And that will just keep getting better as we expand the restaurant, build the houses along the river, and install more hangars to meet the demand. The aviation industry is changing faster than it did the last 50 years, and we’re excited to greet what the next 50 years brings. This airport is a great place, and more people are coming to realize that.”

What: A family owned and operated general aviation airport

Where: A mile from Colonial Williamsburg, Virginia

Williamsburg Landing is the premier not for profit and accredited Life Plan Community. Only a Life Plan Community can provide the most comprehensive options for seniors today. From Independent Living to higher levels of care, this secure engaging community serves your social, financial and wellness needs. www.williamsburglanding.org