The Terre Haute Regional Airport – Airport of the year

Airport of the year

The Terre Haute Regional Airport is a civil-military, public-use airport, six miles east of Terre Haute, in Vigo County, Indiana. Originally called Hulman Field, the Airport dates to 1943, when ground was broken on a 638-acre site donated to the City of Terre Haute by local businessman, Anton “Tony” Hulman, Jr., who also bought the Indianapolis Motor Speedway in 1945 and brought racing back to the race course after a four-year hiatus following World War II. The reason for the creation of the Airport was because the city’s first facility, Cox Field, a commercial airport built in 1942, was denied transcontinental service by the federal government because of its small size.

With the assistance of Federal funding, the new airport was constructed and then dedicated on October 3, 1944. It consisted of three runways, taxiways, an apron area, and a terminal building. Shortly after its opening, TWA provided cargo and passenger service to the community. Cox Field’s U.S. Weather Bureau facilities and Civil Aeronautics Administration office was relocated to Hulman Field in 1946. In 1953, a new terminal and control tower were completed and the apron was expanded. In addition, Runway 5-23 was extended to 7,000 feet.

In the early 1950′s, a second airline, Delta C & S, began service. This service was short-lived and subsequently replaced by Lake Central Airlines in 1954. The Indiana Air National Guard established a base at the Airport in 1954, and the 113th Tactical Fighter Squadron, which is a part of the 181st Tactical Fighter Group, was stationed there. Cox Field continued to serve the community as a general aviation airport until its closure in December of 1959. In the early 1960′s, significant improvement projects were completed at the Airport. In 1961, an ILS (Instrument Landing System) was commissioned, and in 1962 Runway 5-23 was extended to 9,025 feet. In 1964, Lake Central Airlines began replacing DC-3 aircraft with Convair 340′s for passenger service. Early in 1965, TWA discontinued service to the Airport, but Lake Central increased service to fill the void left by TWA’s departure. Lake Central also began operating DC-3′s for cargo service. In 1968, Lake Central merged with Allegheny Airlines. 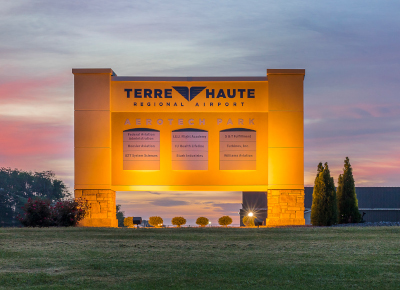 Britt Airlines, operating as Allegheny Commuter, began serving the Airport in 1973 and based its headquarters at Hulman Field. Until 1976, the Airport was operated for the City of Terre Haute by a four-member board of aviation commissioners. As the airport developed and its service area expanded, it became apparent that a more broad-based management organization was required. In 1976, the City of Terre Haute and Vigo County formed an Airport Authority, which is comprised of six members, with three members appointed by the Mayor and three members appointed by the Vigo County Commissioners. The FAA added advanced radar control systems and the terminal building was expanded by 1,500 square feet in 1977. Additions to the terminal building added 5,300 more square feet and Hulman Field’s name was changed to Hulman Regional Airport in 1981. Britt Airlines continued to operate in Terre Haute until the late 1980′s when it was purchased and service was ultimately terminated.

In 1998, the Airport’s name was changed from Hulman Regional Airport to Terre Haute International Airport – Hulman Field. The Airport’s secondary runway was extended to 7,200 feet in 1999.  Airline service was provided by Great Lakes Aviation, Ltd. doing business as United Express from 1995 through the summer of 1999. In 2005, the Base Realignment and Closure commission mandated the end of the flying era at the Air National Guard Base. On September 8, 2007, the 181st Fighter Wing flew their last training mission, and on May 3, 2008, the 181st Fighter Wing was re-designated as the 181st Intelligence Wing. Today, The U.S. Air Force uses Hulman Field for worldwide command and control of remote control surveillance aircraft. In addition, Indiana State University uses the Airport for their aviation programs.

The Terre Haute Regional Airport has 17 employees. Its operating budget is generated by a combination of FAA Grants and its designation as a TIF (Tax Increment Financing) District, which allows it to reallocate funds from increases in local property taxes. Currently, the Airport is home to 86 general aviation aircraft, and, according to Executive Director, Jeff Hauser, is planning to build several new hangars to try and “bump that number up to 100 in the next year or two. Right now, we’re getting ready to build some box hangars that we are funding,” he explains. “Our oldest hangar on the Airport is the Thompson Hangar, and because of its historic nature, we decided to go ahead and rebuild that, instead of building a brand new building. So, that is just about finished. In the next two weeks, we’ll be starting on the ground for the new hangars. By next spring, we’ll have at least three new 60 X 60s completed. We are also looking at someone being able to build their own and so some land leases,” he adds. “We’re talking with the Board, as this is a direction we’re looking at, as well.”

Long term, Hauser says that he is focusing on bringing more business to the Terre Haute Regional Airport. “We’re our own TIF District, so the more business that we bring to our Airport property, the more income it generates for us,” he explains. “Where we’re building those three 60 X 60s, we already have a plan to build three more within the year after that. On the west side of the Airport, we’re building pads for 80 X 80s for businesses, as well. So, for people to possibly use a land lease or us building the hangars, we want to build the whole west side of the area as more of a general aviation area. On the northeast side, we’re trying to keep that for education and business. Indiana State University has an unmanned systems four-year degree, there, that we’re trying to take advantage of.”

Hauser touts several characteristics that he believes make the Terre Haute Regional Airport a good bet for new businesses. “We sit right off of Interstate 70, and just in the past year, we had a bypass open around the city and it goes straight to a business/industrial park on the south side of Terre Haute,” he notes. “So, we’re going to try and leverage that for logistics. With the land that we have available, we’re going to try and start offering up some new incentives. Because of the convenience of us sitting right off the edge of I-70, we’ll try to open up our horizons to do some business out there.”

In fact, about 250 acres of Terre Haute Regional Airport property, designated as “Aerotech Park,” are located within an Airport Development Zone with Foreign Trade Zone capabilities, enabling companies to leverage incentives that would allow them to compete nationally and internationally. The Park has airside and landside sites available for long-term ground lease development. Other incentives can be facilitated through the cooperation of the Airport and the Terre Haute Economic Development Corporation. Examples of industries that the Airport could accommodate include, but are not limited to, corporate flight departments, aircraft maintenance repair and overhaul facilities, light industrial, manufacturing, and warehouse distribution.

Aerotech Park capitalizes on Indiana’s robust infrastructure, which includes: 41 freight railroads; 14 interstates including I-70, I-74, I-69, I-65, and I-80; and three ports within 120 miles, all accessible by rail. “Also, we’re very centrally located,” Hauser adds, in conclusion. “We’re within 200 miles of Louisville, Cincinnati, Chicago, St. Louis, and Nashville, with very long runways and a lot of ramp spaces. And we’re easy to get in and out of.”

Designated as the Indiana Airport of the Year in 2017, the Terre Haute Regional Airport looks as if it has many more outstanding years, ahead.

Check out this handpicked feature on Statesville Regional Airport – A viable alternative.

WHO: The Terre Haute Regional Airport

WHAT: A civil-military, public-use airport

Since 2011 Hoosier Aviation has been a thriving, General Aviation focused local owned business by valuing the satisfaction of its customers, and continuously providing True Hoosier Hospitality!

We provide five-star service without the high costs, while continuing to maintain the highest quality service to our general Aviation and DOD. 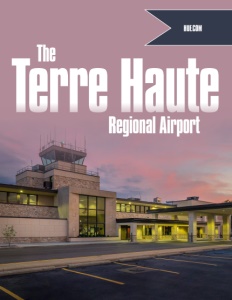