Business View Magazine interviews Ron Oberth, President and CEO of OCNI, as part of our focus on the Canadian nuclear industry.

The Organization of Canadian Nuclear Industries (OCNI) is the leading and trusted voice of the Canadian nuclear supply chain, actively promoting the production of safe, clean, and reliable nuclear electricity. Founded in 1979, OCNI is an association of more than 200 leading Canadian suppliers to the nuclear industry in Canada and abroad. Nuclear power provides more than 50 percent of electrical energy in Ontario and contributes over $6.6 billion per year to the Canadian economy, with export sales over $1.2 billion per annum. Canada is the world’s second largest producer of uranium at 10,000 tons per year. As its tagline states, OCNI is a proud champion of clean energy for a low carbon economy.

OCNI member companies, collectively, employ more than 12,000 highly skilled and specialized people who manufacture major equipment and components and provide engineering services and support to the 19 operating CANDU nuclear power plants in Canada, as well as to CANDU and LWR plants in offshore markets. OCNI companies also work on medical and other safe applications of nuclear technology. In addition to its focus on the expanding nuclear sector in Ontario, the organization advocates for the continued production of nuclear electricity in New Brunswick and encourages the use of nuclear energy in Western Canada.

Business View Magazine recently spoke with Ron Oberth, OCNI President and CEO, about the current state of domestic and international nuclear markets, and how OCNI is strengthening the thriving Canadian nuclear supply chain through innovation and leadership. The following is an edited transcript of that conversation.

BVM: Congratulations to OCNI on its 40th anniversary. Has the mandate changed over the decades?

Oberth: “Yes it has. When the organization was formed in 1979, the purpose was to represent the companies that supplied equipment and services to the major Canadian utilities, not the people who make the power, like Bruce Power and OPG (in those days Ontario Hydro). The Canadian Nuclear Association is the umbrella organization that embraces the power utilities– the nuclear utilities and the larger suppliers – but some of the smaller suppliers had separate interests from those of the utilities and they wanted to have a voice to support their needs.

“Initially, much of the effort of the association, in those days called OCI (Organization of Candu Industries), was to support the Candu projects in Ontario and the export of Candu to countries such as China, Argentina, and Romania. It has evolved over the years, especially with increased work in the domestic market, as our companies are going into life extension. I joined almost eight years ago, when the association had 130 member companies. Between 2011 and 2019 our membership has grown substantially to 230. We also changed our name three years ago, from OCI to the OCNI because in offshore markets, where companies are building other than Candu reactors, we didn’t want to be branded as just Candu suppliers, but as suppliers capable of supplying to the light-water reactors that are the dominant type around the world.

“Ontario is the focus of our activities right now, due to the major investments in extending the life of four units at Darlington Nuclear Generating Station and six units at Bruce Nuclear Generating Station. We also have been active in international markets. I’ve led 15 trade missions over the last six years because we always have to recognize that, when these projects in Ontario are largely underway and all the contracts are let, we also need to think about opportunities beyond our borders to keep our industry vibrant and the order books full. But in the last couple years, getting the Bruce and Darlington projects off to a good start has caused us to focus more of our efforts domestically and a little less internationally.” 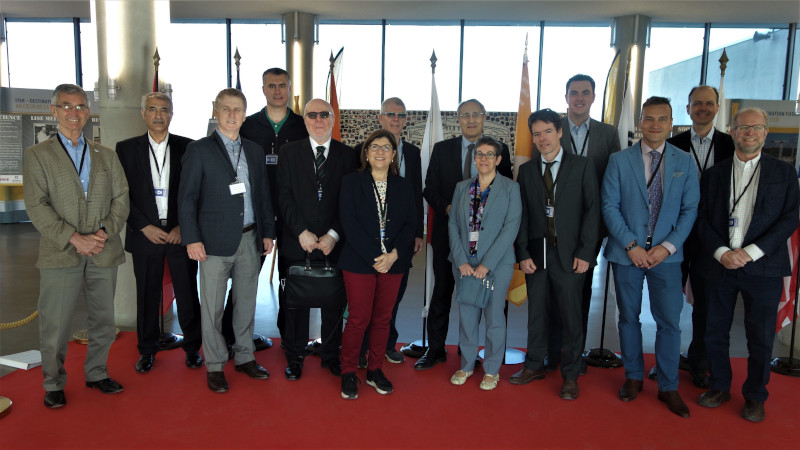 Oberth: “Our mission evolved into several areas. One of them is to help our member companies, particularly smaller ones, to interface with big domestic customers: OPG, Bruce Power, to a lesser degree, New Brunswick Power, because they only have one nuclear reactor in that province, and Canadian Nuclear Laboratories. We do that through Supplier Days – a trade show we put on at the customers sites, where member companies display their products and services and meet with potential and existing customers from our domestic utilities. 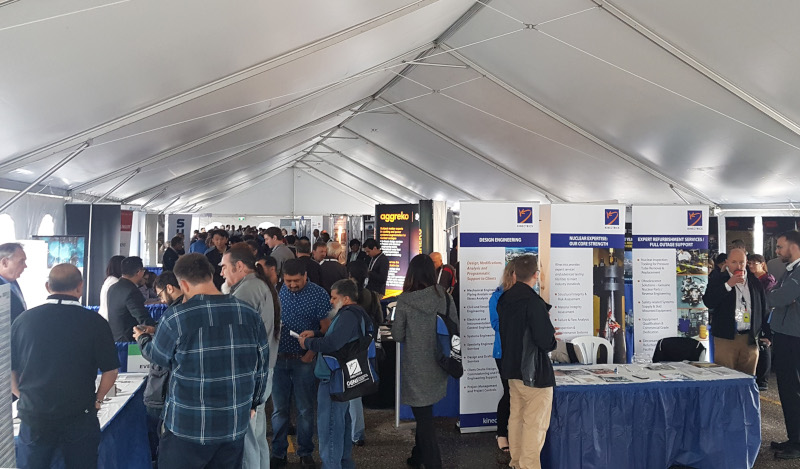 “We also help our members stay abreast of changes in regulations and standards, and assist with issues such as ensuring there are enough skilled tradespeople for manufacturers and installers of equipment. We call that Capacity Building – helping members be competent and have the skillsets needed to be good suppliers. The third thing is to take our companies along on trade missions to other countries. We have funding through a federal government program from Global Affairs Canada, called Global Opportunities for Associations, so when we lead a trade mission, we can help our companies recover up to 75 percent of their costs. This past year, we were successful in getting grant funding for $350,000 to support a number of trade missions. Offshore is always part of what we do.

“The fourth thing we do is advocate for continued use of nuclear energy in Canada. Our Local Supplier Engagement Program has been very important to that advocacy. In February, we did an event in Welland, Ontario at ASW Steel; they’re right at the beginning of the supply chain. It demonstrates to politicians and the public that our industry creates jobs across the province – jobs for people who make recycled steel, all the way up to companies that make very specialized components that go into the reactors, and, of course, the people who operate them in places like Peterborough, Cambridge, Mississauga, Cobourg, and further east in Arnprior. There’s a good company there called Nu-Tech Precision Metals that manufactures all the Candu pressure tubes. They’re really the heart of the Candu reactor system. 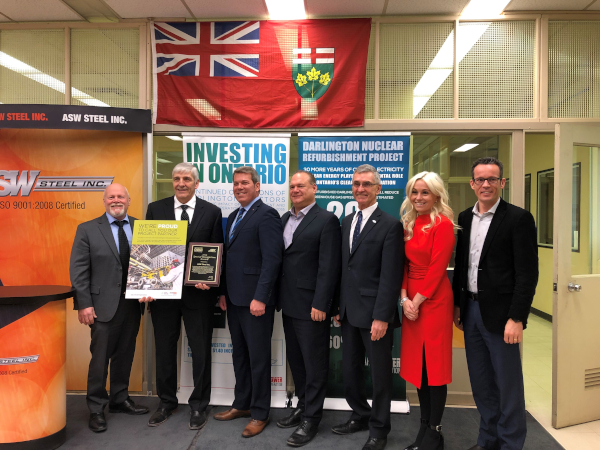 “A year ago, we opened our second office in Port Elgin, Ontario because Bruce Power will be operating for another 64 years, so we wanted to be closer to those customers. That office has been very helpful to Bruce Power in attracting more suppliers into Bruce County, because for all that investment, they want to see some benefit for the local communities.”

BVM: How is OCNI addressing the skilled labor shortage?

Oberth: “Finding skilled labor is a big challenge. When Bruce begins their life extension program, there will be three or four units at the same time being worked upon, which means an increased demand for welders, pipefitters, boilermakers, and electricians. The reason we were successful in getting S.T.E.P. (Skilled Trades Employment Pathway) funding through the Ministry of Training Colleges and Universities is that we demonstrated our program would make more young people aware of the importance of skilled trades and the opportunities available in our industry. 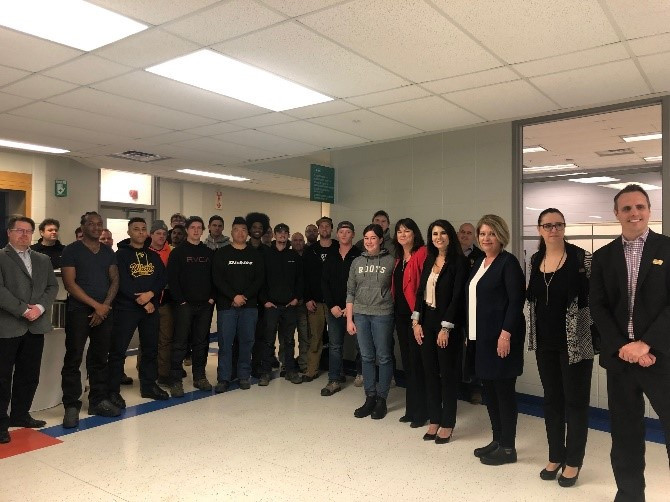 “We’ve had a lot of success with recruiting students; giving them a three-week training program, where they learn what it’s like working in a nuclear environment. We’ve worked diligently on that program for the last year, placing about 40 young people in companies that supply directly or indirectly to the nuclear industry. We have bursaries with several colleges, including Durham, Mohawk, Conestoga, Algonquin, and Georgian to encourage students who can’t afford tuition, to go to college, learn a trade, and join our industry. We also work closely with universities. At the University of Ontario Institute of Technology, we’ve established the Martin Wash Memorial Scholarship – two per year of $2,500 each, one for a male, one for a female, in the nuclear engineering department at UOIT. It’s in memory of Martin Wash, the first president of OCNI, who passed away in 2018. 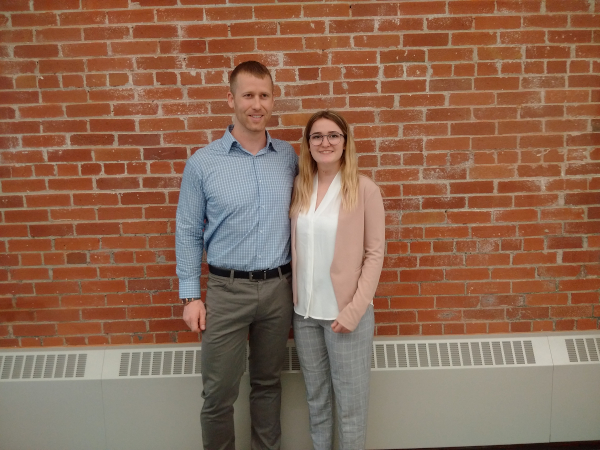 “We’ve also launched an Indigenous Engagement Initiative. Bruce Power and OPG have similar recruitment programs and we wanted to do our share. One of our unique advantages is that we have companies near large indigenous bands, like the Six Nations of the Grand River, so young people can stay closer to their home area and still find positions in the nuclear supply chain companies that are in the region.”

Oberth: “Climate change is one of the most serious threats facing our planet. We certainly believe that nuclear is one of the key tools we have to help address climate change because nuclear power plants don’t produce carbon dioxide the way coal-fired or gas-fired plants do. At the high level, nuclear has an important part to play. Some countries, like Germany, believe they can reduce their carbon footprint through renewables, alone. The short-term results have not been good because Germany has had to build new coal plants to replace the nuclear plants they’re closing down early.

“We’re very proud in Ontario that we’ve shut down all our coal units, and our electricity system is very clean – 60 percent of the energy comes from nuclear; 25 percent comes from hydroelectric; and a bit of wind and solar and some gas-fired plants that are at the margin. We’re a model jurisdiction as one of the first to get out of coal. Other jurisdictions have made commitments; I understand Alberta wants to by 2030, so we have an important role to play in the climate change program. To my mind, one of the real strengths of nuclear, and one of the reasons we see small modulator reactors (SMRs) replacing diesel generators in remote parts of Canada, is also making an important contribution to reducing the country’s overall greenhouse gas footprint.

“We are a small, dynamic team at OCNI, and we pride ourselves on doing a lot for our members at a modest membership fee. We’re known and respected throughout the Canadian nuclear industry as an organization that adds value to the industry, supports the industry, and supports its members.”

WHO: Organization of Canadian Nuclear Industries

WHAT: An association promoting the production of safe, clean, and reliable nuclear electricity