Brainerd Lakes Regional Airport – Portal to the Land of 10,000 Lakes

“We are a diverse airport that serves both the General Aviation and the Commercial Aviation needs in this community,” says Steven Wright, Airport Director at the Brainerd Lakes Regional Airport, a general and commercial facility located three miles northeast of the central business district of Brainerd, a city in Crow Wing County, Minnesota. “And we take both very seriously here and we are constantly improving to make it a better experience for our clientele.”

Improvement and growth has been a constant at Brainerd Lakes since the 1920s, when Henry Rosko built the first airfield in the region. By the 1930s, Rosko’s field could not be expanded to meet the growing demands of the aviation industry, and, in time, it was abandoned, while the city sought acreage east of Brainerd to build a larger, municipal airport. Crow Wing County was solicited as a partner, and in 1945, the city of Brainerd purchased about 900 acres on what is now Highway 210. Within this land, a large field was surveyed. 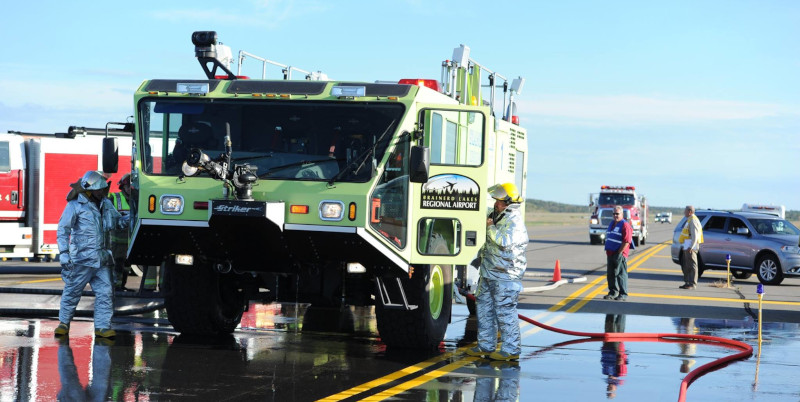 “The City of Brainerd and Crow Wing County knew the Airport had a much larger impact than just the city of Brainerd, itself, and so they formed a joint Airport Commission,” Wright continues. “Each invested half into the property that our current Airport sits on. That was done in 1943. The runways were completed in 1948 and we have had continuous commercial air service in our market since that year. We also have a large general aviation component rolled into that. For years, the general aviation side grew out of governmental services – a lot of power line and forest fire watch would be conducted out of the Brainerd Airport.”

In the beginning, North Central Airlines, formerly known as the Wisconsin Central, was the first commercial service to fly into and out of Brainerd. Their aircraft was a 10-passenger, Lockheed 10A and they offered one round trip per day, providing weather conditions were right. By the mid-1950s, North Central was a hot ticket. During the winter months, North Central had four flights per day, two north-bound and two south-bound. During the summer, air travel doubled with as many as 300 passengers per month using the service in the summer.

In the 1980s, runway 4/21 was realigned, lengthened, and widened, becoming 5/23, and a commercial service airline terminal was constructed. North Central Airlines became Republic, then Republic Express, before evolving into Mesaba Airlines-Northwest Airlink.  Daily jet service began after the merger of Northwest and Delta with SkyWest Airlines serving as Delta Connection. The 1980s also brought a new maintenance/ARFF building and fire truck, plus the addition of full-time staff, including an Airport Manager.

These days, the Airport is also home base to some 80 general aviation aircraft used for private, recreational, governmental, and commercial purposes. “The region grew over time to where it is one of America’s best summertime vacation destinations, with the growth of aviation and corporate aircraft more on a leisure basis than a business basis,” says Wright. “The Brainerd Lakes Regional Airport is America’s portal to the many lakes surrounding the Airport. The development along those lakes attracts families and business individuals throughout the country to come and vacation here or even hold conferences at one of the many resorts in the surrounding area. Local businesses are also realizing the benefits of locating their corporate aircraft as well as the daily connections offered through the scheduled airline.”

During the last recession, there was a lull in terms of hangar occupancy, but Wright reports that the Airport is just at the point where its spaces are now filled – a combination of airport owned hangars, which it rents, and private hangar facilities, built by individual developer/owners. Other Airport users include the Department of Natural Resources Tanker Service, two helicopter ambulance services, the Civil Air Patrol, and Brainerd Helicopter Services.

“NorthPoint Aviation is the Fixed Base Operator and partners with the Airport itself employing a base of seven people,” says Wright. “Among the Airport and Airport tenants, we employ about 90 people that call the BRD their home. We rely on funding from both the City and the County, but 2/3 of our revenue comes from the operation of the airfield, itself.”

“One non-aeronautical business we have on the field is a full-service restaurant,” Wright adds, “which is very unique to this Airport. For years, it served as a lunch counter in support of the commercial airline activity. Over time, that business has transitioned into a full-service restaurant with all three meals served per day. Pilots and passengers fly in for more than just burgers and locals grace the establishment as well.”

Regarding competition in the commercial realm, Wright says that Delta Airlines, operated by SkyWest, offers commercial flights to the Twin Cities, daily, and there really is no competition in this market from other airports as Brainerd Lakes’ location is all the incentive people need. “People want to fly in here because it is fast, convenient, and quick; they get off the aircraft and they are on the golf course or at their cabin within minutes of arriving.”

“Where there is a lot of competition,” Wright notes, “is on the general aviation side. Minnesota has invested heavily into general aviation and we have a lot of airports within the state. So, even within our region, there are ten different airports – from private grass strips to fully-served paved airports – for aviators to choose from.  Smaller airports have an ability to offer cheaper rates to those general aviation pilots than what we can do.”

“But that works to our advantage as well,” he continues, “because we have the commercial side as well; BRD has  two precision runways over 6,500 feet monitored 18 hours per day, complete with airport firefighting and maintenance crews. And in the wintertime, they are completely plowed providing a level of redundancy for approaching aircraft. The Brainerd Lakes Regional Airport is the Airport for central Minnesota especially for the growing number of larger corporate aircraft such as Gulfstream IV’s and Canadair Challengers. So, there is a definite benefit to Fly BRD. Our GA owners and operators are taken care of. They have a reliable Airport centered in the middle of God’s Country where they can keep their schedules because of what we offer.”

Meanwhile, no Airport can long maintain its prominence without constant maintenance and upgrades. In the mid-’90s the Airport administration realized that having one long runway limited wind coverage; some aircraft were not able to use that one runway in some of the higher wind scenarios. And so, they started doing the studies and getting all of the environmental documents competed, in order to undertake a new runway construction project – 7,500 feet in length and 150 wide – which was finally completed in 2006.

“This became our new primary runway,” Wright notes. “So we have two great, long runways, our airfield is completely renovated. What we are planning on over the next 20 years is growth from the building area out to that new runway. It is served by one taxiway and so, the new Master Plan is going to improve airfield circulation. We are planning on adding Taxiway D that will allow our east hangar area to taxi out toward RWY 16/34, which should improve circulation for our visiting corporate jets. We’re looking at a pretty big price tag – about $4.4 million. We’ll pay for those projects with federal, state, and local dollars and we try to take advantage of any improvement funds we can. So, that will be the next twenty years of our development according to the Master Plan.”

WHAT:  A general aviation and commercial airport

WHERE: Three miles northeast of Brainerd, a city in Crow Wing County, Minnesota