Business View Magazine interviews representatives from the Deer Park Municipal Airport, as part of our series on regional American airports.

The Deer Park Municipal Airport is city-owned, public-use, general aviation airport located three nautical miles northeast of the central business district of Deer Park, in Spokane County, Washington. It was originally built in 1944 as part of the World War II effort, with three 6,100-foot runways that were built to handle the largest planes then in existence, such as the B-29 Superfortress, and others contemplated in the foreseeable future.

The Airport wasn’t used extensively during the war, which ended a year later, nor did it witness much aviation activity during the immediate years afterward. In fact, the facility was mostly used as a local drag strip. In 1959, however, in the midst of the Cold War, the U.S. government selected the Deer Park Airport as an installation site for one of its Atlas ICBMs (Intercontinental Ballistic Missiles). The City Council balked at the military’s desire to place it right in the middle of the runways, and, instead, offered property to the northeast of the active aircraft movement area. The missile was installed, but later decommissioned in 1965, when the generation of Atlas missiles was replaced by the Titan II and the Minuteman.

Aviation uses at the Airport gradually grew over the following decades. “About 25 years ago, we started putting significant effort into improving the Airport’s infrastructure – the pavement, getting instrument approaches here, and really making it a first-class, regional airport,” says former Airport Director, Penni Loomis. In fact, over the past two decades, several million dollars in federal and state airport aid grants have been awarded to the City of Deer Park, allowing it to rebuild two of the original runways and upgrade its navigation aids.

Today, the Airport is the home base of 117 GA aircraft, two maintenance and restoration shops, and one flight school that train pilots from private licenses through to instrument and commercial ratings. Indeed, flight training from Spokane area airports comprises a significant portion of the Airport’s operations. Deer Park also serves as a fire tanker base in the summer fire season, offering the surrounding community quick response to fire events.

Although owned by the City of Deer Park, the Airport has been contractually managed for the past 22 years by Partner Enterprise LLC, and today is managed by Schultz’s Aviation LLC, with Darold Schultz, the current Airport Manager. “We’re rather unusual,” says Loomis. “There aren’t very many airports in the country that are managed by contract individuals as opposed to city employees, and this is one of them. And that has certainly worked out very well because contractors tend to not necessarily make their work days from eight to five. Darold has come out all hours of the day and night to service jet traffic coming in or the fire planes.”

Schultz reports that while there is still a “huge waiting list for hangars,” at Deer Park, construction has picked up, recently. “The Airport strictly leases the ground and then individual owners or private developers take it from there,” he explains. “In the last few years, we’ve added several new buildings. We had a group build a 140X140 hangar and they based a Falcon 900 there. They are planning to build extra buildings – more large hangars for jet traffic. We also have two smaller hangars – one has completed construction, one is almost complete. The Airport itself, with the FAA and the Washington State Department of Transportation Aviation grants, has added a large taxiway. We have another in the works and additional ramp space.” Schultz adds that his long-term agenda includes adding more light to medium-size jet aircraft while continuing to remain an inviting place for small, GA aircraft.

Unlike some regional airports that double as general business parks, Deer Park has no non-aviation businesses on property. But it is located conveniently, in fact, right across the street from a business and light industrial park, with many tenants who utilize the Airport’s facilities and services.

“We have over 400 acres over there of developable land and much of it is already serviced with infrastructure,” says Loomis. “And we’re working, right now, on getting the basic infrastructure – roads, water, sewer, sidewalks, and so forth to the remaining 125 acres. So, we anticipate that this is going to be a tremendous growth opportunity – not only for the industrial park having proximity to the Airport, but visa versa.” The Airport, itself covers some 1,600 acres, so there is ample room for growth within its perimeter, as well, as time goes on and the local economy continues to expand symbiotically.

Schultz believes that Deer Park, like all of the other small airports in the region, has certain unique qualities that set it apart from the others. “We are really a unique airport,” he observes. “And we don’t view ourselves in competition with other airports.” Loomis agrees: “We really do complement the other airports in the area. There are folks who like to utilize specific airports. We all have different personalities and, I think, that’s part of the attraction. For example, we are in an excellent geographical position, here, especially for training and instrument approaches. And we often have very favorable weather when other airports are fogged in. So, there’s an attraction for training and the opportunity to use this airport year round, weather-wise.”

Another aspect of Deer Park’s personality is its high level of customer service, which in the end, is usually the most important attribute any business can have. “You couldn’t find a more friendly, service-oriented airport,” Loomis states. “We’ve always taken good care of our customers, and I think that’s a critical thing we’ve always tried to advocate, here. And Darold would welcome calls and inquiries about land and hangar development. We would be very happy to entertain that.” “Absolutely,” says Schultz.

Check out this handpicked feature on Paso Robles Municipal Airport – Serving a variety of users. 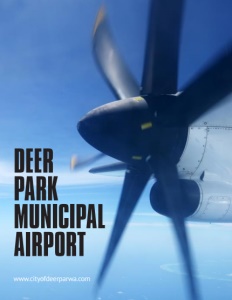