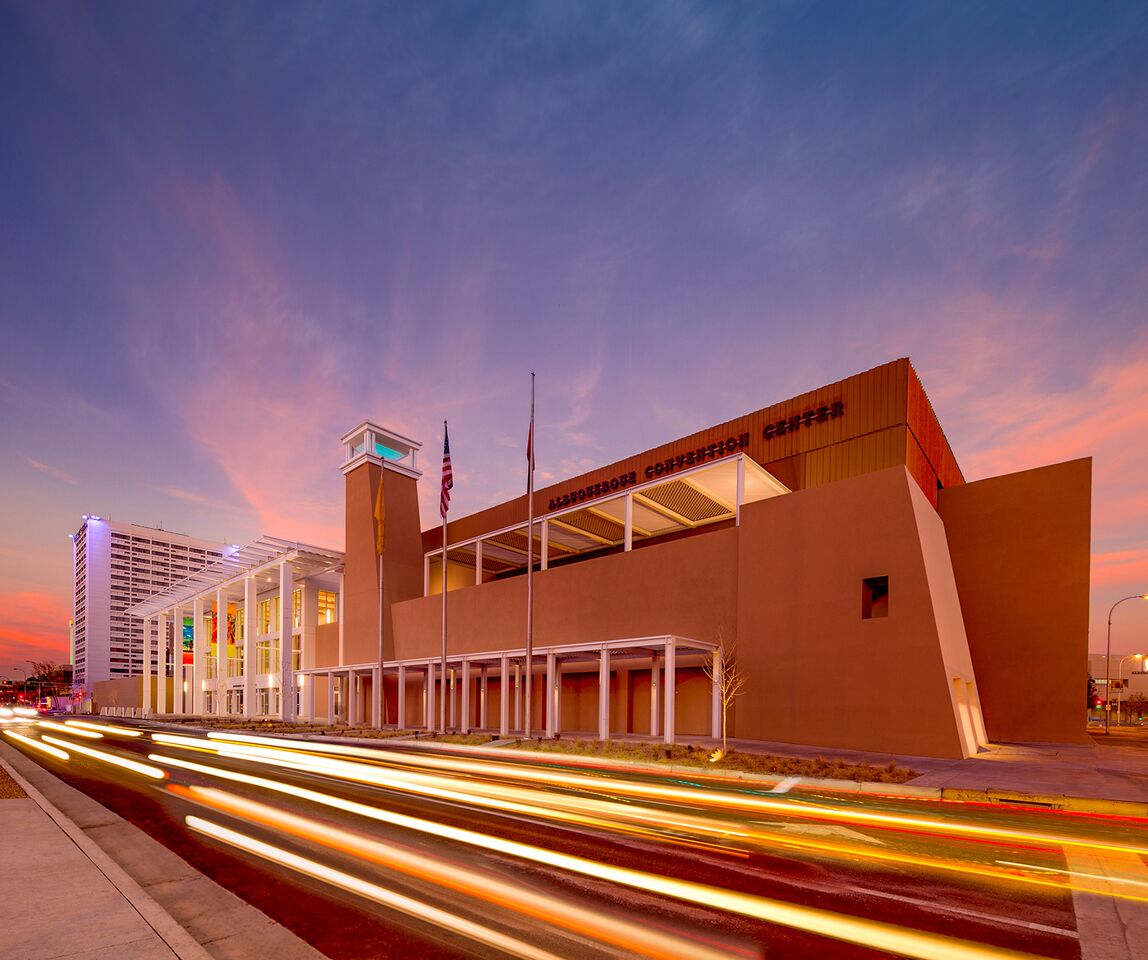 Business View Magazine interviews representatives from the Albuquerque Convention Center as part of our series on American convention centers.

In the heart of the American southwest, in the upper edges of the high Chihuahuan Desert, between the Rio Grande River and the Sandia Mountains, sits the City of Albuquerque, New Mexico. In the “Land of Enchantment,” it’s a particular place of stark and colorful beauty, where the sun can shine up to 300 days a year. It’s also a place rich in Native American, and Spanish American, history and culture.

In the center of Albuquerque, a city of some 560,000 souls, sits the Albuquerque Convention Center (ACC), which, according to its General Manager, Jose Garcia, architecturally and culturally, represents the best of the southwest – its people and its surroundings. “When you’re in the Albuquerque Convention Center, you know you’re in Albuquerque,” he asserts. “If you take a look at convention centers across the board, they can be in Anytown, USA. We carry the theme, the culture of being in the southwest, of being in New Mexico.”

The ACC plays host to an average of 30 major events a year, says Garcia, backfilled with another 350 local and regional proceedings. “Local and regional events make up the bulk of our business. When you look at our national events, our association trade shows, and our corporate trade shows, they reflect various industries – science and technology, education, medical – it’s pretty well distributed across all sectors. But association business is our niche.”

The first part of the ACC, the west complex, was completed in 1972, near the location of the city’s old Civic Auditorium. It consists of the 2,350-seat Kiva Auditorium, which is used for music concerts, Broadway and other stage shows, as well as special events; three ballrooms; two exhibit halls; and 22 meeting rooms. “In 1992, the east complex came online,” Garcia recounts. “We had two headquarter hotels built – presently called the Hyatt Regency, and the Doubletree by Hilton – and that created demand. The east complex doubled the size of the Convention Center at another 106,000 square feet of exhibit space, a 750-space parking garage, and another 11 meeting rooms.”

The largest exhibit hall in the ACC is the Fran Hill Exhibit Hall with a capacity of over 9,000 event goers. The Hill Exhibit Hall has also doubled as a multipurpose sports arena, and is the home of the University of New Mexico Lobos indoor track and field, and Duke City Derby roller derby teams. It is also used for concerts, trade shows, graduation ceremonies, and other special events. It has a removable, indoor track, as well pits and facilities for shot put, pole vault, and high jump events. The ACC has hosted the USA Indoor Track and Field Championships since 2011, and the 2014 NCAA Men’s Division I Indoor Track and Field Championship.

“In 2013, the first phase of a $25 million renovation took place; a year later, phase two; and then, just recently, we completed phase three,” Garcia adds. “The primary funding for the renovation came when the City of Albuquerque refinanced the debt on the Convention Center. It freed up the money so they could bond against it and put it back in the form of a renovation.”

One significant upgrade during the recent renovation was a lighting retrofit. “We went from a fluorescent, incandescent model to a state-of-the-art, managed Lutron system with LED lighting,” Garcia relates. “And in our exhibit halls, although they haven’t been retrofitted to LED, the lighting has been designed to accommodate high definition filming. We have sporting events that are shown on television in HD. In addition, the pipeline for our internet bandwidth for data, if not the biggest, is easily in the top three. We have a facility-wide, managed wireless system; as an event ebbs and flows throughout the building, the technology sends the resources to where the folks are at, so they can use the Wi-Fi.”

Another recent upgrade was a million-dollar facelift of the Hill Exhibit Hall. “The acoustical panels were redone and it’s probably one of the most unique exhibit halls in the country,” Garcia maintains. “They have iconic images of what Albuquerque is – everything from native dancers, to mariachi bands, to vistas of our mountains and our river.”

Finally, Garcia reports that the Center is embarking upon a $5 million renovation of Albuquerque’s Civic Plaza, which, in 2014, was turned over to the SMG Corporation, the ACC’s management company. “It will include new, high-tech water features, some additional shade structures, a playground, and large format television so we can have television programming during the day, i.e. showing a World Cup game, a Super Bowl, when the Lobos play their rivals out of town, and things of that sort.”

On the sustainable energy and environmentally-friendly front, the ACC is mindful of the impact of its 600,000 square-foot space on the environment, and has taken a proactive approach in fighting waste and promoting green practices. “In our kitchen, we compost all leftover food,” says Garcia. “We use compostable or recyclable disposables in catering and the concessions/retail program. Building-wide, we have single source recycling and that includes glass. I bring up glass because in New Mexico, we don’t have very dynamic glass recycling, but the Convention Center took the lead in arranging to have glass recycled. There is a cost to it, but we have now become a recycling center for the entire downtown for glass, which we upped to other things like cardboard and plastic.”

“Our landscaping is water-efficient for the arid environment of the high desert,” he continues. “Our restrooms are all water-friendly with low flow toilets and faucets. With our lighting retrofit, that energy consumption has gone down. The next step for us will be to get onto some sort of solar or wind program, however there needs to be some conversation about where we would put solar panels or wind turbines. Those conversations are in the works, but there is no timeline yet for any sort of implementation.”

Brian Hatchitt is the ACC’s Director of Sales & Marketing. He describes the Center’s approach in enticing potential clients: “We focus on the city, state, and regional assets that we have in New Mexico that differentiate us from other markets,” he says. “Convenience is a huge thing – we’re five minutes from our international airport, and we’re dead center in the heart of downtown. So, when it comes to offsite activities and the hotels that support the Center, we’re right next door. We have easy access to things. We’re kind of a big small town.

“Our climate in New Mexico makes us an ideal destination for outdoor events, activities, festivals, and rallies. And we’re rapidly becoming iconic for food and beverage. The brewing industry is huge in Albuquerque and that’s getting us some national and international attention. And we have some of the oldest wine making regions in the country, here in New Mexico. So the epicurean side of the state really shines through. And, we’re a melting pot in New Mexico; we have a tremendous amount of cultural diversity that makes us a unique and comfortable destination.”

Garcia elaborates on the cultural aspects of the ACC that makes it unique and uniquely New Mexican. “We house the city’s public art department,” he reveals. “This means we are now a quasi gallery. We have world-class art throughout the entire facility – sometimes upward of 200 pieces. And very soon, we’re going to have a world-renowned fresco artist by the name of Frederico Vigil start a fresco in the Convention Center. He lives between Albuquerque and Santa Fe and he’s done frescos all over the world. We’re looking forward to this four-and-a-half-year project that is going to be focused on the wine culture of New Mexico. We are a unique convention center because we resemble the place that we are.”

Finally, Garcia stresses that the success of the ACC rests solidly on its 39 regular, full-time employees, as well as its 100 to 150 part-time, on-call, and as-needed workers. “The staff and the employees are second to none,” he declares. “We don’t consider ourselves as employees; we are consultants – an extension of our clients and their teams. That model has led to the execution of every single event.”

Hatchitt adds that the network of hospitality partners in Albuquerque that support the ACC, and of which it is a part, is likewise “second to none, in terms of the care that is taken to provide a one-of-a-kind experience for guests, business travelers, leisure travelers, and convention attendees, alike. It’s a very unique and strong hospitality community and the Convention Center is right at the crux of it.”

WHO: The Albuquerque Convention Center
WHAT: A convention and exhibition facility
WHERE: Albuquerque, New Mexico
WEBSITE: www.albuquerquecc.com 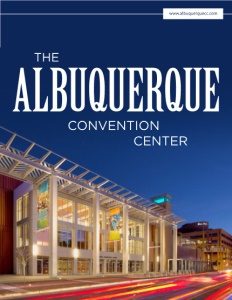