Country close to the city

An inclusive, caring community with a unique rural-urban identity, the Town of Whitchurch-Stouffville, Ontario places the needs and wishes of businesses and residents as top priority. Its slogan, “Country Close to the City” perfectly represents the town’s location – only 14 kilometers from the northern border of Toronto, and bordered by Richmond Hill, Markham, Aurora, and Newmarket, with a collective population of 715,000 people. Whitchurch-Stouffville embraces its rural roots and is haven for many from the congestion of multi-lane highways and shopping centres – a welcoming country home.

Iain Lovatt, Mayor of Whitchurch-Stouffville, Ontario was elected in October 2018, and immediately went into action to wake up the town’s “wait and see” attitude. The result is an invigorated community hovering on the cusp of great possibilities. Business View Magazine recently spoke with Mayor Lovatt about current and future economic prospects and projects. The following is an edited transcript of that conversation.

BVM: Can you give an overview of the vision you started out with as Mayor?

Lovatt: “Well, it’s probably good to note that we had a very challenging four years of previous council and there wasn’t a lot of activity taking place because of some political turmoil happening in town. My personal opinion is that development money went to the sidelines until after the Oct. 2018 election to see how the results would play out. If there was a change in leadership, there would be a huge entry into the market and that’s what we saw when I became Mayor. By March of 2019, there was almost $700 million of new development interest that had come through my office. A lot of that was multi-unit townhome and mid-rise applications, which is what we really need in our community to address affordable housing issues. Condos are selling for a lot less than single family homes.

“In my 100-day action plan, bringing unity to Council and our senior director team was my first priority. I worked really hard from the very beginning to make that happen. One of the first things we did as a council that greatly helped unify us and our vision was we developed the Strategic Plan with all the senior directors and managers in the organization. That was an amazing process. We ratified the Plan in the spring, and launched it to the public.”

BVM: What type of development is on the agenda?

Lovatt: “A lot of our focus is opening up the commercial and industrial tax base in our land development on the 404 series highway and the unused lands we have from our southern boundary up to Davis Drive. In our inaugural Council meeting in January, we asked the province of Ontario to designate Gormley area as a provincially-significant employment zone. It’s currently in the Oak Ridges Moraine, so there are obvious restrictions because of that, but we desperately need these lands opened up to see our tax base balance out.

“Ninety to ninety-five percent of our tax base is carried by residential. We need to get that down to 75 or 80 percent and aggressively go after economic development. Whitchurch-Stouffville is predominately rural, and roughly 75 percent of the population lives in Stouffville in the southeast corner of the municipality where our services are. But it’s too far from the highway for businesses; they want to be in Gormley, right on the 404. For the past 30 years, it’s been light industrial and dry industrial. But we’re starting to see corporations looking to relocate head offices, and companies that want to be right there.

“Two things are holding us back: the Oak Ridges Moraine Countryside designation and the other issue is servicing the area. We’ve been working tirelessly, lobbying the provincial government on this. We need servicing brought up there from Markham (half-a-concession north of our border), and, hopefully, the lifting of the Oak Ridges Moraine designation on three specific areas.”

BVM: What other challenges are you facing?

Lovatt: “I’m working with my counterparts on Regional Council and directors of York Region Transit to bring better service into Stouffville, as well as Metrolinx. And we have broadband issues: YorkNet (owned by the York Region) is laying dark fiber down and we’re looking at ways we can do fiber swaps with third-party companies like ViaNet to service our customers in the rural areas.

“The other big challenge was rebuilding our brand. We had four years of struggle and a negative reputation in the marketplace, not just from a development standpoint but also from an HR side. We lost almost 40 percent of our workforce through people not wanting to be in a bad work environment. What a difference an election can make. One of my goals was to make us a municipal employer of choice and it’s starting to happen. We have a phenomenal team, vacancies are being filled quickly, and we’re rebuilding our reputation as one that we can be proud of.

“On another front, the overarching cloud in Ontario is the governance review and whether or not municipalities will be amalgamated. So, I wanted to create a vehicle for our community that would last, regardless of what happened in a governance review. And that is the Whitchurch-Stouffville Legacy Fund. One of my great joys as Mayor is the ability to leverage my position to raise charitable money. We raised $100,000 at the Mayor’s golf tournament, and $90,000 at the Mayor’s Gala for the Legacy Fund and those will be annual events. Over four years, that’s close to $800,000 for service groups and charities within our community to apply for funding. We have an apolitical board of directors that will get together three times a year, vet the applications, and write cheques. It’s about benefiting our community in perpetuity.” 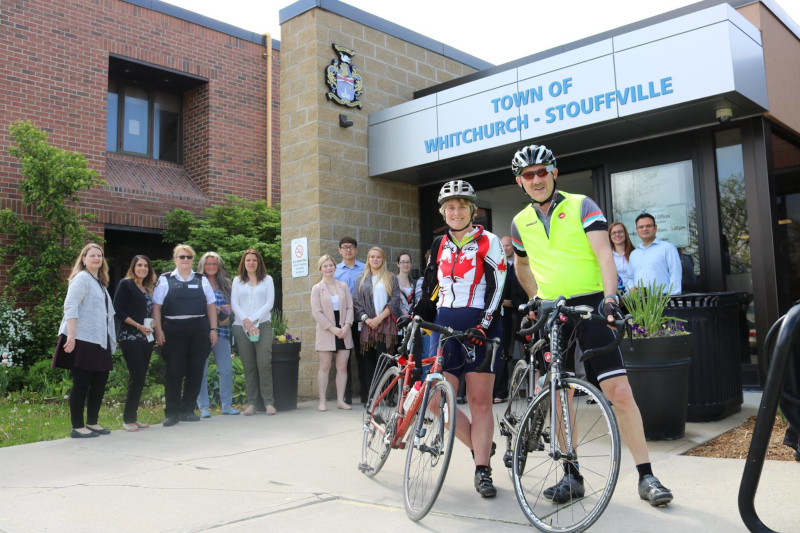 BVM: What are the main economic drivers?

Lovatt: “We’re primarily a bedroom community – 70 to 80 percent of our residents get in a car or on the GO Train and leave us, every day. We’ve been a farming community for hundreds of years, but we’re seeing the transition. And farm and greenfield areas are being sold to developers. We do have a couple large businesses in town that employ 80 to 100 people, but we haven’t found an identity yet that we can really promote from an economic development standpoint. We’re working on that. When we are successful in having the Gormley lands open up, we’re going to see millions of square feet of commercial/industrial come to that area. I’ve had two different investment groups in my office looking for enough land to build half-a-million to a million square feet of warehouse space and we don’t have it in the serviced urban area.

“People live in Stouffville because of the lifestyle and they like that you drive through farm fields in every direction to get to us, and when you hit the town, all the amenities are here that Markham would have, with the exception of a big mall. So, one of my goals, working with our Economic Development Officer, is to connect our past – seeing agriculture as a huge economic driver – and looking towards the future with new technologies and vertical farming, and really focusing on incentivizing companies that want to grow food here. We have thousands of acres of Class A farmland that can be leveraged. Our weather patterns and growing seasons are changing rapidly, so when we had an application come in for 140 greenhouses, we jumped all over it. That’s exactly what we want is people growing year-round.”

BVM: Is downtown development on the current project list?

Lovatt: “Our downtown needs an overhaul, but we have to get all new infrastructure to support redevelopment of what we have, and new development. The province has designated the area around our GO Station on Main Street as a Major Transit Area and changed the density targets from 50 to 150 persons, or jobs, per hectare. So there’s a huge opportunity to redevelop mid-rise buildings around the GO Station and look at creating a complete community down there, where you can work, live, and shop. We need density brought into the downtown to support the businesses and make it really attractive for new investment.

“Geranium Homes built a beautiful condominium building, architecturally designed to fit the downtown, and demonstrated that this kind of a vision can work for our community. Now, people are interested in buying up blocks of buildings down there to knock down and rebuild. My approach to them is to keep the 19th century facades and build new buildings behind them.”

BVM: What are Whitchurch-Stouffville’s objectives for the future?

Lovatt: “From an environmental standpoint, we want to protect the majority of our greenspace on the Oak Ridges Moraine. We’re not looking at becoming a sprawling city; we’re going through visioning exercises that will speak to planned, appropriate growth, so we can hit our provincial targets that have been set. But we need to take a proactive approach in looking at complete communities. We have the ability – a council with a vision, a brilliant staff to execute it, and a development community that actually wants to deliver on it. So the conditions are really exciting for the future of what has been a sleepy community.”

Municipal Maintenance has been in business over 25 years. We strive to satisfy our customers approaching each contract with professionalism. With several divisions such as grounds and landscape maintenance, snow maintenance, litter pick up, construction restoration and concrete we continue to serve the GTA.