Town and County working together

Business View Magazine interviews representatives of the Town and County of Antigonish, Nova Scotia for our focus on Economic Development in Canada

Dotting the northeastern corner of Nova Scotia, Canada on the Northumberland Strait is a quaint university town known as the home of the oldest-running Highland Games outside of Scotland. Antigonish is a name that refers to both a Town and a County, and throughout both there’s the warmth of East Coast hospitality, the spirit of cooperation, and strong ties of friendship to build a safe, healthy, and resilient rural community.

The Town and County are  one of the few municipalities in the region to have experienced positive growth outside of the Halifax area, and with the pandemic ushering in an increased comfort level with remote work, it’s seen a significant uptick in housing demand as a result. 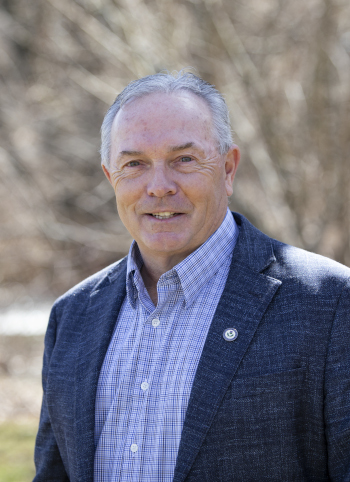 Owen McCarron, Warden for the Municipality of the County of Antigonish

“COVID-19 has certainly shone a light on the opportunity to come into smaller communities like Antigonish,” says Owen McCarron, Warden for the Municipality of the County of Antigonish. “Our building permits are up substantially, and we’ve put in a lot of groundwork as far as infrastructure upgrades.”

The Town of Antigonish and the surrounding County continue to work on ways to encourage population growth in their area. Recently, the Municipality erected a new water tower and completed a critical water line looping project. “We’ve been continually expanding our infrastructure in anticipation of that increased push on our population,” McCarron explains. Given the Town’s limited footprint, a lot of the growth they’re looking to accommodate is being planned for the fringe area of Antigonish, just outside the Town’s boundary. “We’re fortunate to be part of a region that’s thriving, especially in a rural province like Nova Scotia,” says Town Mayor Laurie Boucher.

The County also has built strong relationships with the local First Nations Community, Paqtnkek Mi’kmaw Nation. Over the past five years, we have gathered our elected leadership and senior staff together to co-learn, to build our relationship, and discuss areas of collaboration. In 2018, Paqtnkek Mi’kmaw Nation and the County of Antigonish celebrated the signing of our historic Friendship Accord, Anku’kamkewey. Anku’kamkewey is an expression of commitment to collaborate and support one another as neighbors on community, economic, and social development.

The area has strong ties to the land and sea and Antigonish is better known for its fishing, forestry, and farming. Its major stakeholders are the university and hospital, while in-town businesses are mostly the offspring of its small-scale economy.

Located a 15-minute drive from the ocean in any direction, Antigonish is also home to St. Francis Xavier University (StFX). A primarily undergraduate institution of around 5,000 students, StFX is known for its national outlook, with over half its student population coming from beyond Atlantic Canada. “StFX is a highly rated university across the country,” McCarron says. “Their ability to keep the campus open to safely hold in-person classes amidst COVID is truly a reflection of the tight-knit relationship that our community’s students share. Just another excellent reason for people to come here. And we’ve got a very good hospital, St. Martha’s Regional, here as well.”

Like many communities across Atlantic Canada, physician recruitment and retention has been a challenge in Antigonish. The Town and County, alongside the St. Martha’s Regional Hospital Foundation, have taken this challenge head on by forming an Inter-Municipal Agreement to create a Community Navigator position. This role has already seen some success in the community with new specialists and their families already setting down roots in the community.

“Restaurants are also very big here, especially in the Town,” says Boucher, picking up the thread. “We have two new craft breweries that are currently setting up shop in Town. We also have Coldstream Distillery distribution center that just opened last year and Steinhart Distillery in the County that has received international acclaim. Our Farmers’ Market attracts hundreds of visitors from across the Town and County every weekend. What we’re noticing is that a lot of people living in our area are very socially conscious, and what COVID has done is highlighted the need for our independence. At least three of our restaurants buy produce, meat, and other supplies directly from local farmers. We’re very lucky to be connected to such a forward-thinking community where people are willing to support local, whether that’s our independent farmers, artisans, or taking advantage of our unique shopping district. Antigonish is lucky to be home to such unique shops from our hometown staples that have been around for decades to newer shops being opened by keen young entrepreneurs.”

From an accessibility aspect, Antigonish is stepping up and putting in the effort to remove barriers to make the community more accessible to everyone. Together with Upland Planning + Design and RHAD Architects, the Town is  developing an Accessibility Plan in line with Nova Scotia’s Accessibility Act. “The planning and implementation will take time, but staff and Council remain committed to seeing the plan through for the betterment our community,” says Boucher. 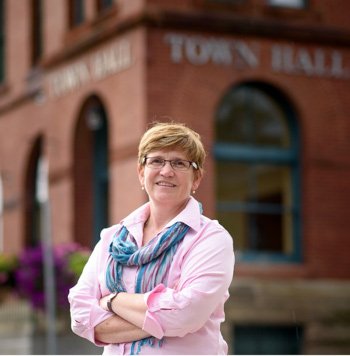 “We see that as an important piece and we’re going to continue to work on it,” McCarron says. “There’s a provincially-owned park, Pomquet Beach in our Acadian village, where we’ve installed a set of Mobi-Mats to allow people with mobility issues to get to the water’s edge. Although it’s a provincially owned facility, that was something that the Municipality funded. Then, PurlBrook DKI, one of our local businesses, saw the need for a better landing area, so they donated a concrete pad to better access the boardwalk from the parking lot. We also have a facility called Keppoch Mountain that operated as a ski hill at one point. The former ski hill is now a four-season park with accessible trails, and some of the nicest mountain biking in Eastern Canada run by a group of amazing community volunteers.”

The County also sees value in having some recreational infrastructure concentrated within the Town. “We have a skateboard park that cost just over $600,000 that we partnered on with StFX,” details Boucher. “We also partner with the County on many things: we have our dog park; we have a Challenger Baseball field which, again, is adapted for children with disabilities; but probably our biggest collective accomplishment over the last year has been our respective commitments to active transportation.”

The Town has committed $1 million to expand its bikeway infrastructure with 2.6 kilometers of safe, comfortable, AAA-standard (that’s “All Ages and Abilities”) dedicated bicycle lanes. The Town is seeking a provincial investment to complete the $4 million project. Likewise, the County has committed $2.1 million in funding towards an 11km AT corridor that will connect to the Towns network. “It really shows a regional cooperation and collaboration to be able to put this together,” admits Boucher. “Also, in Nova Scotia, we have a province-wide cycling network called the Blue Route. This infrastructure project puts us on the Blue Route map, giving people one more reason to come and visit Antigonish.”

Alongside parks and recreation, broadband internet is another requirement observed by the Town and County for a sound quality of life and for economic vitality. As the COVID-19 situation continues to evolve, Antigonish is working towards increasing its community’s access to reliable broadband infrastructure, both for the purposes of remote work as well as for the more efficient coordination of learning resources. According to Shirlyn Donovan, Strategic Initiatives Coordinator for the County, “The Nova Scotia government put $193 million into a broadband trust to be administered by Develop Nova Scotia. There is a three phase approach to cover as close to 100% of the province as they can. Close to 1500 addresses in Antigonish have just been hooked up to fibre.”

A commitment to sustainability is another trait that both the Town and County have in common. The Town, which owns its Electric Utility, is part owner of a 10-turbine Wind Farm which has allowed the community to achieve a +80 percent clean energy profile. The Town is exploring other new initiatives with community partners that explore increasing electrification opportunities. In addition, the County is working with their stakeholder groups to explore options for solar, as well as increasing energy efficiency to 17 community buildings such as fire halls and community centres.

“I think Owen will agree that in our community, both Town and County, one of the biggest assets we have are the people,” adds Boucher. “We have the highest volunteer rate on the eastern side, but we also have people that just care about other people.”

“At the end of the day, it’s not about us as politicians, it’s about the community and the residents that we serve,” concludes McCarron. “We’re mindful of that every time we make a decision, and that’s why collaboration is such an integral part of what Antigonish offers.”

What: A community-oriented Town and County

Where: Northeastern Nova Scotia on the Northumberland Strait