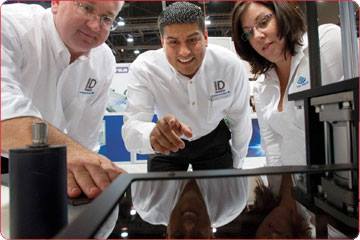 PMMI, The Association for Packaging and Processing Technologies (formerly Packaging Machinery Manufacturers Institute) is a trade association made up of more than 800 member companies that manufacture packaging, processing and packaging-related converting machinery, commercially available packaging machinery components, containers, and materials in the United States, Canada, and Mexico.

PMMI was created in 1933 as a response to the National Industrial Recovery Act, promulgated during the Great Depression, which set strict regulations on American industry. Thirty-five packaging machinery businessmen met in Buffalo, New York to decide whether to form an association that would act as the advocate for the packaging machinery industry to the Department of Labor. In 1935, after the National Recovery Act was declared unconstitutional by the U.S. Supreme Court, PMMI veered from its mission as a defender of packaging practices against the regulations of the NRA, to a role of homogenizing the packaging processes and educating end users about all of the different packaging machine designs that were currently in operation. By 1938, all PMMI members had catalogs of their equipment on file at the Institute’s New York office, which became a clearing house for inquiries.

“All of our members are companies that provide processing or packaging solutions to the world’s consumer packaged goods firms – those companies that manufacture equipment to fill, close, label, case-pack, and palletize products,” says Tom Egan, Vice President for Industry Service. “The majority of the members are equipment solutions suppliers with some of them being material suppliers, and others being what we call components suppliers that make components that go on to these machines. Most every product in a store in some way, shape, or form has been packaged, and in many cases, if its other than completely manual, it involves equipment and material solutions from the PMMI members.”

Egan adds that more than 40 percent of PMMI’s members are relatively small businesses, with annual sales under $20 million. “We have some very big companies – in the $100 million range, and, in a few cases, over a billion dollars in total global sales,” he reports.

In 2014, PMMI acquired the Summit Media Group, which is now called the PMMI Media Group. This unit of the Association publishes print and digital publications that function as a knowledge exchange for the entire supply chain from manufacturer to end user. They include: Packaging World, Automation World, Healthcare Packaging, Contract Packaging, Packaging + Processing OEM, and ProFood World.

A third PMMI unit, Egan calls its “Business Drivers.” “It comprises the elements that are involved more directly with the business operations of our members, including education, research that we do, industry services, the interface between members and the CPG firms, and our global marketing efforts,” he explains. “We offer a range of training programs. The majority of them are for our members, with some of them available to the industry at large. We have specific education initiatives for some technical items, such as risk assessment. Another is training for individuals who train operators of our equipment.”

PMMI also offers educational opportunities to students in two-year and four-year college programs, by awarding scholarships to attend PACK EXPO and learn about the industry. In addition, PMMI U, the education section of the Association, has partnered with 51 institutions in the United States and Canada that offer packaging and processing curriculum. PMMI U has also partnered with the Mid Atlantic Mechantronic Advisory Council and several packaging and technical schools to develop a series of Certificate Programs focused on Mechatronics.

Recently, in a follow-up communication, Business View Magazine asked Izquierdo some specific questions about the actual technologies employed in the packaging industry. Here are those questions and his responses:

BVM: What would you say are some of the most significant changes in technology to have impacted the packaging and processing industry in the past 5 years?

Izquierdo: “The most significant change in the packaging and processing industry from a technology standpoint is the move from an emphasis on machine speed to flexibility and fast changeover. For decades it seemed every evolution in equipment was aimed at more products getting out in a shorter amount of time. Now, as consumer preferences have changed, machines need to be able to quickly change over to accommodate different products on the same production line. In the past, it was necessary to be quick at packaging a lot of one product; now, due to the explosion of SKUs, it needs to be quick at changing over to package a variety of different products in the production line.”

BVM: Are there any new ground breaking technologies that have come out that are impacting line expansion or plant automation in the industry?

Izquierdo: “One notable technology that is impacting the industry is the combining of robotics and vision systems. Initially robotics were brought inline to increase speed of production. Now, with vision attached to automated systems, the machines can identify a number of different products on the conveyor belt effectively. For example, initially robotics could rapidly package cookies in a container. Now with vision attached, the robot can be programmed to see and package an assortment of cookies in one container.”

BVM: How do you predict technology will continue to impact your industry?

Izquierdo: “Ultimately packaging and processing are now consumer driven industries, whereas they once followed the direction of consumer packaged goods (CPG) companies. Today’s consumers are fickle and their buying habits change from month to month, or year to year. Because of this, automation will always be key to ensuring machinery evolves and keeps up with what customers want.”