A pontoon is a floatation device with enough buoyancy to float itself plus a heavy weight, such as a bridge, a diving platform, or a boat. The modern pontoon boat was said to have been invented in 1952, by one Ambrose Weeres, a Minnesota farmer, who put a wooden platform on two columns of steel barrels welded together end-to-end. His boat, christened “The Empress,” was more stable and a lot roomier than a conventional V-hull type boat, and Weeres began marketing the concept, ultimately earning the nickname, “Mr. Pontoon,” and kick-starting a new American industry.

Misty Harbor Boats of Fort Dodge, Iowa has been manufacturing pontoon boats since 1989. Current Vice President, Tom Christy, who joined the firm in 2012, recounts its history: “The company that actually started the production of the pontoon boats was involved in the manufacture of boat and travel trailers,” he begins. “Sometime soon, thereafter, Dave and Lisa Wilson purchased the company and began manufacturing in Humboldt, Iowa. Then, in 1993, they moved the operations to Fort Dodge. Dave and Lisa continued under the Misty Harbor brand until January of this year, at which time my partners, John Jergens and George Thomas, and I developed the Marine Group LLC and purchased the business from them.”

According to Christy, the pontoon segment of the boat industry had grown tremendously throughout the 1990s and into the early 2000s, until the Great Recession came, hammering the entire sector. “Being in a business primarily motivated and influenced by the availability of discretionary funds, there was a pretty big swoon in the demand of boats in 2008,” he says. “But then, the pontoon segment of the boating industry has rebounded greatly in comparison to other boat segments.

“By 2012, I’d say we were primarily regional at that time. A lot of our focus has been in Minnesota and Wisconsin. Those are large pontoon boating states, so it made sense, given our locale. We did distribute to other states beyond that, but our business, overall, has been in those areas. This calendar year, we’ll produce nearly twice what we did five years ago and we also sell in Arizona, Washington, Maine, Florida, Texas, and some distribution into Canada; we even ship internationally to Australia and China. So, our overall business continues to expand and we expect that to continue over the next three years. We’ve got a projection growth of an additional 75 percent. So, it’s been exciting times.”

Today, Misty Harbor Boats operates out of two Fort Dodge locations. “We added a facility in 2016, here in Fort Dodge, where we perform some secondary manufacturing operations,” says Christy. “Our overall square footage is around 150,000 square feet between the two facilities. We employ 145 people.”

Christy believes that the company separates itself from the competition in several ways. “Our biggest differentiation that we try to push is value without compromising quality, without compromising the finish and overall appearance of the product,” he states. “For 2018, we have completely revamped our lineup with a focus on continuing to invest in high quality, interior finishes, as well as updating the helm for the captain. Those have been our most dramatic changes for this model year.”

“We also differentiate through providing a broad spectrum of product. We produce as small as a 14-foot by 7-foot-wide vessel, up to a 26-foot by 8 ½ -foot-wide. So there’s product for everyone. Some manufacturers focus on larger product, or certain types of product. We try to provide a large spectrum of availability for different types of boaters.”

What all pontoon boaters tend to appreciate are their boats’ inherent design features. “You can get up and move around pretty freely,” says Christy, “even with eight people.  If you try to do that with some of the other styles of boating vessels that are out there, you can’t; there aren’t good, easy walkways to be able to move about.” Pontoon boats are also more stable. “When you’re dealing with an 8 ½ – foot-wide deck with floatation devices instead of a V-hull, where that V-hull is naturally intended to bank, there’s a straight stability, edge to edge, with the pontoon that doesn’t exist with most other vessels of that size.”

And while a common perception of pontoon boating might formerly have been one of slow, lazy days on calm lake water, Christy states emphatically that “pontoon boats of today, are not your grandfather’s pontoon. The average horse power that would go on a pontoon was, maybe, 40 to 60 horsepower. It’s not uncommon to put 250-300 horsepower engines on pontoons today.  We have product for 2018 that we tested – it’s a 50 mile an hour boat. So, we’ve closed the gap in performance, and what’s perceived as performance, for a pontoon. As far as where they’re used: lakes, rivers, intercoastal water – all of it. We’ve seen tremendous growth in the last handful of years in the use of saltwater applications in the industry, so we offer saltwater packages for use in salt and brackish water areas. So, what was perceived in the past of what a pontoon couldn’t do – those barriers are being shattered.”

Roominess, stability, and now, greater speeds, all add up to a boat that can go anywhere and do many things. “The difference with a pontoon is that versatility,” Christy declares. “It can be on a small lake or pond, where you’re puttering around and maybe doing some fishing and relaxing, or it can be a 55 or 65 mile-an-hour boat that’s pulling people doing various water sports. And that’s why people are taking their old fishing and fiberglass boats and trading them in for one pontoon that can do all of it.”

Going forward, Christy believes that the current trend of continuous performance improvements will result in the manufacture of bigger, faster boats. “For us, that means bigger hull construction, whether that be for twin engines, or for different performance packages – to be able to meet the consumers’ desires for that bigger, faster performing product.”

At Misty Harbor Boats, responding to the consumer’s desire is the company’s prime directive, as well as its greatest takeaway. “We are a customer-focused company, looking to provide a great value product to improve people’s lives,” says Christy. “What we talk about regularly is that we’re doing something for people to enjoy, and not a lot of people get to do that. To be able to provide that is something that we cherish and take a great responsibility for. It’s something that we pride ourselves on.”

WHO: Misty Harbor Boats
WHAT: A manufacturer of pontoon boats
WHERE: Fort Dodge, Iowa
WEBSITE: www.mistyharborboats.com 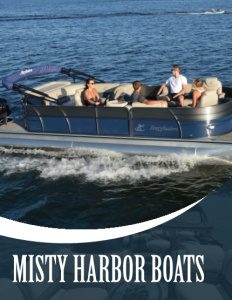