For an astounding 17 decades, safety and industrial supplies provider, Mackenzie Milne, has been riding high on the winds of change. Now celebrating 170 years of business excellence in the Sarnia, Ontario region, the legacy began in 1848 with Charles and John Mackenzie, brothers of the then second Prime Minister of Canada, Alexander Mackenzie. The entrepreneurs started as a tinsmith shop, then took on ship’s chandlery, and added tools and hardware as the town became a city. When the oil industry was born, the firm specialized in petrochemical supplies and continued to push into safety supplies as the industrial era ramped up. 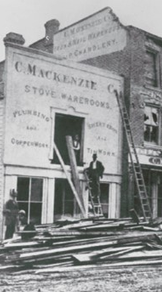 Today, Mackenzie Milne has parlayed its rich history of impeccable customer service and niche marketing into a thriving entity with sales in 2017 of almost $9 million. Business View Magazine learned the company’s secrets to longevity and continued success, right from the source – Mackenzie Milne Manager, Greg Primmer, and Sales Manager, Albert Hoekstra. The following is an edited version of our conversation:

BVM: Congratulations on your 170th Anniversary! Can you give us some highlights of Mackenzie Milne’s history?

Primmer: “The founders, Charles and John Mackenzie, were real go-getters in business and politics. They contributed a lot to the Sarnia region as far as hospitals, the railway, the tunnel system under the river to connect the U.S. and Canada, and they are attributed to be the first ones to export Canadian oil to England. There were no roadways, no railways, at the time, everything was done through the Great Lakes system. So, they catered to the shipping industry with ship chandlery, stoves, and tin smith services. Over the years, the company continued to evolve with a focus on being first to market with cutting-edge technology of the times. They introduced the first electric lighting to their region selling fifty 1200 candle-power arc street lamps to the city of Sarnia in 1893.

“Fast forward to 1979: the store suffered a devastating fire and didn’t recover until 1983 when my father, Allan Primmer, and three other partners, bought the company and moved it. Allan eventually bought out the partners and in 1995, I became a partner and store manager. We grew the annual sales from $300,000 in 1984 to $1.25 million in 1998, largely because of adding ‘safety supplies’ to our current offering of hand tools and material handling equipment. Having doubled our inventory, a larger store was needed, and in 1999 we moved to a brand new, larger facility just down the road. We broke the $2 million threshold in sales in 2002, and by 2005 we were doing $5 million.”

BVM: Can you describe the corporate culture at Mackenzie Milne?

Primmer: “Mackenzie Milne is a family business, with a real focus on creating a friendly atmosphere for customers and employees, alike. Half the staff are family members. The majority of our 10 employees have 15 years or more invested in the firm. Our sales manager, Albert Hoekstra, has been here for 26 years. Having a team with 150-plus years of collective experience is another one of our recipes for success.

“We have a lot of repeat business, thanks to our very personal customer service system. No voice automation – there’s always a person answering the phone and greeting you at the store. People like that we address them by their first name. A lot of them have been with us for years. They may change their hats and the company they deal with, but they always keep coming here.”

Hoekstra: “As we’ve grown as a company, we’re opening up to a lot of different markets. The industry is really becoming automated in the supply business and the end user is no longer dealing with people. So, we’re focusing our attitude on relationships with customers, to gain ground.”

BVM: How do you differentiate yourselves from the

Primmer: “We pride ourselves on flexibility and independence. We do whatever it takes to make the customer happy. We cover a wide breadth of product categories in many industries, but we’ve really excelled the last few years with niche lines such as asbestos removal and abatement supplies, truck and jobsite boxes and totes, tailored work wear, etc. With more sales occurring out of town, we can negotiate better freight and shipping rates, which in turn drives more business across the country and into the United States. We’ve watched competitors leave the market altogether in certain categories because of how successful it’s going for us.

“Ninety percent of our sales are in the Sarnia region; however, we also have agreements and national contracts with customers across North America. And we’re in the process of implementing an Amazon-style, internet-based shopping experience to widen our national and global reach.

“The entire Mackenzie Milne store is one big 12,000-sq.-ft showroom. All inventory is displayed, so customers can see and interact with everything we sell. While the store is open to the public, most of our clientele are tradesmen, teamsters, and contractors who buy on account and come in several times a day. None of the inventory is priced, and merchandising efforts are minimal to keep overhead costs down. The strength of our buying power and commitment to stock is on display. Why keep pallets of duct tape or rain suits in a dark warehouse when you can plunk a skid beside the sales counter and watch customers gape at the towering cases? More often than not, you’ll hear them say, ‘I didn’t know you guys carried this,’ or ‘I should get some of these while I’m here.’”

Hoekstra: “In 2006, we joined the Indica Marketing Group, the largest buying consortium of industrial supplies in Canada. They have a unique platform that links together manufacturers and distributors as partners. For an independent company like us, it means we can suddenly buy like the large guys. Also, the manufacturers have their people out in the field talking to customers and end users on our behalf, which is a huge help.

“We also like to thank those who have supported us, so, once or twice a year, Mackenzie Milne holds an open house/customer appreciation luncheon and invites suppliers to take part and set up booths, turning it into a grand tradeshow unrivalled by competitors. We serve a fully-catered meal that is second to none. This year’s event will be extra special to celebrate our 170th anniversary.”

BVM: What role will technology have in the future of Mackenzie Milne?

Primmer: “Technology plays a huge part in what we sell, how we sell, and how we continue to succeed. As an industrial supply retailer, we must have inventory and knowledge of the most cutting-edge advancements and products for our customers. We try to be the first to market with things like Bluetooth-capable, personal gas monitors, fall protection gear that meets the latest legislation, newest power tool models, etc. And we must be early adopters of those same kinds of technology.

“We were, quite literally, the first firm to make use of electric lighting and motorized delivery vehicles in the early 1900s, and more recently the first industrial supplier to install digital TV advertising screens at the sales counter, and the first to have digital signature capture devices which helped us become practically paperless. This year we hope to have scanners and barcode readers in place to improve accuracy and speed up transactions.

Mackenzie Milne’s future is a mirror of its past; a story of evolution. The company that began 170 years ago as a tinsmith shop will continue to foray into new markets where opportunities arise. Every year Mackenzie Milne will find new niches to fill.

Check out this handpicked feature on DressUp – Always something new.

WHAT: Provider of Safety and Industrial Supplies 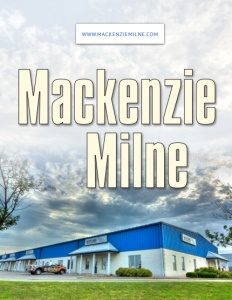