Ebner Furnaces, Inc. – The heat is on!

The heat is on!

Business View Magazine interviews Herbert Gabriel, General Manager and VP of Sales for Ebner Furnaces, for our focus on Manufacturing in the Aluminum Industry.

Globally recognized as a market leader, Ebner Furnaces, Inc. understands that the choice between conventional products vs. industry-leading technology, or any old solution vs. cutting-edge innovation are daily challenges. The company works to resolve these differences through ongoing research and development that results in fabrication, installation, and commissioning of the best heat treatment facilities for the metal semi-finished products industry, worldwide. Backed by seven decades of passion, dedication, and expertise in heat treatment technologies, Ebner Furnaces gives customers that sought-after edge over the competition. When it comes to innovative solutions, the heat is on!

The original company, Ebner Industrieofenbau, was founded in Linz, Austria in 1948, by Josef Ebner to produce industrial furnace equipment for European companies recovering from the aftermath of World War II. In 1975, Josef’s son, Peter, succeeded his father as Managing Director and industrialized the hydrogen annealing process that quickly grew the company. Today, Ebner’s furnaces utilize a process called bright annealing, which incorporates a hydrogen atmosphere to heat-treat metal; making it softer, more flexible, and shinier. The company operates one U.S. facility in Wadsworth, Ohio (100 employees), with corporate headquarters in Austria (750 employees), and a second large facility near Shanghai, China (250 employees).

Herbert Gabriel, General Manager and VP of Sales for the U.S. division of Ebner Furnaces reports on some notable recent achievements for the company: “We’ve done a couple very large projects for our customers in the last year. We’ve been a big part of the new rolling mill facility that Nucor is putting into operation in Hickman, Arkansas, not far from their existing plant. We supplied, installed, and commissioned 24 annealing bases there. It was a huge construction site – they’re now getting the rolling mill up and running and some product is already produced through our equipment. But they’re still in the ramp-up phase.”

Ebner Furnaces received the order from Nucor (already a valuable customer) in April 2017 and finished its part of the project this past January. Designing, building, installing, and commissioning 24 annealing bases in that time frame is exceptional and much appreciated by the client. Ebner is also doing a large project at Arconic in Davenport for aluminum plate, used in aircraft wing sections, among other critical products. Two furnaces are being implemented there: the first to heat-treat the plate and the second for a metallurgical aging process.

North of the border, Ebner is also undertaking projects at steel companies in Ontario, Canada, including a large one – 12 furnaces – at Stelco in Hamilton. Commissioning of that will be done in August. By that time, the company will also be starting installation of four annealing furnaces at Dofasco in Hamilton, and in the fall of 2019, it’ll be doing a project in Milton, Ontario at Karmax Heavy Stamping, a division of Magna International. This will be the second Ebner furnace for Karmax; the last one was installed about two years ago. 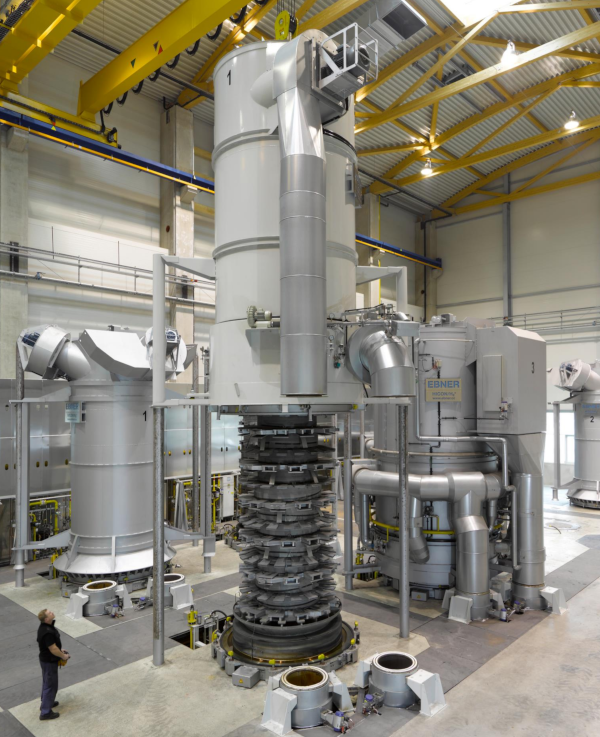 Ebner is involved in a lot of diverse industries. According to Gabriel, “It’s difficult for the average person to go a day without touching something that’s been processed through one of our furnaces. From the seatbelt buckle in your car and the aluminum foil chocolate bar wrapper, all the way to aircraft wings, and aluminum alloy plates that go into space. I recently came across an article about the Orion space crew capsule – the capsule was produced by one of our customers who only have Ebner furnaces. We’ve been using that article for promotion to our employees, so they can connect the work they do to some of these exciting projects, as well as everyday products. In that regard, we set up display cases throughout the company and put – not a whole space capsule – but everything from cutlery to soda cans to masonry trowels inside the cases to build this relationship with the product for our employees.”

Ebner Furnaces has rolled out what it calls a “Together Platform” that is, essentially, internal social media accessible only by employees through a web browser. In fact, the start page on the company computers is the “Together” page that features the latest Ebner Furnace and industry news, the type of posts you would see on a Facebook social media page. A lot of information exchange is done in that manner, but it’s locked down to just employees because much of the information could also be used by competitors. Ebner has also installed LCD live-screen televisions in various areas of the facility; showing the Together information and company announcements to keep all employees informed. The office staff can see the news automatically when they log on to the web browser, and manufacturing employees, who don’t have a computer at hand, can get the information from these TVs. Treating employees well is a huge contributor to the firm’s long-time success. In fact, there are a handful of people that have worked at Ebner since the company opened in 1987.

Currently in the works is a lean manufacturing project, looking at several areas in the workshop to optimize the manufacturing process and improve lead times, and reduce the cost that goes into the product to stay competitive in the marketplace. Gabriel explains, “There is a big push now in all three locations to rekindle the lean manufacturing project. Because, of course, you always do some of it but now there’s a push to do more of it and really eke out inefficiencies in the manufacturing process. We hired a consultant from MAGNET, the Manufacturing Advocacy and Growth Network, who is walking us through the process and makes all kinds of tools available to us. We have weekly meetings with them to keep us on track and, hopefully, we’ll soon complete the first lean project here. And then, we move on to the next one. They are a local non-profit firm, based in Cleveland, working with the state and other stakeholders to make businesses in northeast Ohio more competitive.”

A year ago, Ebner was considering expansion of the Ohio factory but, actually, took a different route. Rather than adding on to the building, they decided to first do the lean manufacturing project; selecting the path to optimize and maybe avoiding an expensive expansion, entirely. However, they did choose to install a large, 24 ft. by 30 ft. paint booth at the Wadsworth facility, which is still an ongoing project and should be complete in late summer 2019.

Technology-wise, Gabriel notes, “In 2018, we switched to SAP as our ERP system. That was a big project to adopt but we’re through it and have been running successfully. We’re still in the optimization phase, so, right now, I haven’t seen any savings yet, but it’s more transparent in terms of data you can get, certain KPIs (key performance indicators) you can now more easily extract from the system, so I believe that, in itself, is providing advantages. And as we get more proficient with the system, we hope we also get more efficiency improvements, rather than just indirect ones that we’re seeing at the moment.

“Five years down the road, our significant objectives are that we grow as a company, possibly by acquisitions to increase our portfolio. It’s difficult to say what the political climate is going to bring us, in terms of business – depending on what news channel you listen to, either we’ll have the biggest recession in six months, or the growth will continue into infinity. But we’re looking ahead positively at Ebner Furnaces, where the heat of success is definitely on.”

WHAT: A fabricator of heat treatment facilities for the metal-based industries.