In 2005, when Hurricane Katrina slammed up against the Gulf Coast of the Southern United States, it did a great deal of damage all the way from Central Florida to Texas. One of the places the storm hit hardest was the Mississippi Gulf Coast, where the Mississippi Coast Coliseum & Convention Center sits midway between Biloxi and Gulfport.

While many places suffered from Katrina’s wrath, the Mississippi Coast Coliseum & Convention Center was particularly ravaged, according to Matt McDonnell, its Executive Director, who has spent the last three decades in service to the facility. “Everybody read about Hurricane Katrina hitting New Orleans,” he begins. “New Orleans certainly took a lot of damage; it was a catastrophic event for their community and for many of their facilities. But theirs was basically a breach of levees that caused flood water to enter the city, stay for a number of days, and then exit.

“For us, we had a tidal wave that hit our community and our 26-mile coastline. Our facility is directly across U.S. Highway 90 from the Gulf of Mexico,” he continues. “We took 27 feet of water in terms of storm surge, which resulted in seven feet of water coming throughout our entire facility. All of our infrastructure was, basically, wiped out. Saltwater and electronics don’t mix; saltwater and anything, really, doesn’t mix well. So, we had to completely gut, rebuild, remodel, tear out, and start from scratch – equipment, utilities, infrastructure. We operated the facility on a crew of ten people for about a year and a half in order to survive to where we could get back on our feet.”

Hardly was the renovation complete, however, when the Deepwater Horizon oil spill – the world’s largest accidental spill at over 5 million barrels – covered the same gulf coastline for 87 days, putting a further two-year damper on Gulf Coast business. “Not only did we take the hit from Katrina, but we also took the hit from the BP disaster. Maybe not to the same extent that other communities did, but we did feel the economic downturn in 2010 and ’11,” McDonnell says. The good news is that, today, the largest beachfront facility of its kind in the South is doing well. “The last two years of our operation has been very good in terms of revenues and numbers of events that we’ve been able to generate for the facility,” he reports.

The Mississippi Coast Coliseum & Convention Center was created by legislation in 1968, and originally funded by a two percent food, beverage, and lodging tax imposed in Harrison County, Mississippi, where Biloxi and Gulfport are located. According to McDonnell, the Center is neither a privately-owned nor municipally-owned facility. “We’re very unique in the sense that we’re a political subdivision of the State of Mississippi, he explains. “We are like a city within the city of Biloxi – kind of like the Vatican is to Rome,” he quips.

The Center operates under a seven-member Commission which is appointed by members of the Harrison County Commission, the mayors of the cities within the county, and the Governor of Mississippi. Its operating expenses are required to be generated by its revenues, while its debt service for capital expenditures is being paid for with a two percent hotel lodging tax.

Today, the Mississippi Coast Coliseum & Convention Center has about 30 full-time employees and as many as 600 part-timers “in any given year, depending on the peaks and valleys of our booking cycle,” says McDonnell. In addition to the many outdoor fairs, festivals, and events the facility hosts, the Coliseum plays host to Broadway shows, world-class musical acts, professional comedians, sporting events, rodeos, truck races, and the like. Its particular niche is family shows such as Disney on Ice (it’s the only facility in the region with an ice floor), the Harlem Globetrotters, and the Ringling Brothers, Barnum & Bailey Circus. The Coliseum also holds one of the largest crawfish festivals in America, over two weekends every April.

Meanwhile, the Mississippi Coast Coliseum & Convention Center hosts trade shows, major indoor events, conferences, graduations, etc. “It’s not uncommon for us to have five or six different events going on at the same time on site, either on the grounds, in the arena, or multiple events going on in our convention center,” says McDonnell.

This time of year is particularly busy, as the Center is in “graduation mode” according to McDonnell. “We’ve got the largest community college system in the country located here in the State of Mississippi and they’re holding their annual commencement that will attract over 9,000 guests and over a thousand graduates. We’ll have a college graduation taking place and then about a dozen high school graduations that will be spread out over two weeks,” he reports.

Now that the natural and man-made disasters are, it is hoped, far behind it, McDonnell believes that the next step for the Center is in the area of hotel development right on its newly-acquired beach property. “There’s so much business out there; it’s a multi-billion dollar industry and we can cater to so much of it because of the flexibility of our facility,” he says. “And we’re seeing more and more conventions that want to come here, but until we achieve a headquarter hotel, it makes it difficult for them to locate here. We’re in the process of putting an RFP out, as we speak,” he continues. “Once that starts, we feel that other properties will come aboard, as well, where we will have multiple hotel brands and price points adjacent to or in close proximity to the facility. And when that occurs, we should see tremendous growth in our convention business.”

Hotel rooms are important to the Center in two ways: their occupancy taxes pay for its capital expenses, and they are necessary amenities for organizations that want to book exhibit halls and meeting rooms for their activities over several days. “Our hotel numbers were depleted drastically after Hurricane Katrina and they have slowly started to build up to where now we’re getting back towards the 11,000 number [of rooms] within our county,” says McDonnell. “We anticipate that that number will be back up to pre-Katrina levels within another year. It was about a ten-year process to fully recover from Katrina, and the area itself, while it has rebounded very nicely, still has a lot of work to do to fully recover from that natural disaster.”

Regardless of the past difficulties and ever optimistic, McDonnell foresees yet another expansion of the Center’s sphere of influence some five years up the road. “I can see multiple hotel brands in or adjacent to our facility,” he envisions. “I can see a large entertainment district with retail and more restaurants located within a stone’s throw of the building.” While McDonnell admits that there are already hotels, retail, and restaurants within several miles of the Center, he strongly feels that “in order to fully achieve what we’re capable of, those amenities need to be directly on our property or next to it.”

Meanwhile, some updates recently have been made to the Center in order to keep it attractive to potential bookers, with more renovations on the drawing board. “We’ve gone to fiber optics within the facility,” says McDonnell, “based on the demand for the amount of data that’s being transmitted for various consumer shows and conventions that are currently utilizing our facility. So, now the building is fully wired with fiber optics, and we see other technological advances that we’re going to have to make to stay competitive. From the arena standpoint, our arena is an aging facility – it was opened in ’77 – and while we’ve done some renovations to the facility – seating, lighting, dressing rooms, lobby, restrooms – the amount of technology that we can bring to the arena is limited to a certain extent,” he adds, ruefully.

Matt McDonnell’s original contact with the Coast Coliseum & Convention Center was as a college student, back in 1977, when he worked on the facility’s construction crew. He was appointed as Executive Director in 2015, after serving as Assistant Executive Director since 1986. But even after coming through some very difficult days, he has no thoughts of immediate retirement. “I’ve got to figure that I should at least put in another ten years plus, here at the facility,” he declares. “And in those ten years’ time, we’re certainly going to enjoy the fruits of our labor.”

Still the crowd favorite, it’s little doubt, that with the acquiescence of Mother Nature and with the good works of man in the offing, for the Mississippi Coast Coliseum & Convention Center, those fruits are apt to be sweet, indeed.

Check out this handpicked feature on The Greater Columbus Convention Center.

WHAT: A multi-purpose entertainment arena and a venue for conventions and trade shows 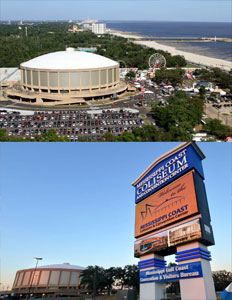