At the center of excitement, culture, and history

When Muhammad Ali died, recently, one of the photographs of him that was reprinted in newspapers around the globe was that of the newly-crowned heavyweight champion of the world standing over his vanquished foe, Sonny Liston, whose prone body lay defeated on the canvas floor of the boxing ring. That iconic picture was taken in 1964 at the Miami Beach Convention Center (MBCC) and according to Matt Hollander, the Center’s current General Manager, it’s a proud part of the history of the facility, originally built in 1957, as a way to attract some major events to an area, which was, at the time, considered to be merely a quiet beach destination for vacationers.

As Miami and Miami Beach both continued to grow in size and stature, the Center grew along with them. In 1968, the Miami Beach Convention Center hosted the Republican National Convention and its more than 20,000 delegates and in 1972 it hosted more than 45,000 delegates at both the Republican and Democratic National Conventions. “And since 2002, we’ve been home to Art Basel Miami,” says Hollander, “a major international art fair, which has helped define the art world here in the Americas. And for the period of time that it’s here, each December, it establishes Miami Beach’s place on the world stage in the art and culture community.” Indeed, the 2015 show in Miami presented 267 leading international galleries from 32 countries. Over five days, the show attracted 77,000 visitors, including private collectors and directors, curators, trustees, and patrons of nearly 200 museum and institution groups. The show hosted first-time collectors from Cambodia, Ethiopia, Nicaragua, Romania, Togo, and Zimbabwe.

In 1989, the facility underwent a $92 million renovation and expansion doubling in size and creating the four hall center that it is, today. But all of that is about to change as the MBCC has just begun a massive, $515 million renovation and expansion project, slated to be completed sometime in mid-2018. According to Hollander, it will be “a full-gut renovation of the existing facility’s current footprint. About a third of one side of our building is going to be completely demolished and replaced with a new structure. All of our meeting rooms and ballroom spaces are being completely renovated with new technology, new finishes, and new conveniences for both our users and our operators. All of the major facility systems’ infrastructure – our HVAC, electrical systems, data technology, lighting – are all being replaced with a focus on high efficiency. The building, at minimum, will achieve LEED Silver status, with the ultimate goal of trying to reach Gold. What’s new to the building, in terms of new space, is the addition of a 60,000 square foot, grand ballroom.”

Since Miami is right on the front lines when it comes to issues of sea-level rise due to climate change, the design of the renovated Miami Beach Convention Center will also incorporate additional pumps and systems to ensure that the building and its occupants would be safe from any rising-water events. “We’ve also taken efforts to ensure that major systems are located at an elevation, future-proofing them against the potential of sea-level rise,” Hollander adds.

In addition, Hollander reports that there will be changes beyond the walls of the new structure, itself. “It’s a holistic approach to this area,” he says. “Part of the renovation project – across the street from the building in what was previously a surface parking lot – is going to be a community park that will also serve as an extension of the Convention Center where we can do programming. There will be a food and beverage pavilion, as well as a veterans’ memorial, honoring the veterans from Miami Beach.”

The Miami Beach Convention Center is owned by the City of Miami Beach and the funding for its operations, as well as its capital investments, comes through tax dollars raised via visitor-related taxes from both the city and county governments. Spectra Venue Management, under contract with the City, has operated the Convention Center since 2008.

Hollander reports that while the renovation is ongoing, the facility will be operating in just half of its space with an abridged staff of 45 full-time employees. “Our event load is reduced,” he states. “We would normally host, between large and small events, in excess of 150. This year, that number was reduced to about 50. And next year, because we’re actually going to shut down for a period of about four months, while some of the major demolition of an existing portion of the building takes place, we’re only going to be hosting 17 events during the course of the year.”
Hollander says that one of the objectives of the renovation is to ultimately broaden the facility’s customer base. “We historically have had a very strong mix of trade shows and consumer shows in this building that have been attractive to a local and wider regional audience,” he says. “One of the goals of the renovation is to better establish our position with regard to conventions and meetings on a national and international basis, generating a lot more out-of-town visitors and generating more overnight room stays in the hotels in the region. The changes to the Center are really driven to help make the building a better tool for those meeting planners that plan national and international conventions.”

Another of the Center’s goals is to grow the number of what Hollander calls “first priority events.” He explains: “We define a first priority event as one that will utilize, at minimum, 4,000 rooms throughout the course of the event, and 1,500 room-nights on its peak night. So, our goal is to grow that number from what we’ve been averaging – three to four in a successful year – to up to 14 new city-wide conventions on an annual basis. Because what that equates to is a lot more overnight guests in our hotels and significant impact of their spending. And because of the international nature of our destination, with a particular focus on those events that attract an international audience, international visitors tend to stay longer and spend more, so it has an even greater impact on our community. It’s less about an actual number through the building and more about growing the impact that we have on the businesses in the Miami and Miami Beach area.”

Hollander admits that there is a risk of losing some of its clients by shutting down, temporarily. “But the demand and the need for modernized facilities here in Miami Beach has long been known,” he says. “The efforts to try and get an expansion and renovation of this facility go back close to twenty years. And finally, it’s become a reality. Many of our long-time users of the venue have been long-awaiting these changes. Without question, it does cause some pain for some of them and certainly during that period when we’re shutting down, some customers will be impacted, but we’re optimistic and confident that they will return once the renovation is complete. We’re very excited and I think they are, as well, that the new facilities will help carry their events and activities well into the future. So, in terms of the business environment, we’re very optimistic, based on the early interest in what’s coming with this new facility; that we will achieve our goals of establishing ourselves as a significant destination for major international meetings – especially those that are looking to draw an audience from the Caribbean and the Americas. As we look ahead, I think that’s what we will be.”

Check out this handpicked feature on Millville, New Jersey – Opportunities to grow.

WHO: The Miami Beach Convention Center

WHAT: Opening in 1958, the MBCC is composed of four exhibition halls, two ballrooms and a concert venue. 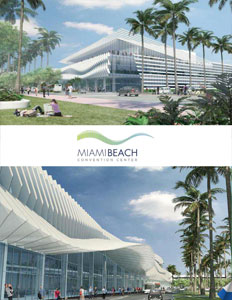