Business View Magazine interviews representatives from Goldsboro, North Carolina, as part of our focus on economic and cultural development in American cities.

Goldsboro, North Carolina, a city of approximately 35,000, is situated in the state’s Coastal Plain, bordered on the south by the Neuse River and the west by the Little River. It sits about 43 miles southwest of Greenville, 55 miles southeast of Raleigh, the state capital, and 87 miles northwest of Wilmington. Originally called Goldsborough’s Junction, the city was named after Matthew T. Goldsborough, an Assistant Chief Engineer with the Wilmington-Weldon Railroad, which he helped bring to the area in the early 1840s.

The town, whose name was subsequently shortened to Goldsboro, was incorporated in 1847 and became the new seat of Wayne County. It was a trading center for the surrounding cotton plantations and, because of its importance as a railroad junction, played a significant role in the American Civil War, both for stationing Confederate troops and for transporting their supplies. In 1942, the Seymour Johnson Air Force Base opened on the outskirts of town, and today, it is the home of the 4th Fighter Wing, and, along with local hog and turkey farms, and the Mt. Olive Pickle Company, is a significant driver of the local economy.

For the past two decades, Julie Metz has been Goldsboro’s Downtown Development Director, as well as the Executive Director to the Downtown Goldsboro Development Corporation (DGDC), a non-profit, private sector organization dedicated to the improvement of Downtown Goldsboro’s 22-square-block district. The DGDC’s mission is to create and facilitate development, promotion, and preservation activities. Event with the city becoming a Main Street Community in 1984, and creating a department to emphasize downtown development in 1993, the commercial core of the city languished for years.

“When I first started in 1999, downtown was about 80 percent vacant,” Metz recounts. “There was not much going on here. The few businesses that existed shut down at 5PM. There was no night life; there was only one restaurant and it was struggling. In 2006, we were able to garner the support of the City Council to invest in our first Comprehensive Master Plan. That plan was intended to identify strengths and weaknesses and prioritize public sector investments that we felt would spur private investment and the revitalization of downtown to the vision that we had adopted for it. In 2007, that plan was adopted after a lot of public and citizen involvement. We then created renderings of downtown based on the Master Plan to try and depict the vision that we had. This helped us articulate what we were working to achieve.”

“Our office is in charge of selling that vision and trying to secure private investment,” Metz continues. “Through that process, we’ve been able to capture, in the last six or seven years, nearly $22 million worth of grants, and we’ve done some major infrastructure and redevelopment projects. We’ve done the Center Street streetscape, which is our main corridor through downtown. We’ve completed a couple of phases, to date, and we’re getting ready to finish with the third phase. That has resulted in a lot of private sector investment. In 2013, we got a TIGER grant, which stands for Transportation Infrastructure Generating Economic Recovery. It’s a U.S. DOT (Department of Transportation) grant that was originally created under President Obama’s administration. We got $10 million to knock out three blocks of that streetscape project as well as a couple of other things in the downtown area including the construction of a transit center. We received a second TIGER grant in 2016 for $5 million that we’re getting ready to start implementing in April. These great projects are really transforming the downtown area, and the private sector investment has now outmatched the public sector investment. We have apartments popping up on the second floor of once vacant spaces, and we are now entertaining interested investors from outside the city who are potentially positioned to invest millions in adaptive uses of upper stories into residential units. Additionally, there are a lot more restaurants, and we’re already receiving some interest from microbreweries. A lot of new businesses and new uses are following.”

According to Metz, all of the city’s initiatives have been purposefully designed to create a unique experience that will help separate Goldsboro from other city’s downtowns. “One of the things that sets us apart from towns our size is that we are out-of-the-box thinkers,” she avers. “We’re innovative and we have some consistency in our purpose. So, there’s a lot of art involved, and diversity, and interesting nuances that distinguish our downtown from anywhere else, including our historic buildings. It’s about using our unique assets,” Metz shared. “We are strategic in developing and convincing them to develop, a unique, distinctive destination. This work and method is also intended to help attract and keep millennials and post millennials, a rather significant group of people that are attracted to downtown living and represent our future.

“When we applied for the streetscape project with the U.S. DOT for the TIGER grant, they put a lot of priority on not only being innovative, but environmentally conscious,” she adds. “So, we created our project with that in mind. We’ve used materials with staying power that are energy efficient and aid in environmental quality, such as pervious materials where approved. In addition, all the materials that are used in this grant funded project are significantly made in the USA and meet requirements of FTA’s Buy America Policy. We had a lot of antiquated infrastructure underground when we did the streetscape project. So, it was not only an aesthetically, aboveground streetscape project, but a complete infrastructure replacement project intended to get us through the next hundred years.”

“A lot of this revitalization in the downtown has been very inspiring,” says Goldsboro’s Travel & Tourism Director, Ashlin Glatthar, “and we’re beginning to catch on how important it is to create demand, not just from locals but for people to come and spend and create tax revenue. Two main things have come about in the last couple of years. We opened a convention center called the Maxwell Center, which was, technically, a county project, but the land that it sits on is city land. Now, there is a 66,000-sq.-ft. convention center that sits on an emerging corner of our town. So, it’s going to push development that way. Since that hasn’t been open for a full year, we have not been able to track a lot of the ways that it’s influenced our visitation numbers, but I bet that this summer, when our state tourism office releases the numbers, I would expect to see them increase since that project’s been completed.”

“In April 2018, we opened the Bryan Multi-Sports Complex,” Glatthar continues. “It’s on 6,3 acres of land leased from Seymour Johnson Air Force Base and it’s the first pilot project between a military installation and a local government to come together and share resources. There are eight, all-weather soccer fields – six are natural fields and two are artificial turf fields. What makes this complex unique is that it sits on well-engineered soil; most complexes are built on condemned or unusable land. The complex is starting to receive notoriety for the fact that it can be played on all year round. Connect Sport has dubbed it one of the top soccer facilities in the U.S., and what also makes it unique, aside from how it originated, is the venue, itself.

“It has an amazing F-4 Phantom fighter jet  greeting visitors as they enter into the campus and on top of that that, you have F-15s and KC-135s taking off over you, so you’re literally playing under an air show. It’s become a prized possession, not just for the city, but it’s getting a lot of traction on a national level. Those two things have spurred visitation to our area, in addition to downtown. We’re already on track for a $1.5 million economic impact for the first year. We’re really pleased with that and the hotels are really pleased with that, as well.”

Erin Fonseca, Downtown Goldsboro’s Marketing & Events Manager, is focused on making the city a center of culture, art, and entertainment. “In the last couple of years, we have worked on our public art initiative, and have invested in installing public art pieces in the roundabouts along our Center Street streetscape,” she reports. “And what we’ve seen, which was somewhat unexpected, is that downtown has largely become a photo op. With that in mind, we’ve taken our efforts a step further. with a $25,000 Made on Main Street grant in 2018, we installed two new murals, as well as six crosswalk murals, and we hope to continue this effort. Additionally, our office, along with our non-profit, puts on about 40 events a year, bringing an estimated 90,000 people downtown annually. So, we’ve been on a roll, because downtown is starting to become a focal point for tourists, and we are providing experiences, , our local citizens , alike. We’re seeing a lot of support and investment. And it’s causing us to say, ‘What else can we do?’ We’re poised for takeoff.”

Speaking of takeoffs, one major event that takes place in Goldsboro is the “Wings Over Wayne Air Show” at the Seymour Johnson Air Force Base. It’s a bi-annual exhibition that attracted 230,000 spectators in 2017. This year’s show, set for April 27-28, will feature the United States Air Force Thunderbirds, the third-oldest, formal flying aerobatic team in the world. Spectators are in store for a big show that includes a myriad of air performances, exciting ground demonstrations, and realistic enactments that are sure to amaze spectators both young and old.

Check out this handpicked feature on Sanford, North Carolina – Leveraging its assets.

WHERE: In Wayne County, bordered by the Neuse and Little Rivers

Wayne Community College has been an essential organization in Wayne County since 1958. WCC produces capable, passionate, and qualified graduates in almost every industry. The Wayne Business and Industry Center offers several avenues for entrepreneurs and small businesses owners in the community including one-on-one counseling services, resources, and free seminars. 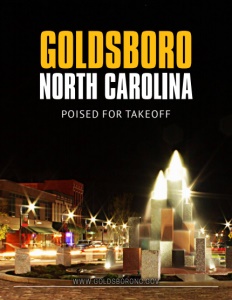