A place to call home

Business View Magazine interviews representatives of the Town of West Seneca, New York, for our focus on Economic Development in U.S. Communities

Erie County, New York is home to the lovely town of West Seneca. As an inner suburb to the city of Buffalo, West Seneca has both a perfect location and an excellent thruway system. The town’s 45,000 residents benefit by being a 15-minute drive from anywhere in western New York. Although that is a fantastic convenience, the community itself has vast shopping and dining options, first-rate schools, and extensive recreational facilities. West Seneca offers a suburban lifestyle and high quality of life by combining the luxury of big city amenities with the safety and serenity of a small town.

“I’ve lived in the town of West Seneca for all 58 years of my life,” shares Joe Kirchmyer, Executive Director of West Seneca Chamber of Commerce. “From what I see every day, it’s a very resilient town. We’ve had our ups and downs, like everywhere else, but we also have a strong workforce. We’re primarily made up of a lot of small businesses that during the pandemic found unique ways to quickly adapt. We’ve made it out the other side, which is great to see.”

Gary Dickson, West Seneca Supervisor, notes how the area’s strong neighborhoods also set it apart. Like Kirchmyer, many of the residents have lived in town for most of their lives. Dickson explains, “These are great neighborhoods. I talked to a 70-year-old woman recently and she’d lived in her house for 68 years. I think it’s the reputation and attractiveness of the town that there are people who would think of living nowhere else. That’s really a testament to the residents and to the feeling of neighborliness we all want to support.” 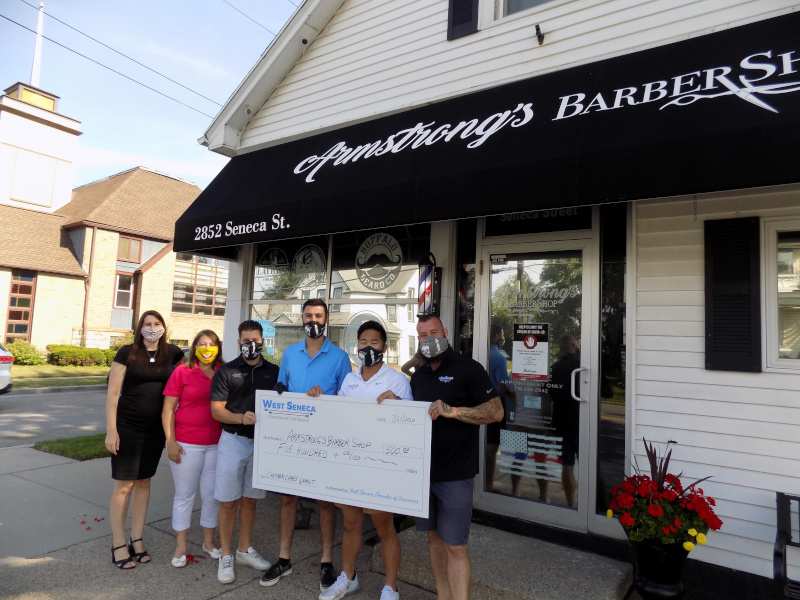 To help members recover from the COVID pandemic, the West Seneca Chamber of Commerce created the Chamber Cares Grant Program and awarded 25 grants to West Seneca businesses and organizations during the height of the pandemic.

Dickson describes how many of these neighborhoods are starting to change as some of the older residents are moving into patio-style homes. The majority of the houses are reasonably priced, so younger families are moving in and bringing with them a “refreshing spirit.” The entire area is experiencing a housing boom and is prepared with a diverse inventory of homes ranging from immaculately kept ones built in the 1960s and ‘70s to newly constructed ones costing about $500,000. Regardless of type or style, houses are often sold as soon as they are listed or built. Kirchmyer looks forward to the next few months when even more housing complexes will begin construction. But it’s not just the residential market that’s on the rise, it’s also commercial real estate.

“We do have a growing industrial park and a couple of corridors in town, primarily Ridge Road, Orchard Park Road, and Union Road, which are all generating a lot of interest,” Kirchmyer reports. “An interesting aspect is we also have a lot of large plazas; three in particular. Looking back a decade, the management was progressive in predicting the whole retail scene was going to change. They were proactive in attracting more service-oriented businesses like doctors’ offices and real estate companies. Now those three plazas are close to being 100 percent occupied, which is a great testament to their management.”

The largest employer in the area is the West Seneca Central School District, which is the third largest suburban school district in Western New York. The majority of town businesses are small and medium sized with anywhere from five to 24 employees. Dickson explains, “Even though some of our businesses are not large in a personnel sense, they have a big impact. Rosina Food Products, Inc. is building a meatball factory that will supply the whole country. We have transportation and logistics companies which are national. They’re not just local businesses; they’re businesses with a regional or national impact, which have chosen West Seneca. You may think it’s just a little of suburb of Buffalo, but there’s a lot going on.”

Kirchmyer agrees, providing the example of the Empire ONE Federal Credit Union, which recently joined the West Seneca Chamber of Commerce and has been a valuable employer and collaborator. “They’ve really stepped up with their sponsorship of our various events. They built a brand-new building here in West Seneca. It’s great to see them, as well as others like them, stepping up to the plate and supporting the entire community.”

Residents not employed in town commute to the nearby cities of Buffalo and Amherst. According to Kirchmyer, the majority of these commuters are “happy to come home at night to the calmness and comforts of West Seneca.” Wherever residents are employed, developing a strong workforce is essential to the town’s healthy economy. One key element is the Boards of Cooperative Educational Services of New York State (BOCES). For the past 70 years, BOCES has been partnering with school districts like West Seneca’s to offer hands-on vocational programs such as auto repair. On the industrial side, the U.A Plumbers & Steamfitters Local 22 union has a state-of-the-art welding and HVAC training facility where current and future tradesmen learn.

The Town of West Seneca and the West Seneca Chamber of Commerce entered into a partnership agreement in 2021 to run a new and improved farmers’ market in the heart of town. The open-air market runs Thursday evenings for 16 weeks during the spring and summer.

In addition to cultivating this resilient workforce, the West Seneca Chamber of Commerce is promoting the town as an ‘Arts in History’ destination. “We’ve created the Charles Burchfield Gardenville District,  encompassing nine historically and artistically significant sites,” says Kirchmyer. “It includes the home and studio of world-renowned artist, Charles Burchfield. That property is the keystone.” Across from the historic landmark is the Charles E. Burchfield Nature & Art Center, located in the same park which served as a source of inspiration for the artist.

There are also two historic churches: the Fourteen Holy Helpers Church dating from the mid-1800s and St. John’s Evangelical Lutheran Church with a beautiful stained-glass window. Another hallmark is the Christian Metz House, one of the oldest in the area. “I think a lot of other towns would kill to have something like this,” admits Kirchmyer. “We’ve had it in our own backyard all these years. Even though some of the buildings need renovations, just walking around Gardenville you really get a feel for West Seneca’s history and treasures.”

In order to protect these significant sites, the Chamber of Commerce is in the process of establishing the National Historic Preservation Act of 1966. Dickson explains this law will give the town more power, as well as benefits to the residents who own historic properties. It’s especially important since West Seneca has such a rich history – also celebrated within the town’s two impressive museums. The West Seneca Historical Society Museum is housed in the historic Lower Ebenezer Society House. Its three floors are packed with the history of the area, including a 1950s era Harley-Davidson motorcycle originally used by the West Seneca Police Department. The Firemen’s Memorial Exhibit Center is a tribute to all the firefighters and emergency personnel who have served in West Seneca and Western New York. “Their memorabilia collection is absolutely incredible,” says Kirchmyer. “There are two full scale vintage fire trucks on display. It’s definitely a hidden gem.”

On the ‘green’ front, new electrical vehicle (EV) chargers are being installed in the Town Hall complex. The four, level 2 charging stations will be located in the parking lot of the Community Center and Library. Travelers will see the station via an app and can charge up while enjoying a SPoT Coffee beverage or library book. Some of the West Seneca building roofs even have solar panels. Dickson points out, “We also have an Environmental Commission that is preserving some of the community’s natural areas. We have about three creeks through town that volunteers regularly help clean.” Those creeks are also available for recreation, along with the West Seneca Soccer Complex, which in the past has hosted the Gaelic Games. The community also has “very robust softball programs for children,” as well as many soccer clubs and even Little Loop Football. This summer a new multi-game court is being installed and even a bike track. Kirchmyer emphasizes, “There’s all kinds of programs here; all the ones I grew up playing and still enjoy today.”

Looking to the future, Kirchmyer, Dickson, and the Town Board would like to purchase two properties that ‘bookend’ West Seneca. Kirchmyer believes acquiring both would really put the town “on the map.” The west end property used to house the Seneca Mall, which was demolished 26 years ago. Currently the property is privately owned with a grocery store on the premises. The east end property comprises hundreds of beautiful acres owned by New York State. It used to be the location for the West Seneca Developmental Center site, which closed in 2011. Kirchmyer acknowledges, “It would cost approximately $18 million to clean up the property and the buildings. We would love to have a walkable village, which could happen if we acquired those properties. We want to transition the land into something special; something that reflects the neighborliness of our community.”

What: A refreshing, historic suburb of Buffalo; population 45,000

Although we’re relatively new to West Seneca, we’ve been servicing the Western New York region for over 85 years. Empire One strives to assist our community members to achieve their version of financial success, and we are looking forward to building upon the current and future relationships we have created.