July 2016Past IssuesSupply Chain and Logistics

The Port of Palm Beach is located on Florida’s Atlantic coast, about 80 miles north of Miami and 135 miles south of Port Canaveral. The Port of Palm Beach District covers a land area of 971 square miles or approximately 50 percent of Palm Beach County, while the port, itself, covers 162 acres. It’s the fourth-busiest container port in the state and the 18th-busiest in the nation, functioning largely as an export hub, with approximately 80 percent of its cargo heading outbound, primarily to the island nations of the nearby Caribbean region.

The area in which the Port is situated has been utilized as a shipping hub for nearly 150 years; early settlers and their descendants worked to build and improve access to waterborne commerce on the northern shore of Lake Worth. In 1915, industrialist and railroad magnate, Henry Flagler, approached General George Goethals, the head engineer of the Panama Canal, to oversee a construction project at the Lake Worth Inlet, which was being used as a transshipment point for lumber delivered by rail from Central Florida and points north to the Miami area by barge. The Lake Worth Inlet District, later to become the Port of Palm Beach District, was subsequently created by the Florida Legislature to formalize the efforts towards inlet maintenance. In 1935 the federal government assumed maintenance of the inlet and its channels as part of the Lake Worth Inlet/Palm Beach Harbor project, and the District assumed local partner responsibilities with the federal government for port operations.

Today, the Port of Palm Beach District is an independent, special taxing district. It is governed by a Board of Commissioners elected at-large by the voters within the District. Its administration is through an Executive Director and professional staff of approximately 50 employees. The Port is a landlord port and maintains all piers, docks, dredging, and improvements to District-owned properties. The turning basins, which are within the Inlet, are federally-owned and managed by the U.S. Army Corps of Engineers.
Shipping and passenger services are provided by tenants under long-term agreements with the Port. All maritime services are performed through privatized, licensed permit holders including agents, stevedores, warehousing, and chandlers. Pilot and tug services are also privately owned. In addition, the Port owns and operates five miles of rail, and train operation is done in-house by Port staff.

Manny Almira is the Port’s current Executive Director. He talks about some of the necessary upgrades and major improvements that the Port is now making, as detailed in its Master Plan which lays out significant objectives to be achieved between the years 2012 and 2022. “We are one hundred years old,” he begins. “Therefore some of the Port’s infrastructure, while we maintain it on a daily basis, needs some required attention and sometimes replacement. We just finished a $26 million project that consisted of the redevelopment and reconstruction of our southernmost slip, Slip Three. All of the sheet piles that hold the earth from bleeding into the water were replaced, an additional three feet of depth was added, and the entire slip was moved to the north to allow for future development to the south.

Another item on Almira’s list is a redevelopment of Berth 17, south of Slip Three. “Berth 17 will be our southernmost berth at the Port,” he explains. “It’s a notch that we’re cutting in so that small roll-on/roll-off vessels can work on that particular berth. We’re also considering that berth for a possible rail/barge service. We have been discussing that plan with railroad companies and there seems to be a very high level of interest for that future use. We did it in the past, so we’re back to the possibility of having a rail/barge service to Cuba. In 1957, the Port of Palm Beach had more cargo to and from Cuba than any other port in the United States. I’d like to duplicate that. It’s a tall order, but nothing’s impossible and it could develop into something bigger and better than it was back in the 1950s.”

Meanwhile, as the efficacy of trade with Cuba is being determined in the political sphere, the Port’s largest tenant is a company called Tropical Shipping which offers day-to-day cargo services to and from the Caribbean basin. “We also have a major distributor of raw sugar from Palm Beach County. The raw sugar is transported through the Port of Palm Beach on barges, then up to the New York area.”

Almira stresses that the ocean-going traffic up the east coast of the U.S. helps relieve road traffic congestion, particularly on Interstate 95.“On an annual basis, we move between 600 and 700 thousand tons of sugar,” he states. “If that volume of cargo were to be placed on trucks that go from Palm Beach all the way up to New York, you’re talking about 6,000 trucks. If we were to not be here tomorrow, you will immediately have 6,000 trucks on I-95, which is exactly what we don’t need.”

When asked if the Port has to compete against others in the state and region, for business, Almira responds thusly: “The competition is really done at two levels below us,” he says. “An individual exporter or importer, an individual freight forwarder or custom broker, and shippers and consignees are the ones who select which service will bring them from point A to point B. That being said, each port has similar services. For example, we have Tropical Shipping. Tropical Shipping then competes with Crowley [Maritime Corporation] that happens to be in Port Everglades, or the likes of Seaboard Marine that happens to be in the Port of Miami. So, we compete, however, we really do not, as a port.”

He then goes on to explain how some ports have carved out particular niches for themselves: “For example, south of us, Port Everglades specializes in fuel and fuel products. Over the years, they have developed an infrastructure to be able to offload these gigantic tankers that come in with either aviation fuel or gasoline. That infrastructure is there, so that’s a niche market-type port. Miami, for example, specializes in container activity from the Far East and Europe and they are world-renowned as a cruise port. We, on the other hand, happen to have a little bit of everything. We import fuel, every now and then; we will import asphalt every now and then; we have steel; we also have container activity; and we also have cruise activity. So, looking at us, we’re the little guy that does a lot.”

The Port has, however, carved out a niche for one of its important customers: the Grand Celebration is the exclusive cruise line at the Port of Palm Beach, and according to Almira it is there because it chose not to be “a small fish in a big pond, but a real big fish in a very small pond. We are their home port; they are here every other day,” he says.

According to Almira, the economic impact of the Port on many communities, both near Palm Beach and beyond, is significant. “Because of the Port of Palm Beach, there are 3,000 jobs that are directly impacted by us being here,” he says. “Another way of looking at it is, if tomorrow, the Port was to be converted into condominiums, there will be 3,000 jobs lost in the marketplace. The Port provides a $2 billion, overall economic impact. It contributes over $185 million in business revenue and $17.5 million in annual tenant-contributed state and local taxes. And in the event that the Port is ever impacted negatively, say by a hurricane, and is closed by the Coast Guard for any length of time, “40 percent of the food that gets distributed in the Caribbean basin would not get to where it needs to go,” Almira adds.

While Almira admits that the Port has a relatively small footprint, it still boasts of being the most efficient container terminal in the United States. “You measure efficiency by how many containers an acre handles on a yearly basis,” he explains. “Tropical Shipping is able to handle over 7,500 containers per acre, per year. The average up and down the U.S. east coast is somewhere in the vicinity of about two to three thousand.”

Efficiency is also the watchword when it comes to the truckers who must pick up and offload those containers in a timely fashion. “If truckers don’t have an easy time to get in and out, you’ll hear about it immediately,” Almira says. “Their ability to make money depends on their ability to deliver and pick up containers or bulk cargo of any sort. That’s why I stress that that connection has got to be the least amount of time inside the Port. We cannot have congestion in this Port. You have to be in and out of here in less than a half hour. If it takes more, there’s a problem.”
Now that the Port of Palm Beach has crossed the hundred year mark, Almira is looking toward the future: “I strongly believe that the Port of Palm Beach will play a major role in the Cuba trade,” he says. “We’re sitting in a perfect geographic location and our access from the hinterland, through the Port, to a final destination – not only to Cuba, but to other ports – is enhanced by our rail connection, as well as by our roadway connection – the so-called ‘last mile,’ which is only improving. Martin Luther King Blvd., which is the main road coming into the Port of Palm Beach, is going to be expanded into a four-lane highway. I hope that by five years from now, I-95 will have a direct exit to Martin Luther King Blvd. Our rail expansion is on the way. We are now looking at our first phase, which will be to enhance the entrance of the rail into the Port. And I think that five years from now, we’ll definitely have another cruise line here and I strongly believe that Tropical Shipping most likely would have expanded into other areas in the America’s hemisphere.”

Almira gives all the credit to his crew of 50 employees who see to it that all of the Port’s operations continue to flow smoothly and efficiently. “What I’m really proud of is our staff, and as cheesy as it may sound, we are here to help,” he states emphatically. “And when we get a phone call or anyone raising a question, we will be there to respond to it and make sure that the challenge goes away. That is my commitment to this Port. I’ve worked at other ports a lot bigger than Palm Beach, but certainly none as friendly.”

Check out this handpicked feature on The Ports of Indiana.

WHO: The Port of Palm Beach

WHAT: The fourth busiest port in Florida 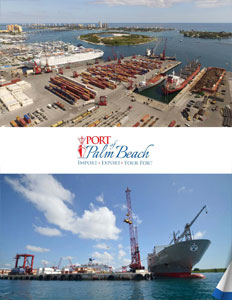